A Break From Elk Season! Female Cardinal and A Wedding

It's time to take a break from the elk season reporting and enjoy a picture of a female cardinal. I have been spending large amounts of time afield trying to photograph the whitetail deer rut, but have not been seeing as many deer as usual. I erected a bird feeding station in a rockbreak near my favorite photography stand. I only see a few species such as nuthatches, different sub-species of sparrows, and cardinals. 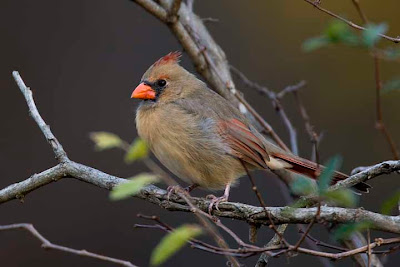 Canon 40D-500mmF4 1.4X extender
I have to travel Elk County to videotape a wedding. The happy couple are both lovers of the outdoors and they are going to have the ceremony outdoors if the weather permits, but light snow is in the forecast. This should be a unique experience. After I return I will bring the Elk Hunt Chronicles to a close.
Posted by Willard at 8:42 PM 12 comments

I failed to mention that it turned colder Monday with increasing clouds. Rain showers were in the forecast. As it grew late the clouds thickened. Sometime after the hunters went into the area where the 6x6 stayed, there were a few drops of rain. Shortly before darkness fell, I was astonished to hear the boom of thunder. It was about one mile to the vehicle so I left, walking as quickly as possible, but it was soon plain that I was not going to win the race. It began raining heavy enough to damage the cameras so I covered the camcorder and tripod head with a large trash bag and placed the DSLR safely in my shoulder case. Next there were occasional blinding flashes of lighting. This was weird weather for November. I did make it back to the vehicle without incident, but then it began to rain heavily and continued most of the night.

Tuesday came in with light showers and a strong wind from the northwest, which made it brutally cold. I originally intended to spend the day in the backcountry, but re-thought my strategy. What was I going to prove anyway? I likely wouldn’t see anything considering the weather conditions. It seemed likely that I could get a better handle on the hunt by driving the road and checking strategic areas.

To my surprise a herd of elk was at The Gilbert Viewing Area and one of them was a 7x6 bull. I videotaped him at long range with the XL-H1 and 300mmF4 lens. I forgot to take a shot with the card camera function so the picture, which you see, was captured to the memory card by playing the tape back in the camera. This meadow is in the No Hunting Zone. 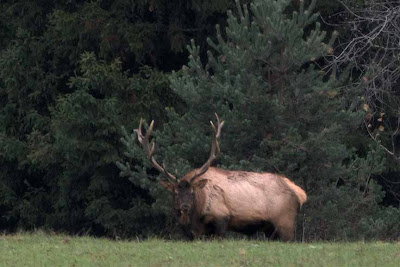 7x6 Bull Gilbert Viewing Area
I found a pickup parked in a nearby Pa. Game Commission parking lot, so it was obvious that someone was hunting the reclaimed strip mine area. The truck was still there at dark. 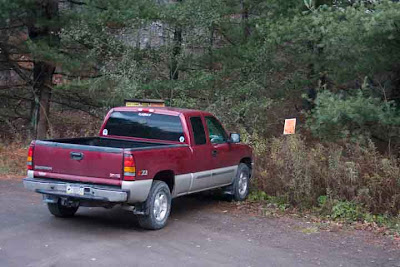 Elk Guide's Truck
I drove several back roads and quickly found that there was little hunting pressure, but closer consideration made me realize that with 40 hunters out there and some of them assigned to other areas, that one was unlikely to see a large number of hunters in any given area. It may have looked like nothing was happening, but this was far from the truth. In fact the process was quite deadly.

Most hunters hire a guide although the law does not require their services. It is a problem if one kills an elk and has no method to retrieve it from far back in the woods. A guide solves this problem quite nicely. Also, if one is not familiar with the area it may be difficult to locate the elk. The better guides are deadly at finding large bulls, locating where they feed and sleep, and putting them in the sights of the hunter’s rifle, and that is exactly what happened in many cases.

Hunters must report their kill to Game Commission authorities and must mark the site of the kill and a path leading to it. Each kill sight is numbered. I do not know for sure, but I assume it is the elk license number. I found a kill site marking along Dent’s Run Road where the Elk Trail leads to a complex of meadows known as Bear Hollow.
A Game Commission vehicle was there and the officers were most likely checking the site when I took these photographs. The check includes making sure that the animal was not killed over bait, which is illegal in Pennsylvania, and biological samples are obtained from the entrails, which are usually left at the kill site. 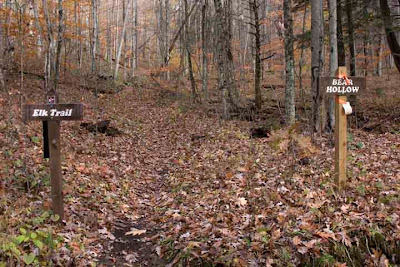 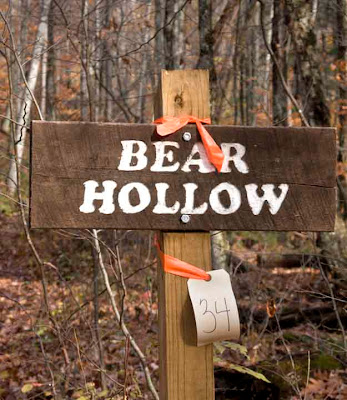 PGC Vehicle
It didn’t seem that a lot happened in the past two days, but I was to find out on Wednesday that this was not the case. Stay tuned for more reporting. 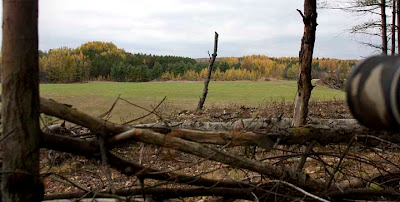 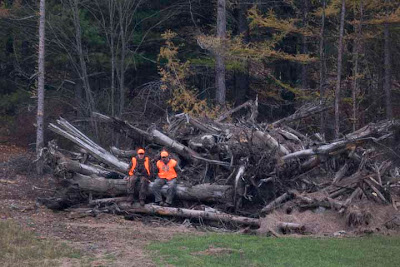 A hunter's support team wating for him 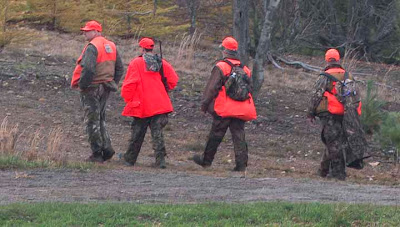 In mid-afternoon two groups of hunters arrived in rapid succession and one group went directly into the area where the 6x6 was staying. There was no shooting which could mean that he had moved to another area, the hunter had a cow permit, or he was holding out for a larger bull.

You will notice that there is more than one person in these parties. Many, if not most hunters hire a guide, and they are also permitted by law to take as many people as they desire with them to observe the hunt and assist with handling an animal after it is taken. These people are required to wear blaze orange, but they are not required to have a hunting license and they may not carry a firearm or herd or drive elk to the hunter. Only the shooter must have a valid hunting license and elk permit.

Other points to consider are: 1. If one disturbs animals before the hunt to make them more wary, they can be arrested for harassing or disturbing wildlife. 2. If they purposefully frighten the animal during the hunt to prevent its’ taking, they can be charged with interfering with a lawful hunt.

After a mid-day break on Sunday I returned to the backcountry-this time to the reclaimed strip-mine where I photographed elk earlier in the rut. I was looking for elk of course, but my primary mission was to determine if the area was going to attract hunters in the morning. No elk appeared, but two separate groups of people did, and by their actions it was obvious that they were discussing hunting strategy for the next day.
I was using my Canon XL-H1 High Definition video camera in this case with the Canon 300mmF4 attached. When a Canon 35mm lens is attached to this camera it increases the power of the lens by a factor of 7.2 so that the lens is in fact the equivalent of 2,160mm.
The downside is that it gives a dismal image in poor light and one may not crop it to a great extent (in card camera mode). This camcorder delivers superb video which can be bettered only by cameras in the $30-100,000.oo price range, but it is a lackluster performer as a still camera, with most any point and shoot camera being able to deliver a better still image. They cannot: however, deliver detail at the extreme ranges that this camera can. Gaussian Blur was applied to the faces so the individuals are not readily recognizable. 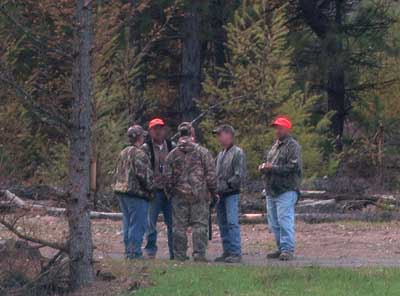 Scouting for the next days' hunt?

Monday morning was bitter cold and frosty with a heavy fog and I was on station near where I saw the 6x6 well before dawn. When it was still too early for photography I could see the faint outline of an elk moving through the thick fog very close to me, but when I looked in my binoculars I could not find the animal. It seemed likely it was the bull, but I was not certain. Sometime after he went out of sight I heard antlers smashing against branches as an elk horned a tree. Shortly thereafter I heard a growling call from behind me and then a few elk bugles, but I was certain that this was a hunter trying to attract an elk by calling. 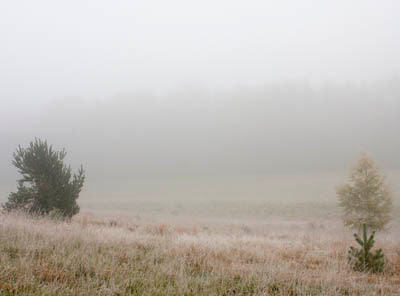 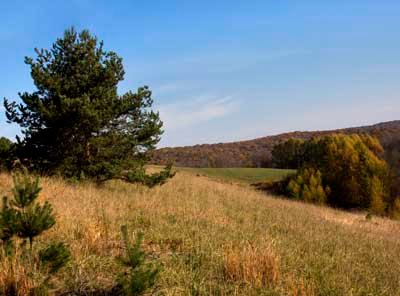 In time the fog lifted revealing a beautiful autumn morning.

After taking a series of photographs of the area ,I walked to the reclaimed strip mine without spotting one hunter, but that situation was going to change. There was no doubt that hunters were in the area.