We spent last weekend with our daughter Amy. She loves nature photography, so she accompanied me on Sunday morning when I traveled to Middle Creek Wildlife Management Area in Lancaster County for a morning of waterfowl and general wildlife photography. 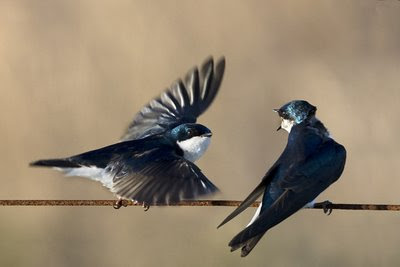 Tree Swallows: 500mmF4-1.4 extender
The area is best known for the massive migrations of Snow Geese and Tundra swans, but this activity was over and only a few of these species remained. We were hoping to photograph the many species of ducks that visit the area and did have some success. Perhaps the biggest problem with Middle Creek from a photographer's standpoint is getting close enough for satisfying close-ups, even when one uses the big telephotos. 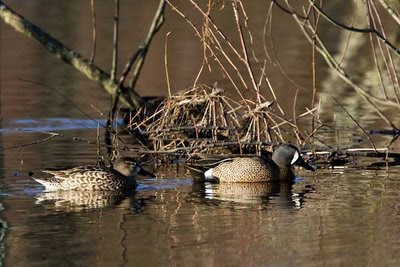 Blue Wing Teal500mmF4-1.4 extender
A fellow blogger recently inquired as to when Great Blue Herons arrive in Pennsylvania, and I didn't know the answer. We saw three on this trip (I could only get two in the photo at once), so they are here by early April, but I don't know if they return sooner. 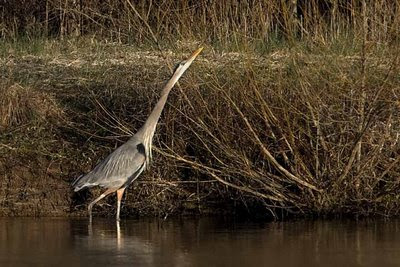 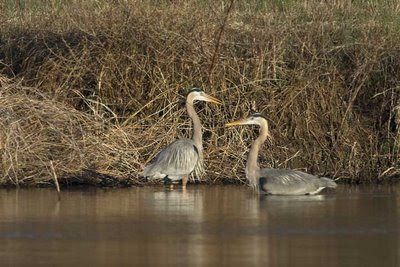 To see our daughter's photos visit Ash's Eye on the World.

Tuesday was more reminiscent of late fall than of early spring with a bitter chill in the air and strong gusts of wind from the northwest. Dawn found me concealed by the edge of a mountain meadow with the 500mm F4 and 40-D mounted on the tripod, hoping to sight wild turkeys.

I was not to be disappointed as soon after dawn turkeys began appearing with young gobblers known as "jakes", coming quite near me. Soon I heard a thunderous gobble in the distance and saw a large mature bird coming toward the jakes. They hunched over, began shuffling their feet, and rubbing their legs together. Sometimes they even lowered themselves completely to the ground. 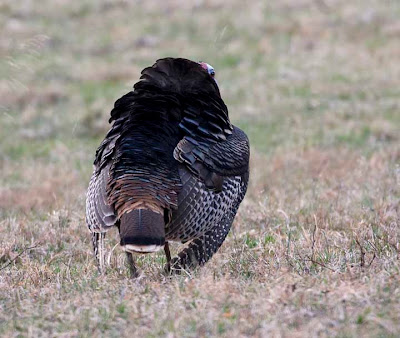 Dancing ?
The mature gobbler stopped quite some distance away and began doing the same thing.
I have not read about this behavior, but it has to be some sort of challenge to the other birds as the mature bird did not approach closer. 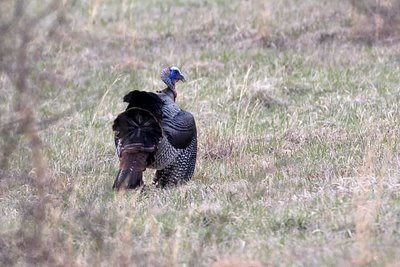 The posturing continued for some time and then the jakes stopped shuffling and ran at the mature bird. 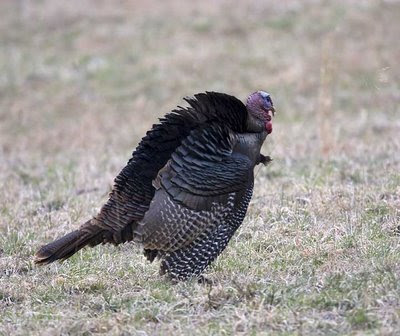 What Is He Doing?

The large bird fled to the opposite side of the meadow and they stopped pursuit so he quit running and spent nearly an hour posturing and strutting. This began before sunrise, when the light was poor, but fortunately continued until the rays of the sun hit the bird and showed the colors of the plumage to best effect. 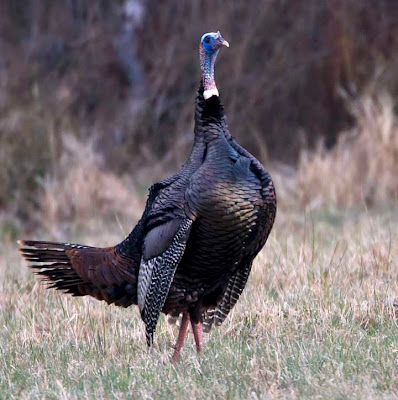 "I can't believe I ran from those little boys"
It seemed strange that the jakes intimidated the large bird, but evidently he was no match for that many determined young gobblers. 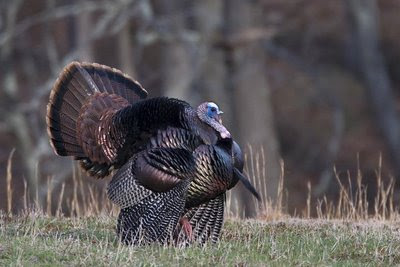 "Showing Who Looks The Most Impressive"

That evening two large gobblers had a violent fight. I saw one skirting the edge of the meadow at extreme range. He went into the edge of the woodland and I was recording him with the XL-H1 and 100-400mm, when another gobbler arrived. The fight was so intense that I could actually hear the impact of the wings beating against each other at over 300 yards of distance.
Unortunately there was quite a bit of intervening brush, making filming difficult, but it was nonetheless one of those rare moments that one never forgets, as in fact was most of the events of this blustery early April day.
Posted by Willard at 1:56 PM 17 comments