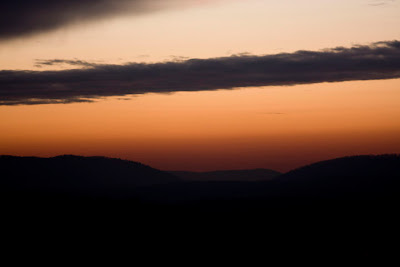 I cannot get a got photo of the sunset from where I usually watch for wildlife, but on the evening of the day after Christmas I manged to capture this sunset just a few moments before the color was gone from the sky. Taken with a Canon 40D and 70-200mm at 70mm, ISO 100 with 2 stops underexposture.

I had no idea of trying to post a video clip today, but the desire to experiment surfaced, and I thought what better way to demonstrate what the Canon L2 was capable of than to show a fight between two monster bulls, which occurred during the rut in 1997.

It's working for me now, but I don't guarantee anything! It starts with a fade from black and ends in that too.

I have recorded two fights in twelve years of videotaping elk. They “spar” quite frequently, which can be likened to arm wrestling among humans, but actual combat can be intense and sometimes results in death to one or both of the animals. This is most of the first fight I witnessed, with a bit edited from the center. The other lasted about ten minutes.

One Bull has a unique deformed rack. He was named, “Crazy Legs” by Dr. Perk. I asked him, why? He replied, “Because he likes to travel”. Unfortunately he traveled too much and was killed much later by poachers some distance away from Winslow Hill.

As best as I can tell the other bull was killed in the first elk season in 2001.
If I remember correctly this was taken with the normal lens and 2x extender.
Posted by Willard at 6:58 PM 14 comments