Ever since my first visit during the autumn of 1998 I have traveled to Shenandoah National Park in Virginia to observe and photograph the whitetail deer especially during summer and autumn.  As time passed I went more and more often and felt reasonably safe in assuming that regardless of what befell whitetail deer in all of my other favorite spots that the deer of Shenandoah would be there.  I must confess that having worked for the Pennsylvania Game Commission most of my adult life, and therefore being very aware of deer management issues, that a bit of concern did exist in the back of my mind that the National Park Service could also fall victim to the malaise that has effected so many agencies and pursue herd reduction strategies to an unacceptable extent.  This concern was further heightened by the increasing prevalence of  CWD (Chronic Wasting Disease), nevertheless I was shocked when the NPS, suddenly and without warning to the public, collared and/or ear tagged most of the bucks and many of the does at the prime whitetail spots such as Big Meadows and Skyland.  The collaring was an integral part of a CWD and mature whitetail buck movement study.   Public meetings were also held to determine if herd reduction would take place at the spots of major deer concentration within the park either immediately or when CWD was detected  within a certain distance of the park.  Much of this subject has been covered here before, but I will remind readers that well known Virginia wildlife photographers Larry W. Brown and Jim Fields have done an excellent job of bringing this matter to our attention and keeping us updated on it.  For those who have not read it yet I would recommend that they read CWD The Truth by Numbers  by Larry W. Brown.  This well researched article contains a wealth of information on the subject.

The buck shown in today's first photo was a large mature buck that was a favorite with the whitetail photographers at Big Meadows.  Many feared he was missing when he was not seen for a time after the collaring was done, but he was eventually photographed with  a large collar numbered H2.  I only went to SNP once during the rut of 2012 and was so disgusted that I left after only 1/2 day there.  Well known Pennsylvania photographer Billie G. Cromwell did stay for some time and was able to photograph the buck after he was collared.

I did intend to make a few day trips to the park this year to personally check the situation out, but after reading reports from Larry W. Brown that the whitetail photography was terrible at Big Meadows I did not go.  With advancing age I find that the 300+ mile round trips are not  as appealing as they used to be, especially when there is not great likelihood of getting exceptional whitetail photos.  Billie Cromwell did spend a few days in SNP last week and was gracious enough to share a few of his photos with us.  He did photograph "Old Rutter".  This once magnificent animal was now suffering from the effects of advancing age with his rack declining in size.  It is possible that the marked decline in rack size was triggered by the trauma of being tranquilized and fitted with radio collar, but as mentioned he does seem to be an old animal.

This is not the worst part of the story; however.  Many have pointed out that these collars do not fit the animals well and may cause significant hair loss and skin damage. Such is the case in this situation.  I cropped the photos above severely so that the problem areas are easier to analyze and they are shown below.  These photos were taken with a 5D MK III and 300mm f 2.8 lens, but the animal was too far away to get fine detail and sharpness at this degree of enlargement. Note the collar is out of place and in front of the ear on one side, while the hair is missing over a wide area under the collar and the skin appears to be damaged with at least some sores present. 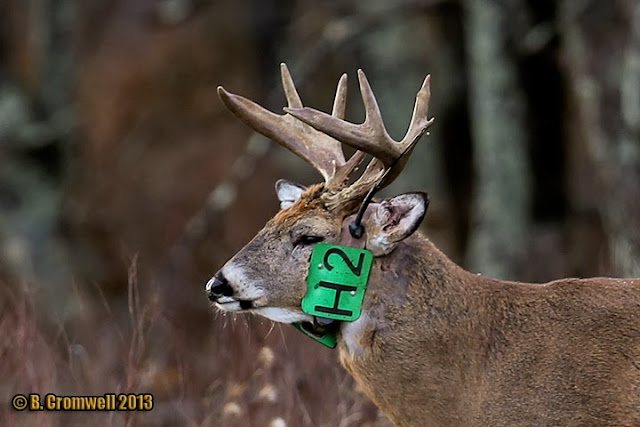 It amazes me that is legal and acceptable for the NPS to inflict this kind of damage and distress on an animal, yet had Billie walked close enough to the buck to get detailed close-ups of the damaged area it is likely, had he been observed doing so by enforcement personnel, that we would have been warned to not approach so closely as it could cause the animal undue stress and it is even possible he would be arrested.

Billie reports that there were a 4-5 does using the meadow on a fairly regular basis and he saw a few small bucks in the woods around and going to the campground.  The situation was so bad that it did not even seem like Big Meadows.  He did encounter one buck in the woods along the drive south of Big Meadows that did not have a collar and give him a photo opportunity.

Whitetail viewing and photography should recover in time if the herd is not reduced, but considering the numbers of whitetails seen this fall, many are wondering if the herd reduction has not already secretly taken place.  There are very few things that can impact the visibility of park deer.  One and would be a lack of food on top of the mountain, but in years with a poor mast crop, deer are usually concentrated around the open areas such as Big Meadows and so sightings should be higher.  A heavy mast crop could keep sightings in the meadow down, but they should be seen in plenty elsewhere along the drive. As I have not been there this fall, I do not know what the mast crop is like, although it is very poor in our area. Whatever the case one cannot recommend that a serious whitetail photographer visit SNP at this time.

Again I wish to extend a special thanks to Billie Cromwell for most of today's photos and to Larry W. Brown for this efforts in educating the public as to the truth about CWD and the situation at SNP.