It seems there are few hard and fast rules in nature. It is commonly thought that male wild turkeys, known as gobblers, seldom gobble except during the mating season. In our area of Pennsylvania, mating or "gobbling season", ordinarily begins with the first warm weather in March and comes into full swing in early April. Activity dwindles in late May and is ordinarily over by mid-June.

The flocks of turkeys featured in this post have never figured this out and periodically gobbled and strutted throughout the past winter. The turkeys in the photo below are young gobblers, which many refer to as "Jakes". This is how turkeys look most of the time in winter. 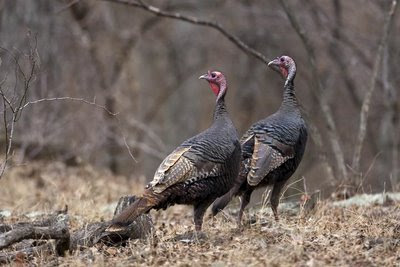 The photo below portrays a mature gobbler with tail fanned out and head partly swollen. It is amazing how a gobbler's appearance changes as he goes through the strutting and gobbling ritual. 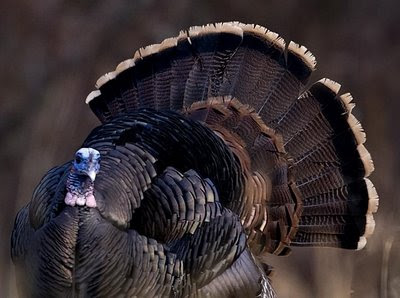 Even though they are primarily woodland birds, turkeys like to visit meadows. This was one of the most amazing turkey experiences I have witnessed. One flock of birds was on a ridge behind me, while another was in the meadow in front of me. 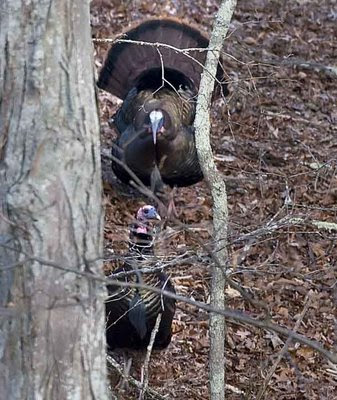 Gobblers On Ridge
One flock gobbled in unison and the other replied. This continued for several minutes and made the valley ring with thunderous gobbles. 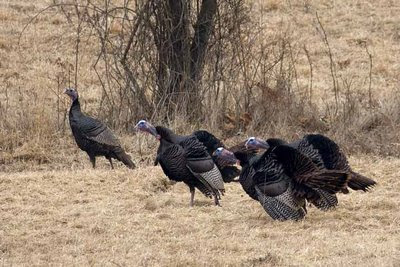 "Mature Gobblers In Full Gobble"(hen or jake to left)

It may have been aberrant behavior, but it made for an interesting winter. It is sometimes difficult to tell in a still photo whether a bird is a hen or a jake, but if one came observe it moving about and view it from different angles, it is usually possible to make a positive identification.

Brush Or No Brush? The Bald Eagle

This is a somewhat redundant post as the second photograph was published last month, but I decided to post it along with another shot of the same encounter with the bird. I am curious as to other photographers opinion about the branch passing in front of the head in the first photo. Does the branch detract from the photograph, or is it an asset? Does it add a more "wild" aspect to the photo or does it detract from the composition by obscuring important detail? 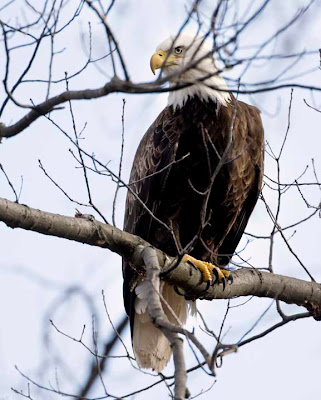 Any input is appreciated.
Posted by Willard at 2:36 PM 13 comments