Friday September 29th was the last day of my 2000 trip to photograph the elk rut.  I like to get an early start for home so I decided to drive up Winslow Hill to check the viewing areas and the roadside meadows for a few hours before leaving.  Billie Cromwell, who shot a lot of the rut footage for the Game Commission's elk video, "Pennsylvania Elk: Reclaiming The Alleghenies"  rode along that morning.  I can't recall everything we saw, but the highlight  was when we found two bulls chasing cows in an overgrown meadow  near the Devil's Elbow area. 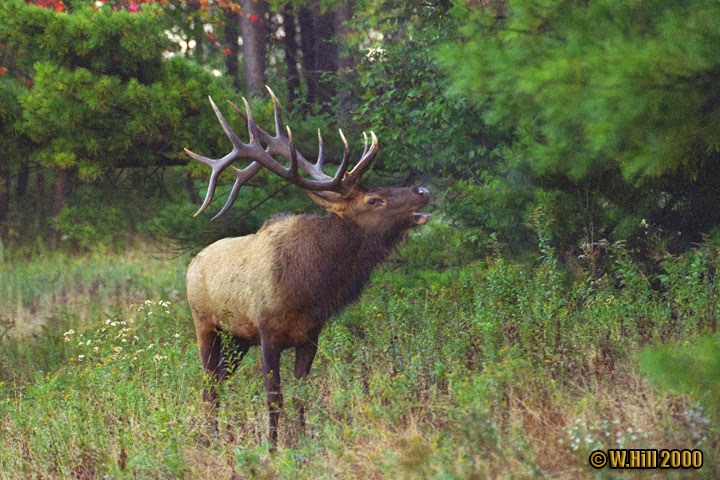 This was before the days of digital and meta-data files that records camera settings so one had to rely on memory or notes to recall what equipment was used. I was a poor record keeper, but if my memory serves me right the above photo was taken with a Canon Rebel X with Kodak ISO 800 print film.  The lens would have been either a 75-300 EF IS, or a Canon 35-350 L lens. 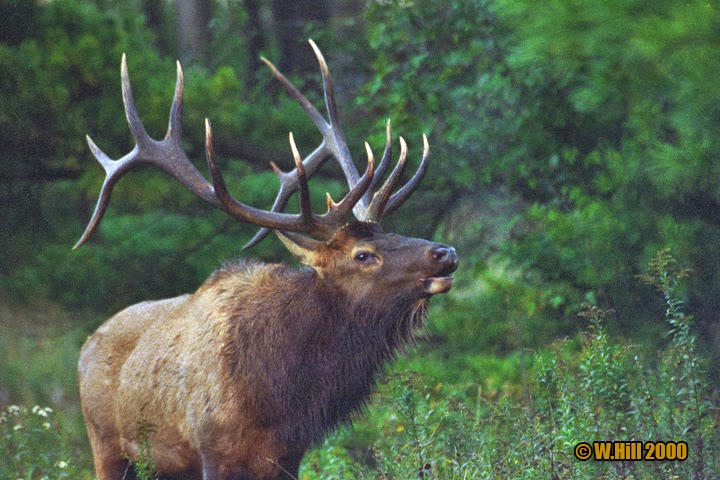 I began photographing in 1974 with a Minolta SRT 101 and 50mm 1.7 lens and eventually bought several low to mid-range telephoto lenses.  I used these lenses with a variety of Minolta bodies until late 1990 when I switched almost exclusively to video.  I got the Canon L2 camcorder in 1997, which accepted Canon mount 35mm lenses by use of an adapter and bought a Canon 75-300mm EF IS lens for long range work.  This move eventually led me back into still photography.  The Minolta equipment was old, battered, and outdated.  Shooting stills with it meant that one had to carry lenses and cameras for two different mounts, so it was a no brainer to get a Canon body for use on the 75-300mm.  Since my primary focus was video I bought an entry level Rebel X with kit lens for $180.00 at Walmart.  This was $70.00 less than I paid for the SRT 101 and kit lens back in 1974. The Rebel felt chintzy compared to the Minolta SRT cameras, but it was much more reliable as a lot of the moving parts had been replaced with electronics as technology advanced.  As is so often the case with me, I soon decided that I needed another camera body so that I could shoot both slow and fast color film, so in August of 200 I bought a Canon Elan II body, which I carried loaded with Kodak ISO 200 print film, while the Rebel was loaded with Kodak ISO 800 print film.

Light levels were low when this encounter began so I photographed the larger bull with ISO 800 film and then switched to the Elan II and ISO 200 to photograph the smaller bull. 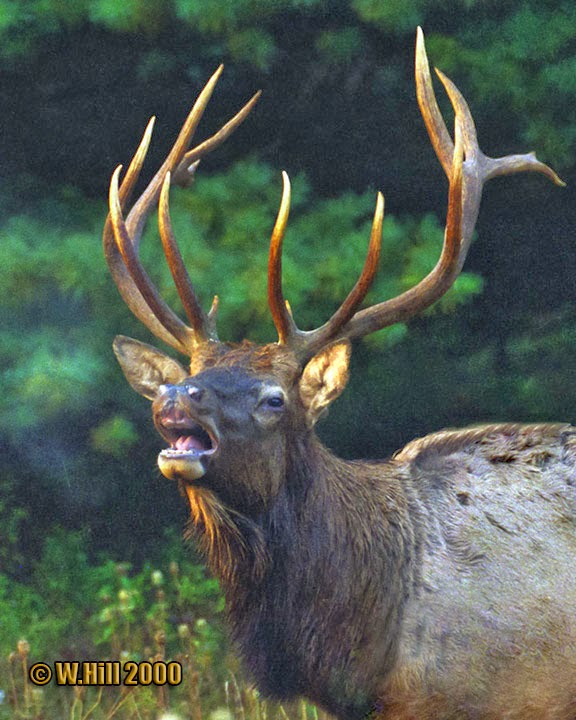 Both bulls were 7x8s if I am counting the points correctly.  The photos were scanned to digital files with a Canoscan 2710 several years ago and were reworked in Adobe camera raw with final tweaking in Photoshop CC before posting. I was searching through my files for photos of bull 36, better known as "Fred" or "Dogrope", when I came upon these photos and felt moved to share them.  One must realize that film ruled at the time. I was dreaming of better lenses and camera bodies, but the though never crossed my mind that film  would be  replaced with digital in a few short years.

Those that are relatively new to Pennsylvania elk photography may be amazed to find that high end professional lenses were rarely seen on Winslow Hill until after digital replaced film.  Ronald "Buckwheat" Saffer had his Canon 300mm f2.8 L lens, a gentleman was there each year with a Nikon 500mm and I saw well known outdoor writer Bob Steiner on a few occasions with his 500mm Nikon, but mostly one saw point and shoot cameras and entry level 35mm SLR cameras with low to mid-range lenses.  Back in those days you could draw attention shooting a 100-400mm L lens with people walking up and saying, "that's some lens you have there".  Now all of the big primes such as 300mm, 500mm, and 600mm are commonly seen and I think it is because of digital.

In the days of film a serious shooter spent a lot of their funds available for photography on film and processing. The ability to shoot massive numbers of shots and delete unwanted ones in the digital age made it possible for many more people to become better photographers and to afford to buy better equipment.