In my experience, if one is able to observe an extended family group of whitetail deer on a regular basis, it is possible to learn to identify individual deer. It is as though the veil is lifted from ones eyes and they are able to see the differences in features that distinguish individual animals, rather than the similarities that many cause one at first glance to say that all fawns look alike, or that all does look alike, when in fact they do not!

This photograph was taken on the evening of June 29th. Compare it to the photo in the previous post, and note the difference in the facial features of the two deer. It is quite striking when one looks closely! This evening four fawns came to the meadow. Of course I am without a DSLR at present, but I had the superb Canon XL-H1 Camcorder and concentrated on filming the little animals as they flitted about the meadow. It was overcast and likely would not have made good still photographs anyway. In addition the fawns were so active with their running about and playing that it was hard to get good video segments of them and good still photography would have been even more difficult.

Summer mornings with dramatic lighting-the grain fields are ripening and the odds of capturing a bachelor group of mature whitetail bucks on memory card or tape are improving almost daily, as the deer are attracted to the ripe grain. Dry summers are the best for seeing deer in these types of fields as the animals come to the lowlands in search of moisture and more succulent browse. This year has been very wet , and so far I have not seen a large buck. Canon 40-D: 17-40mm at 17mm- 1/ 500 sec. f8 ISO 200
It is a different story in the case of the friendly family of deer that frequent the wildlife meadow and they may be seen daily, but none of them are large bucks. The fawns are showing up more frequently now. Late on Tuesday evening the doe featured in the post of June 16th, brought a fawn to the meadow for the first time this summer. It was too late for photography.

I was back at the meadow at dawn on Wednesday morning and while I saw several deer, that particular doe did not arrive, so I left for a short walk. When I returned she was coming into the meadow with the fawn following close behind. I got a few shots off with the 70-200mm lens, and then decided the 500mmF4 would be my best option as they had walked further into the field.


Even though these deer are not afraid of me, the fawn was full of life as young animals will be, and was continually running about, and jumping. Even though the light was excellent it was hard to catch the young animal at a time that a portion of it was not shaded. No matter it was time to start shooting fast in the hopes of catching a good pose.


I fired once and the fawn jumped to another spot where the lighting was better. This one had great potential! When I pressed the remote release something did not sound normal and I was unable to get the camera to fire again. All of this while the fawn tantalized me by frisking about in the meadow directly in front of me. I actually was not too concerned as if there is any way to resuscitate an ailing camera rather than sending it to a repair facility, I am usually able to find that way. Following the directions on the screen did not work so I had to return home. A quick cruise on the Internet revealed that this was indeed a common problem with the 40D and that the code could mean a lot of things. It is often a communication problem between the lens and camera body or the electronic brain of the camera may be confused and a reset which is accomplished by removing both the main battery and the backup battery will restore the camera to proper function.

This did not work and after extensive testing I found that the mirror was flying up and back when the camera fired, but the shutter did not function! There is either a mechanical failure in the shutter itself or a problem in the electronics that control it, so this means a trip back to Canon . Canon estimates they will have the camera for seven days or more depending on their seasonal workload and if parts are in stock. I found several posts in discussion forums where the cameras were gone for up to three weeks.

Now I have to suffer severe withdrawal symptoms as I do without my daily dose of DSLR use.


A camcorder used in card camera mode is not the answer. They are O.K. for some tasks, but not serious wildlife photography!

But there is hope; one who is so addicted cannot go long without their camera, so of course they should always have a spare. I had initially considered a Digital Rebel in one of its various configurations, but then I found that it takes a different remote release and batteries. If one gets the very latest version, they must purchase different memory cards as well as it uses SD rather than CF cards.

B&H had several refurbished 30-Ds at a reasonable price. Everything is compatible between these cameras, so a 30D should be here by next Wednesday.

Let's hope that it doesn't give the dreaded error 99 code!

Ladino Clover and An Encounter With A Young Rabbit

In the last two months I have posted a lot of material pertaining to the meadow I planted for wildlife. As mentioned before, I plant a strip of grain with Ladino Cover growing in the understory. On the following year this usually results in a good growth of the clover, which is an excellent forage crop for wildlife during the warm months.

The photograph below is a close-up look at a Ladino Clover blossom. 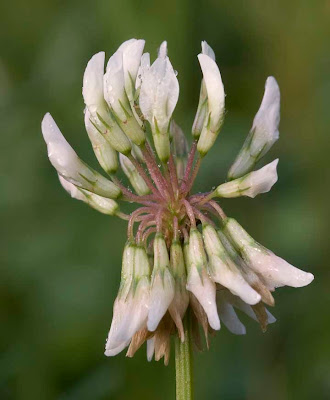 In addition to the whitetail deer, woodchucks, and wild turkeys which we have seen in the meadow, one may occasionally spy a cottontail rabbit. At one time these animals were quite common, but today a sighting is rare in this area. In this instance the rabbit was not actually in the wildlife meadow, but he was nearby. There are a few old hay bales there with clover growing around them and this young rabbit has made this his home. He likely uses the bales as a hiding place from predators such as foxes, hawks, and coyotes.

At one time they were a popular small game animal and may still be in certain parts of the country, but since they are so scarce, few hunt them in our area. 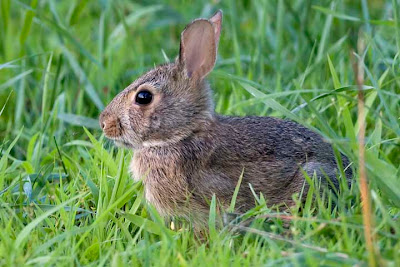