Whitetail Fawn Update
Things have not gone well in my quest to photography the newly arrived fawns in the local whitetail herd and I have not had another opportunity since the encounter described in the post of June 3rd. The most confiding doe has not given birth yet. I have seen several does with large udders and sunken flanks, but they have not brought fawns to the meadow yet and I have not encountered them in the nearby woodlands where they are certainly hiding.


Thoughts On Photographing Calf Elk
I usually receive some inquiries about photographing the calves in the Pennsylvania elk herd. In a nutshell, I have found it to be a difficult task to successfully photograph them. Like whitetails, the young doe not move about a great deal for a few weeks after birth. The mother hides them and returns to nurse them. Whitetail fawns are usually relatively easy to photograph in Shenandoah National Park as there is a large concentration of them around Big Meadows, but the elk are scattered over a wider area. It also seems that the cows are less thrusting of humans at calving time than the does at SNP and are more likely to run to keep the young from human contact. In addition one is not as likely to see them in roadside meadows until somewhat later in the summer. The birthing period is much the same as whitetails, with most being born from late May through mid-June.

I was in the elk range from June 17-20th of 2008 and had very few encounters with calves during that time. I was concentrating on filming as I wished to complete "The Truth About Pennsylvania's Elk Herd" and so did not always get the opportunity to take stills in my best encounters. A favorite strategy is to watch an area of prime elk habitat and eventually a cow is likely to appear and a calf stand up and begin nursing. In the case pictured below, two cows and a yearling were feeding in the area and left. Suddenly one of the cows returned and a calf stood up and approached her, but even though I was at least 150 yards away the cow was aware I was there and ran with the calf following. 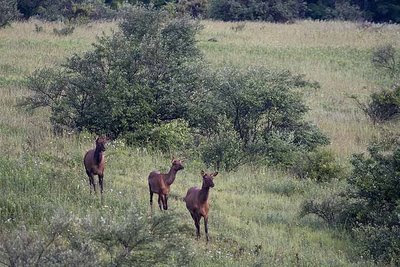 
If one comes upon the animals unexpectedly they are likely to run. You need to have the right lens for the situation and your basic camera settings such as ISO already made. A point to keep in mind is to not harass the animals and spook them by trying to approach too closely, but in some cases it is unavoidable such as when one is hiking a backwoods road and suddenly elk bolt in the woods beside them. 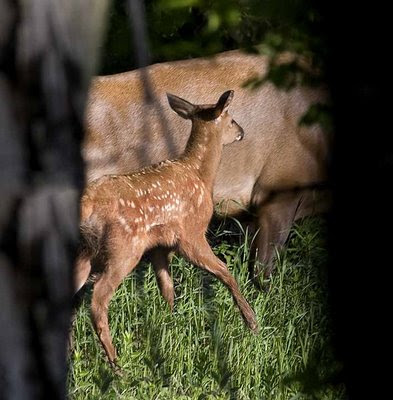 
Perhaps the best encounter was when Ronald "Buckwheat" Saffer and I were walking through a patch of woodlands and a calf suddenly stood up and looked at some adult elk that were feeding some distance away. I captured the best poses on videotape, but did manage to get one good shot with the DSLR. 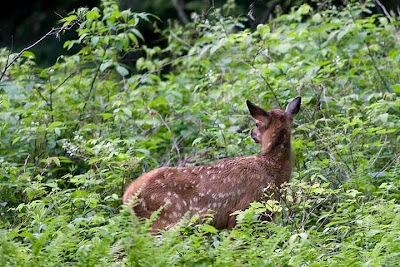 A Hidden Calf Stands Up As It Becomes Aware Of Other Elk Nearby
It seems that one has better luck seeing the calves after they have gotten a bit older and are traveling with the mothers most of the time rather than spending significant periods of time hiding, so I would expect that July, especially from mid-month on, is a better time to see the calves than in June, but the downside is that they are not quite as photogenic as when they are extremely young (It seems there is nothing quite like the wobbly steps and bright eyed innocence of the very young). 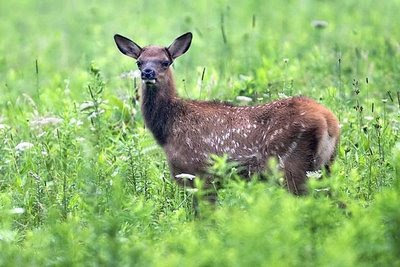 Mid-Late July Is An Excellent Time To Photograph Calves


During late July and August, one is more likely to see the calves grazing in the meadows and periodically nursing from the cows. This is perhaps the best chance of encountering elk when touring by car. The spots fade gradually in August. By September, most have a brown coat and no longer make an exceptional subject especially as attention shifts to the rut and the spectacular sights and sounds of the bulls as they bugle and otherwise engage in rutting activity.

Like all wildlife photography, it is often a hit and miss affair. It can be difficult to see an elk one day, while they may everywhere on the next. One thing is certain, the aspiring photographer must be out and about at first photographic light as the elk quickly leave the meadows, either slightly before or soon after sun-up and they often do not re-appear until very late in the evening. Late morning through afternoon is usually not productive. An added challenge is that many mornings are foggy and the animals are bedded for the day by the time the fog lifts, but if it is not too heavy it can lend a mysterious, wild atmosphere to photographs.

More experienced elk photographers may not agree with the above assessment, but that is the situation as I have observed it in the relatively limited amount of time I have spent in the elk range during summer.

For more Camera Critters photos, click Here!
Posted by Willard at 9:33 AM 18 comments

While I have seen one fawn so far, most of the local whitetail does have either not given birth yet, or are hiding in the woodlands and tall grass. Rainy weather has also made it more difficult to see deer of any type. 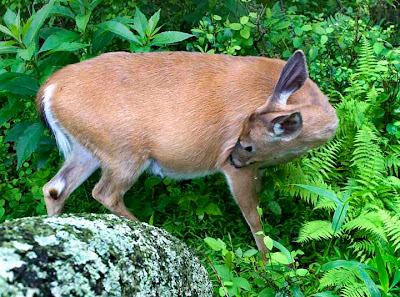 While the does are preparing to give birth, the larger bucks' antlers are growing quite rapidly. The following photographs depict how much one particular buck has increased in size in two weeks. 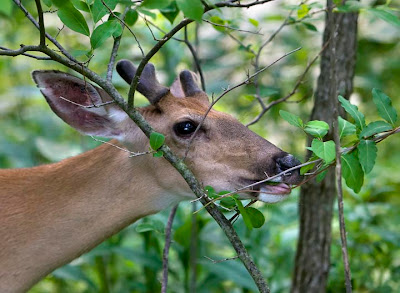 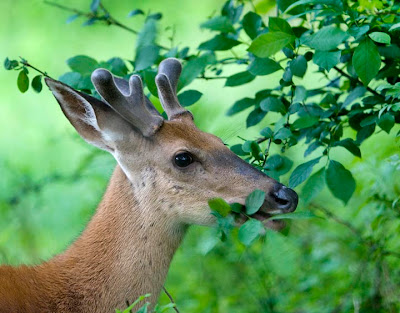 This buck is a two year old and should be quite impressive by the first of July. Antler size is determined by genetics, quality of feed, and the age of the deer. Our area of Pennsylvania is not known for exceptionally large bucks so do not expect to see photographs of huge, exceptional whitetails on this blog. These animals are more typical of what Pennsylvania actually produces, than of those that grace the pages of national hunting magazines. In many cases these deer are pen-raised deer that are bred for maximum genetic potential, and fed with food formulated to produce maximum body and rack mass.

Pennsylvania traditionally managed its' whitetail herds so that maximum hunting pressure was focused on the males resulting in very few living to maturity. The state currently has antler restrictions, which enables many bucks to survive somewhat longer, but few survive the season that they reach the legal threshold. In some areas of the state an animal must have three points on one antler to be legal game, while in other areas, four is the magic number.

Click Here, for more Camera Critters photographs.
Posted by Willard at 10:27 AM 16 comments