A Discussion Of ISO In Digital Photography

ISO setting in regards to film is a rating that expresses the film’s sensitivity to light. Generally speaking a lower ISO such as 100 will give sharper images, more vivid colors, etc. In film days, the roll was rated at a certain speed, which could not be changed between shots.

With a digital camera ISO is a rating of the camera sensor’s sensitivity to light. The beauty of this is that the setting can be changed between shots to meet the photographer’s needs. In many cases the camera will select the speed automatically depending on the lighting conditions. In the earlier models of DSLRS (Digital Single Lens Reflex Cameras) this was not the case. The Canon 10D did not have this feature, but the 40D does. (I still prefer to make the decision myself). If the picture quality were better at the lower settings, why would one choose a higher one that results in diminished quality?

Things are fine as long as lighting conditions are excellent, but when one is photographing action scenes they must have sufficient shutter speeds to deal with the motion. In wildlife photography one often has to contend with both poor lighting conditions and subject movement. This involves compromises such as raising the ISO setting so that a satisfactory shutter speed may be obtained to stop the action.

Using a higher ISO may result in a softer looking picture with digital “noise” being visible. This usually appears as red and blue or green dots in the image with it being worse in shadow areas. DSLRS have made large strides in dealing with the noise through improved image processing in recent years so that it is possible to shoot at higher ISO settings and get more acceptable results than was previously possible. In fact some have said it is feasible to use many DSLRS at ISO 400 or 800 in all instances with little noticeable hit in quality.

One may also use post-processing tools, such as the noise reduction utilities built into Adobe Photoshop, or pug-ins such as Noise Ninja to remove noise, but we’ll try to keep this simple as possible and not go into that subject at this time.

We can address this in practical terms by talking about the photograph posted below.

It was very early this morning when these whitetail bucks came near me and started sparring. I decided to try IS0 500, which gave me a shutter speed of 1/180 at f2.8 with a Canon 70-200mm f2.8 L lens. Basically doubling the ISO rating will enable one to double the shutter speed, and cutting the ISO by one half will decrease the shutter speed by ½. Had I used IS0 200 I would have been at 1/90 or less and at 100 I would have been about 1/45. Even 1/180 is marginal for stopping this type of motion and 1/45 would certainly have resulted in blur unless I caught the animals at a moment of perfect stillness. 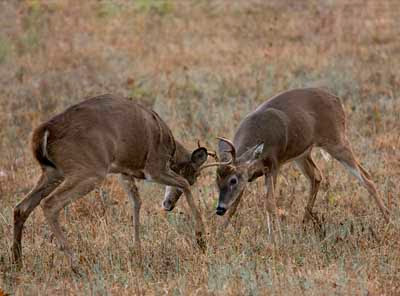 The good news is that if one shoots in decent light and situations that do not cause focus problems, that they do not need to concern themselves with many of these issues. As Wom Tigley pointed out in his response to my previous post he shoots a Canon S1, and uses a few basic settings and takes excellent photographs. By looking at his pictures I could not tell that he was using a point and shoot. “Salty” of Country Captures is another case in point and my Daughter “ASH”. Both have used the Canon S2 extensively with excellent results. Salty had a picture published in The Pennsylvania Game Commission Calendar and it fits right in with the others. No one would guess it was taken with a point and shoot camera. The main downside to these cameras is that ISO 400 is very noisy in poor light because of their small sensor size (the smaller the sensor all things being equal the more noise there will be) and their manual focus is difficult to use. This makes them less than ideal for wildlife photography, but they are an excellent choice for many tasks.

So much for the rant on ISO. I hope that clears things up for Wom, and others interested in the technical matters. If I am wrong or confusing on some of the above points, perhaps some of the knowledgeable DSLR photographers such as Abraham Lincoln, Salty, Chad Oneil, etc. can chime in an clarify things.
Posted by Willard at 9:52 PM 4 comments

Reflections On The "Old Canon 10D"

Almost four years ago on October 14th, I got my Canon EOS 10D from B&H Photo/Video in New York. I really splurged and got a 1-gigabyte memory card, which cost “only" $230.00. Compare that to the price of flash memory today.

The camera is 6.3 mega pixels. It was advertised as being the first digital SLR that was cost effective to own. The theory being that if one shot a significant amount they would recover the cost of the camera and memory card by savings on film processing. I found that digital opened up a new world as one could now afford to shoot a large amount of photographs. I still have a hangup to this day about firing a burst as it still seems that one is being wasteful, but they are not, except that it can be difficult sorting through the images and deciding which to keep.

This was the first digital camera I owned and the only, until I received a Canon 40D today. 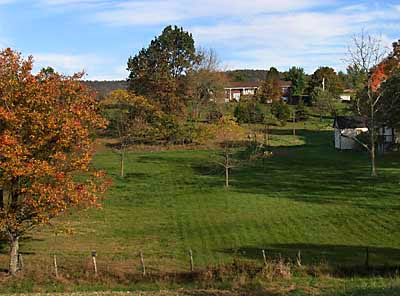 The Very First Shot Back in 2003-A Test Shot Of A Neighbor's House: 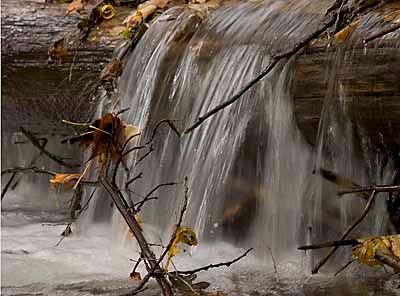 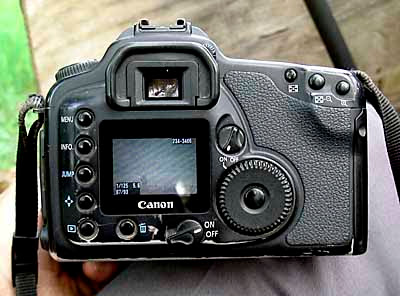 Back View of 10D After 4 Years Of Hard Service

I had a lot of great experiences carrying this camera and will be keeping it as a back up.

I look forward to putting the 40D into service and am hoping for improved performance at higher ISO speeds. The 10D is good, but it does have noise issues in poor light at ISO settings of 400 or more and it is in these conditions that one needs the higher settings. 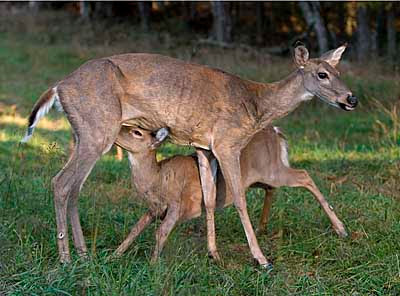 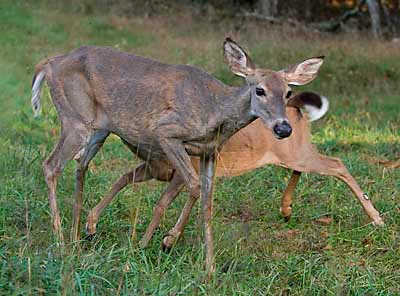 Doe Turns And Walks Away

For a time we leave the subject of Elk and take a close-up look at the Whitetail Deer. I am fortunate in that I am able to observe these animals each day as they go about their lives. I am totally accepted by this extended family group of Whitetails. They know that the man that carries that set of sticks around with the object on top of them is harmless and so they permit me to view them, as few are able to see deer

The young deer, known as fawns, mostly feed on plant growth in autumn, but the does still permit them to nurse occasionally. They usually will not stand still long and turn and walk away from the young animal.
Posted by Willard at 2:53 PM 5 comments

Many if not most mornings are foggy in Elk County. It was so foggy at dawn on September 19th, that there was no visibility on Winslow Hill. There was still fog in the low lying areas, but it was thin enough that one could take video and pictures, so I joined the “road hunting” tourists and found a large herd in the village of Medix Run. The action started in an open field at one end of the village and eventually moved to the lawns of summer homes, and “suburban” residences in the area. This is when the responsible viewer makes certain that their vehicle is parked off of the roadway, but not on private property and that they do not walk through lawns or other private areas while taking photographs.

I concentrated on video and the only stills I got were taken with the Canon XL-H1 video camera in card camera mode. It does reasonably well as a still camera in good lighting conditions, but is somewhat grainy and soft looking in poor light. This was very early and the light was not good. The video turned out quite well, especially when the 6x6 bull horned trees and bushes. 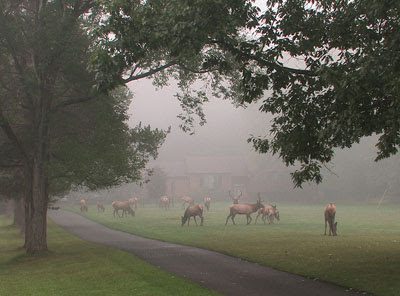 Herd In Lawn At Medix Run 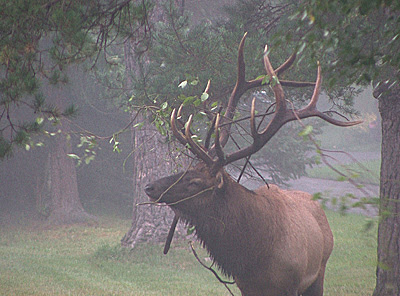 6x6 Bull After Rubbing Antlers In Trees And Bushes 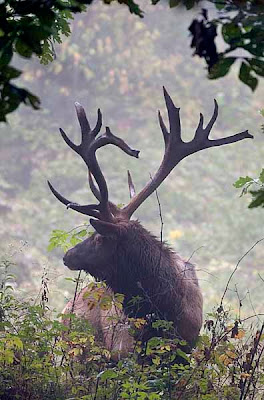 After six years of hunting there are few mature bulls to be seen, but later in the morning I saw several vehicles stopped along the road with photographers in action with still and video cameras. There was a monster bull on the hillside. This time I mounted the 500mmF4 on the tripod and took several exposures with the 10D.

At times I made the same circuit on other foggy mornings, but didn’t have opportunities to match these. Several persons remarked that tourists were seeing more elk in the low lands than on Winslow Hill. This is normal for winter, but not for early autumn and the peak of the rut.
Posted by Willard at 8:40 PM 5 comments