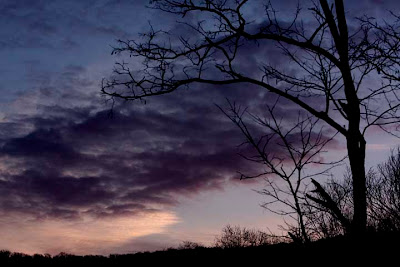 Mornings like this have been all too rare lately. There is snow and sleet in the forecast, and it has already started, so it won't look like this tomorrow morning. Hopefully there will be good photo opportunities for some dramatic winter shots during the storm.
Posted by Willard at 8:48 PM 32 comments

What Is A "Monster" Bull?

The Following are examples of what I consider "Monster" Pennsylvania Bull Elk, with the exception of the last photograph. 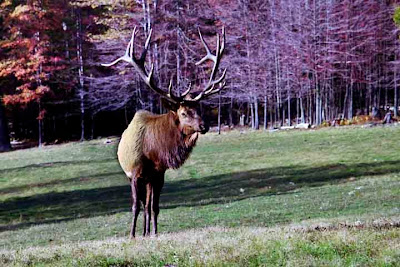 Minolta XE-7: 85-205mm (1998)
As I mentioned previously I am not interested in Boone and Crockett scoring methods. I agree that if one is comparing elk racks on a completely objective basis, then some standard method must be utilized. I have no argument with this concept. From my point however I am not interested in worrying about how a certain type of point or point configuration subtracts points from an overall score, etc., but simply that the animal is an outstanding specimen and impressive to look at and photograph!

I also would like to make clear that defining an elk as a 6x6 or 7x7, etc., does not begin to tell the entire story. Some extremely impressive animals may only have this number of points and may be more pleasing to look at than larger bulls that have many more points. They may also have a much greater antler mass than young or middle aged bulls with the same number of points. 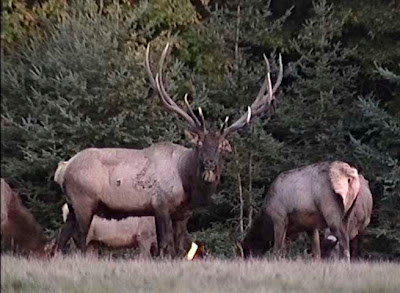 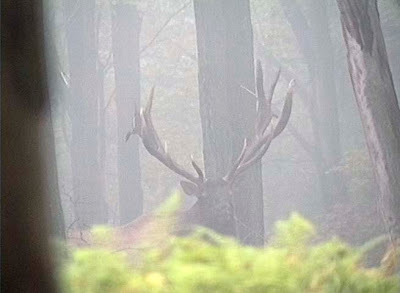 On the other hand, some bulls may never grow a large rack; no matter what age they reach. A prime example of this was the famous character bull “Bad Boy”, which for a time may have been the most frequently seen and photographed bull on Winslow Hill. He was the first bull I videotaped in 1995 and I recorded him during the last rut that he was alive. By that time his rack was markedly smaller and he was showing all of the signs of advanced age. Perhaps in time I will devote a post or so to him, but I do not want to do the research at present. I cannot say what was the maximum number of points he grew with his largest rack, but the photograph posted today shows what was an average rack for this bull. 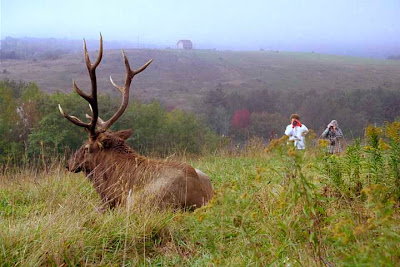 On reflection I realize that the short video clip posted on January 30th, does not tell the whole story of that encounter. I will likely post another portion or portions of that encounter soon. I have been editing this segment in depth in the past week. It is difficult to get an accurate count, but as best as I can tell in a two-day period, about ten bulls were in the area. For those familiar with Elk County this is the block of country between the parking lot below “The Gilbert Viewing Area, The Busy Bee Campground, and “The Saddle” which is now being strip mined and reclaimed as part of the Porcupine Hollow Reclamation Project which is intended to reduce acid mine runoff in The Dent’s Run watershed. The footage was taken in 1997.

Most of these bulls were present during all of the encounters that I recorded and many of them stayed in the area for the entire week. None of those bulls were the largest that the state has produced, but some were a short step from that class. These bulls represented a good cross section of the herd at that time with some up and coming young bulls, several mature bulls in their prime, one famous character bull know as “Screamer” that was just starting to decline, and another know as “Mean Bill” that was in his last year of life with very poor antlers.