Turkey mating season is winding down in our area, and it is almost impossible to hear a bird gobbling, but it seems some of the males are still looking for a good brawl. After several less than ideal mornings, today was cool and clear with patchy fog, a beautiful morning to be afield.

Shortly after dawn a few first year bearded gobblers known as "Jakes" arrived and fed in the meadow some distance away. As the rays of the early morning sun touched the meadow, another small group of Jakes arrived on the scene. Soon the two groups had a tremendous falling out and a violent fight began. It was mostly between two birds, but occasionaly some of the others entered the fray. 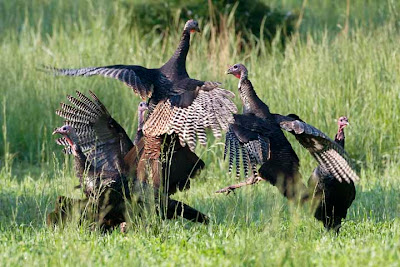 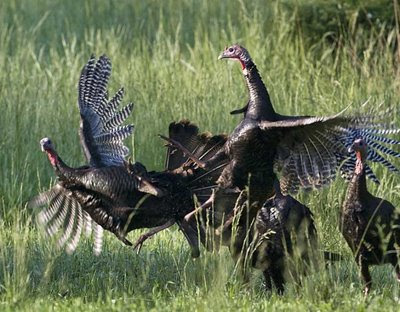 Anything Goes!
It appeared that they would actually ram into each other, leap in the air and kick at their opponent, and sometimes grab him by the neck. 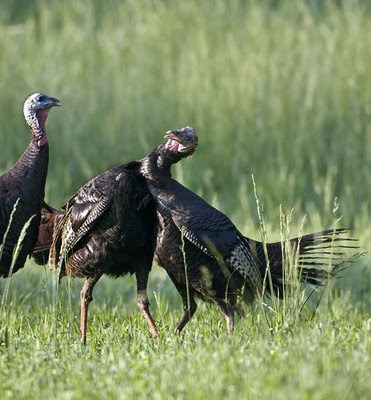 This continued for several minutes. The photo below is somewhat unusual because it is hard to tell what body parts belong to what bird. As best as I can tell the tails sticking out to left and right below to the two combatants, while the center bird walked between the two and his tail is not easily visible, as it is not fanned out. 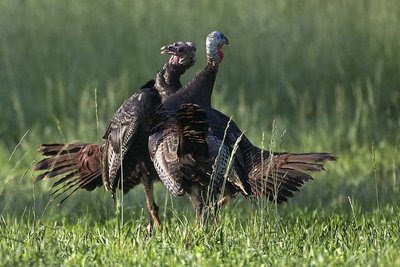 In time the combatants were totally exhausted, laid down in the grass and rested for several minutes. 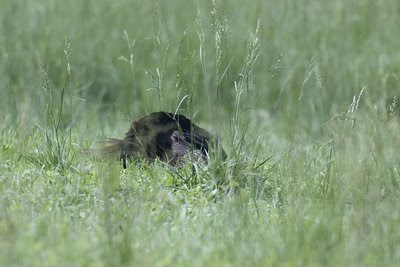 Taking A Break
Eventually they recovered and resumed the battle for several more minutes before vanishing into the nearby woodland.

For more Camera Critters photos, Click Here!
Posted by Willard at 11:39 AM 14 comments

Another Encounter With A Mature Bull

Elk may spend an extended period of time in one area, or they may cover a lot of ground in a short period of time. After I photographed the bull featured in the post of May 16, I returned to the same spot that evening in hopes of finding him feeding in the same area, but no elk were sighted. I found him about a mile away, feeding in a camp lawn. This did not provide good photographic opportunities, but on the following morning after photographing Bull #36 in Benezette, I drove up Winslow Hill and found him feeding in a Pennsylvania Game Commission parking lot. 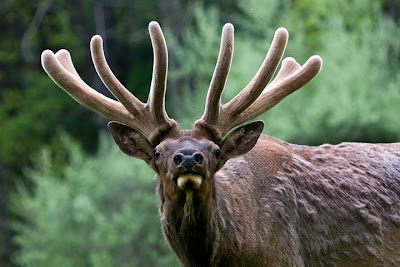 
Elk are primarily grazing animals, but they do like to browse on suitable trees and shrubs. 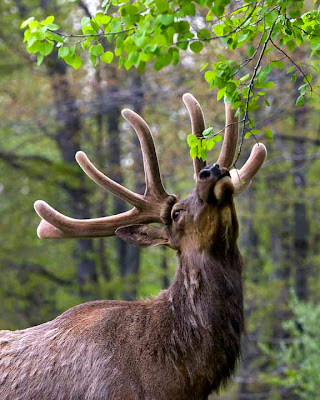 Browsing
As with most animals that are acclimated to humans, it was difficult to capture this animal in photogenic poses as he spent most of his time grazing. At one point two turkeys hunters emerged from the woods and had to walk directly past the bull to return to their vehicle. Needless to say, they did not spook him. In fact their appearance actually improved the situation as he looked at them as they walked from the woods. 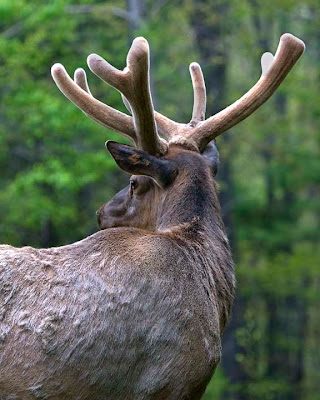 What's Coming?
The older of the two gentlemen apologized for disturbing my photography, and I assured him they had not, but had in fact actually helped, as the animal was completely tame. They departed quickly as they had an important meeting and I returned to photographing the bull while he slowly fed across the grassy parking lot and vanished into the nearby woods.

On of the hunters was Rawland "Rawley Cogan" who was PGC Elk Biologist when the groundwork was laid for the first modern day elk hunt in 2001 and is currently employed by The Rocky Mountain Elk Foundation, which is building a visitor's center on the lower portion of Winslow Hill . A ground breaking ceremony was held in September of 2008. When completed the complex is to feature a network of food plots with interconnecting trails and wildlife viewing blinds that may be used by the public under strict supervision, along with the visitor's center. The complex is to serve as a portal to Pennsylvania's Elk Range and is to be operated by the Rocky Mountain Elk Foundation in co-operation with The Pennsylvania Department Of Conservation and Natural Resources. 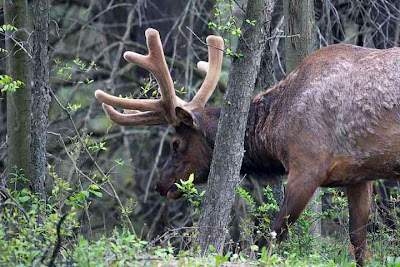 Vanishing Into The Woods


I hope to post more photos from this trip in the near future that deal with reclamation work and habitat management practices as well as showing more elk.
Posted by Willard at 8:38 AM 5 comments