Summer is a great time for all types of outdoor photography. For those who focus on the big game species, Pennsylvania's Elk herd offers some great opportunities. At this time of year most are interested in the calves, which are exquisitely beautiful with their brown spotted coats, and the bulls, which are growing a velvet covered rack. 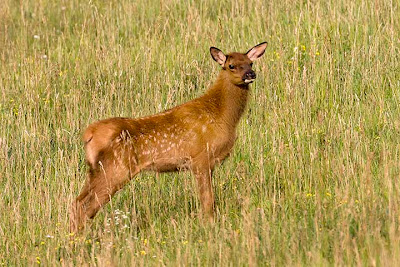 Calf On A Beautiful Summer Morning
I was in the elk range from Monday afternoon until late Friday morning of this week. The weather was less than ideal a considerable amount of the time, but the action was outstanding.

A large herd of cows and calves were roaming Winslow Hill. They were often found at the Gilbert Viewing Area. A foreman on the strip-mine reclamation crew said he had seen as high as fifteen calves in the meadow at once.

My best encounter was on Friday morning, when I ran into a portion of this herd. I was able to get eight calves in the frame at once. Things were very hectic for a bit as I was trying to shoot video, along with stills. On two occasions, the calves began milling about rapidly and calling with a loud mewing sound, while the cows responded with a call of their own. What an exciting time! 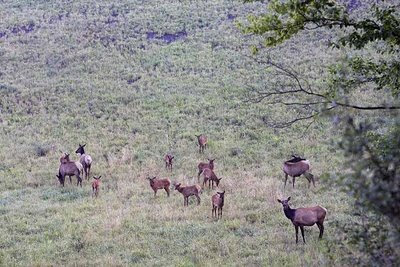 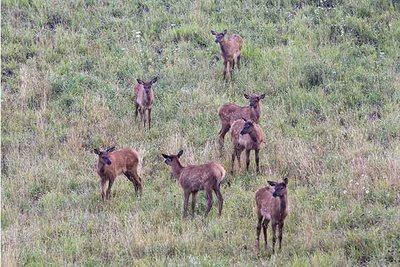 Zoomed In On Seven Calves

Another highlight of the encounter was when a calf nursed from its' mother on a distant ridge. The fog covered mountains in the distant background and the early morning sunlight complemented the subject


This was actually much further than the previous herd shots as they were taken with the 70-200mm, while this was taken with the 500mm and 1.4 extender. Chow Time
The spots are already starting to fade on some of the animals, and by early September they will be gone in most cases.