They're Here!-The First Fawn Is Sighted

The blossoming of the poplar trees coincides with the birthing period of whitetail deer fawns in our area. I thought the other day as I photographed this poplar that I had never heard this as a part of folklore when I was growing up. Some of the old timers had a saying that "it's time to plant corn when the poplar leaves are as big as squirrels ears", so perhaps I can start a new "old time saying" in reference to the fawns, such as "when the poplars bloom all day-the whitetail fawns are on the way" (Just kidding, I know it sounds ignorant) 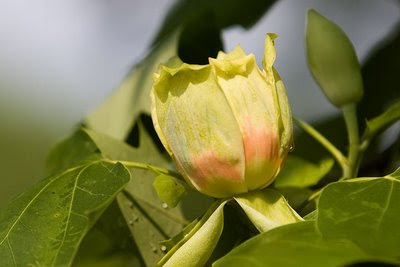 Poplar Blossom
At any rate most of the does have very large abdomens now and their movement patterns have changed. In fact they move about very little and are often seen standing in one spot in the meadows for a long period of time. I take this to mean that they will soon give birth, or perhaps they already have, and the young are lying in the grass nearby. 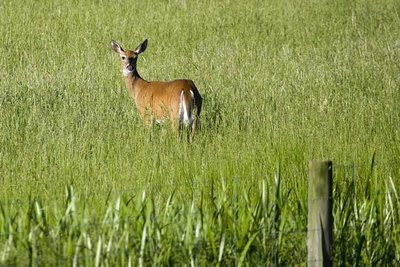 Abdomen is still large so birth has not likely occurred yet

One of the does I see almost every day still had an extremely large abdomen on Monday evening, but last evening her flanks were thin and sunken, so she had given birth. I did not get to see the fawn or fawns, however and this morning I saw very few does in the area I usually frequent, so I went to a different area and drove a narrow pathway that I mowed on Monday. When I reached this area, I saw two adult deer in the extreme distance and they walked slowly into the hay field. Suddenly I saw a small deer coming from the brush and heading toward the hay. I opened the door and got in position with the 30-D and the 100-400mm lens. Surprisingly instead of following the adult deer, the fawn spied me and began running toward the vehicle. 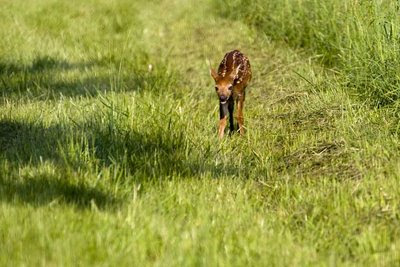 I Have To Check This Out! 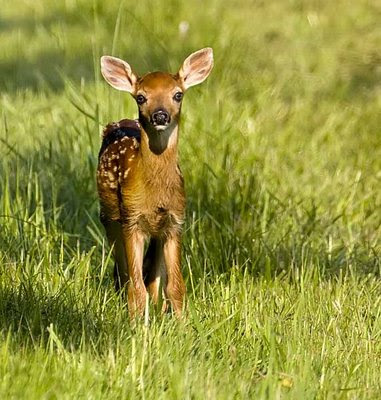 What Is This Strange Creature That Is Pointing Something At Me?
At first it seemed the fawn would run up to the vehicle, but then it stopped some distance away, turned and ran into the hayfield. 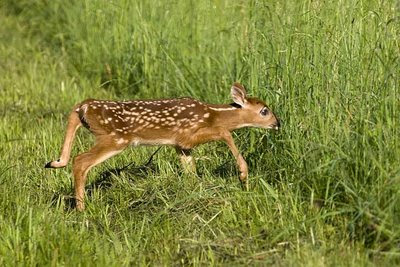 Even though I am a somewhat veteran of photographing Pennsylvania wildlife, and have had many more dramatic encounters with fawns, it was still exciting to photograph the first fawn of the year.