The mating season for whitetail deer, or the rut as it is commonly known, usually kicks into overdrive during the last week in October or the first week in November. There has been little signs of rutting activity here, other than a few desultory sparring matches between small bucks.

A Thursday morning trip to Big Meadows at Shenandoah National Park in Virginia found a far different set of circumstances, with the rut going full bore. 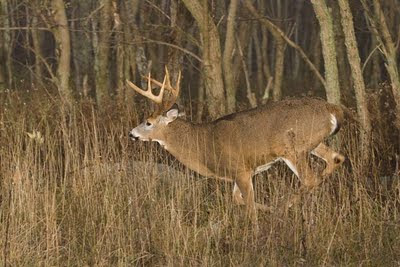 8 Point Buck Chasing Doe
The bucks are actually ready to mate before the does are ready to stand, so this is the time that one often sees a doe running with a buck in hot pursuit. 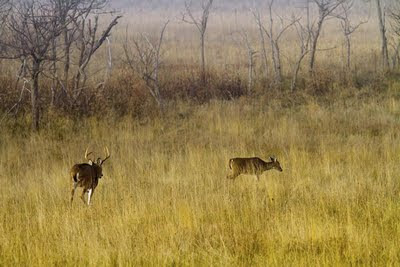 Hot Pursuit
Bucks make lip curls, also known as flehmening, to concentrate the odor of a doe's urine in their nostrils. From this they are able to ascertain whether a doe is in heat, or if they should look elsewhere for a receptive female. 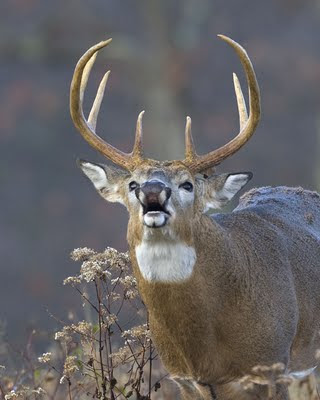 The Lip Curl Or Flemen 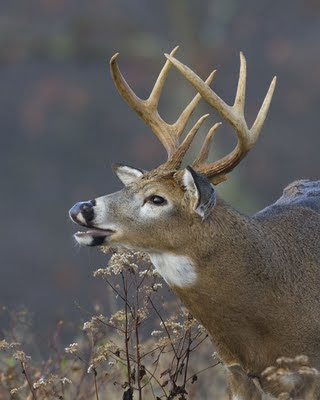 It seems that the rut is triggered by a combination of the time of year and weather conditions, with activity being more intense in cold weather, and slacking off during warm periods. Big Meadows at SNP is located high atop the Blue Ridge and temperatures are usually ten degrees or more colder than in the valley floor, or my home area, which likely explains why the rut is already underway there. It is almost certain that activity will explode here too, after the next northwest cold front passes.

Click Here to view more Camera Critters from around the world! 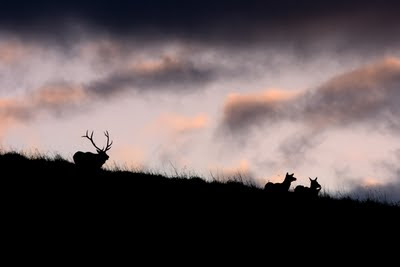 Is The Focus Of Pennsylvania Elk Management Shifting?
The news that The Rocky Mountain Elk Foundation was withdrawing from its' involvement with the visitor's center being built on Winslow Hill was so earth shaking, that other matters of importance concerning the elk herd that were addressed at this time, were not widely reported.

According to my sources (certain RMEF members), who attended meetings held at The Foundation's property on Winslow Hill on September 11th, and 12th, 2009, PGC Executive Director Carl "Roe addressed the attendees on Saturday and announced that the agency is shifting the focus of its' elk management policy from hunting to tourism. He emphasized that the hunt would continue, but that it would not be emphasized to the extent that it has in the past few years. 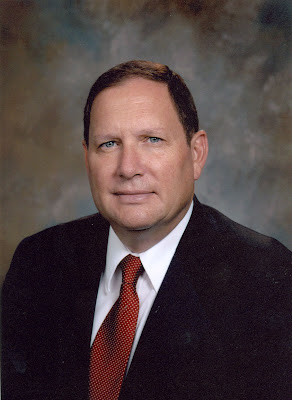 Time will tell the exact ramifications of this statement, but it seems that the first steps had already been taken to address one of the strongest areas of concerns, which is the large number of bull licenses that were issued for the hunt zones adjacent to the major viewing areas. This is a subject that I addressed at length in "The Truth About Pennsylvania's Elk Herd", a 2hr.-42min. documentary. 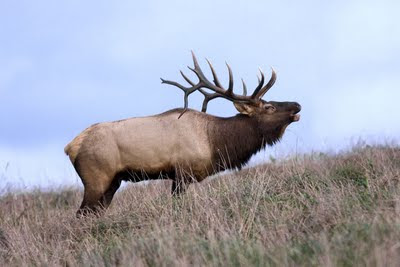 This particular problem was addressed for the fall 2009 elk hunt. The combined Zones were dropped and this year only 2 bulls may be taken in Zone 2, and 2 bulls in Zone 8. There is actually a higher overall license allocation with a total of 59 regular elk license, plus the special conservation tag that was auctioned off by The National Wild Turkey Federation, which makes a grand total of 60. 21 of these are bull tags and 39 are for antlerless elk. This is compared to last years allocation, which was 17 bull tags and 28 antlerless for a total of 45 licenses, which comes to an increase of 4 bull tags and 11 antlerless tags, but if one subtracts the 10 additional tags for the September 2008 hunt, then the total increase in antlerless tags is only one animal.(The tags for the September hunt were drawn in 2007, and as such I do not think were counted in the 2008 allocation, although the hunters were still out there looking for a cow elk in Hunt Zone 1 in September of 2008). Note that the September hunt was discontinued last year.

While the statistics may be somewhat hard to follow, the bottom line is that it appears hunting pressure has to a certain extent, been shifted away from the elk near the viewing areas.
Posted by Willard at 10:41 AM 4 comments

It was basically a given with me that I was going to upgrade my DSLR battery when Canon introduced a camera in the class of the 40D that had the option to record HD video. This happened recently and I pre-ordered one so that hopefully it would ship soon after B&H re-opened from the Holidays. They were out of stock for a short time, but they got a new shipment over the weekend of Oct. 17th, and the camera shipped on Tuesday.

I am somewhat conflicted about getting a new piece of equipment as in many cases, it forces one to address a lot of issues until everything is working properly and one can actually settle down to using the equipment as a new tool for wildlife photography without having to dwell on the nuts and bolts aspect of the situation.

That being said, it was still a great thrill to receive the package from B&H last Thursday, but I restrained myself long enough to take it to my favorite photographic area for the ritual of pressing a new camera into service. 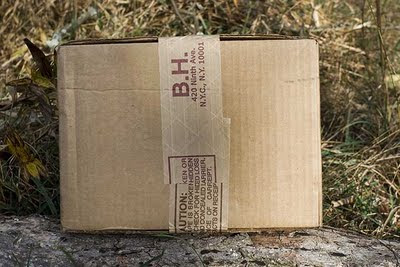 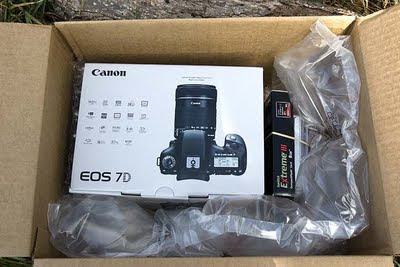 I Can't Wait To Get My Hands On It! 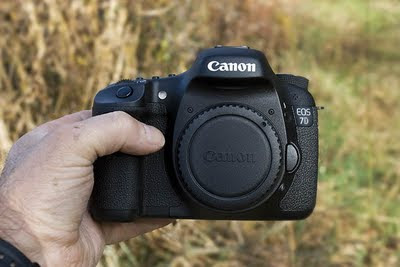 While I do not expect this to replace the XL-H1 as my primary video acquisition camera, I do have hopes that it will enable me to shoot video clips at times I am primarily concentrating on still photography and am not carrying the camcorder. As a result some of my first tests of the camera were mounting it on a video tripod and shooting a few video clips. 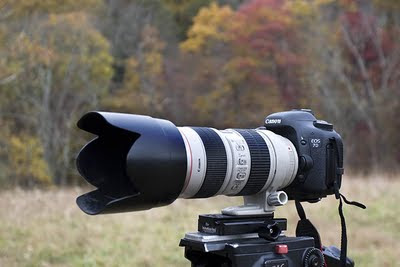 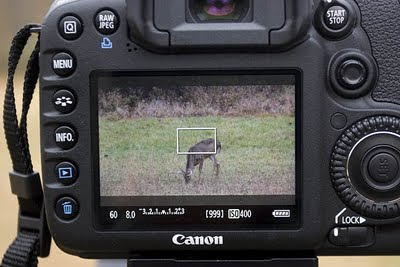 7D In Video Mode
It actually works reasonably well as a camcorder and I hope to post some clips, or a short film soon, but for today we will settle for a still image taken with it and the 300mm F4 Canon L. On the plus side, while this camera does feel slightly larger than the 40D, it has a "better" feel in the hand (I know that is entirely subjective-some may prefer the 40D). The viewfinder is brighter and overall more pleasing to look through, while the LCD is much sharper enabling one to evaluate the quality of a photograph much more readily. The camera is 18 mp, vs the 10.5 mp of the 40D.

I previously hinted at a downside and there always is one-at least from a financial standpoint. In this case there where three problems, some of which have easy work arounds. I shoot in Raw and there is no upgrade to CS3 to handle the 7D files. There is a method to convert them to DNG by the free DNG converter, but this creates an extra step and raises some concerns, so suffice it to say I did upgrade to CS4, which was another $200.oo.

The video editing program cannot handle the video files without converting them to an intermediate codec, so I had to upgrade this aspect of my editing software, which was actually quite reasonable at $70.00.

This is not the major problem, however. My Photoshop computer is an old Dell 2400 with Windows XP, which can only handle 1 GD of RAM. This worked very well with CS2 and The Canon 10D files, which were only 6.3 mp. Things really slowed down when I went to the 40D, but the system was still usable. I installed a trial version of CS4 soon after it came out and found that it slowed things down even further, so I did not purchase it.

The bottom line is that I need a much more powerful desktop. As a short term solution, I installed the CS4 on my Toshiba laptop, which has the Vista 64 Bit operating system, 4GB of memory and a 2.3 GHz AMD Turion Dual Core Processor. This system handles the 7D files and CS4 quite well, but I really don't like using a laptop for my serious photo editing.

Look for more photos and some video clips, hopefully in the near future as I explore the features of the 7D under field conditions. At this point in time, I am very impressed.
Posted by Willard at 11:07 AM 12 comments