It has not been a good week for posting, or visiting blogs. I had two video projects to complete and one of my best friends was in the final stages of an extended battle with cancer. He passed away late Wednesday night and services are scheduled for tomorrow. I spent most of Wednesday afternoon with him and it was a difficult time.

Also this may be the last post for some time as it is almost time to go to the elk range for a two-week trip to videotape and photograph the rut. Benezette store is currently out of stock on the elk video, but they should have a new supply by Monday.

The Whitetail Bucks-Shedding Velvet
In most cases the shedding of the velvet is completed in a day or so, but this buck is an unusual case. He is the deer that had the vines tangled in his antlers in the previous post. On that day he was aggressive and rubbed his antlers against anything he could find to dislodge the velvet, but then he stopped doing that and surprisingly much of the velvet is still on the antlers as of this morning. 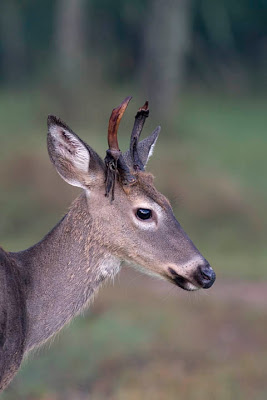 On the other hand the first buck pictured in the last post which has small drops of blood showing, completed the process in one day. When I next saw him, his antlers were completely bare and he was showing signs of aggression toward the other bucks. 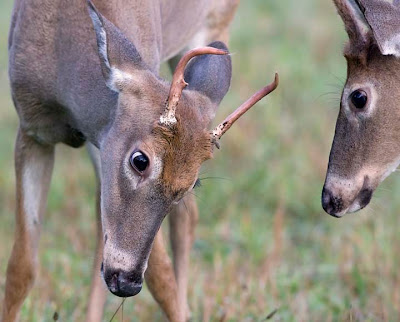 He is too small to be a serious contender in fights, but he should do quite a bit of sparring with other bucks of his size class in the weeks to come, unless he is killed by a poacher or by a junior hunter in the upcoming archery season.
Posted by Willard at 10:11 PM 17 comments