During our recent trip to Yellowstone, be were driving through The Lamar Valley from Cooke City, looking for any wildlife that could be found. We noticed an antelope walking toward the road. There was no shoulder beside the roadway at that point, so I got out of the van with my 40D and 100-400mm lens, with the plan that they would return for me when the action was over.

This was one of those situations that everything worked out for the best. I forgot to get my tripod from the vehicle and I couldn't hold the camera still enough from offhand, so I dropped to a sitting position and rested the camera over my knees (an old rifleman's trick retained from the days long ago when I was a decent long range rifleman). 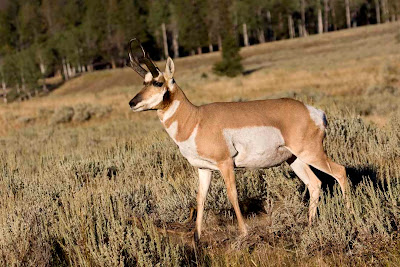 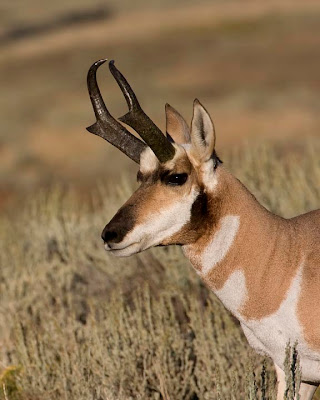 The antelope kept coming closer and eventually crossed the roadway a short distance from me. 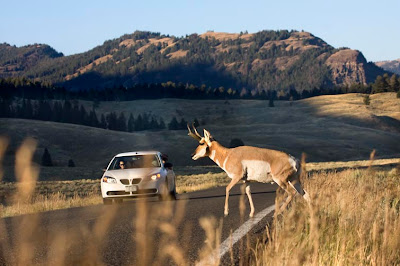 Fawns feed on the mother's milk at birth and continue to do so throughout the summer, but as the animal grows older, plants provide a progressively larger proportion of their diet. The does stand patiently for lengthy periods in early summer, but their tolerance for nursing grows less as the summer progresses. By September they only allow the fawns to feed for short periods, before they take decisive, evasive action.

While fawns usually nurse from their mothers, it is common for them to attempt to feed from another doe. This happens more often when the mothers are reluctant to feed the fawns. In such cases, I have seen as many as four fawns attack one doe. "Attack" is an apt description in many cases as the fawns run rapidly to the doe, slam into her, and feed aggressively-often butting their heads violently against the does' udder.

This series was especially amusing as the doe in question is 1 1/2 years old, has never had fawns, and therefore has no milk.

I saw the fawns running for the doe and pressed the shutter release on burst mode as they piled into her. Here are the three best captures, which show what evasive action a doe may take. 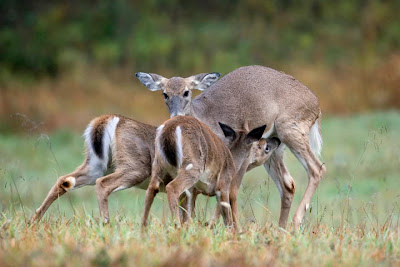 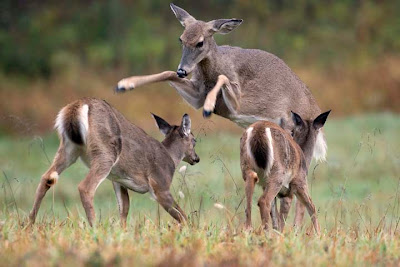 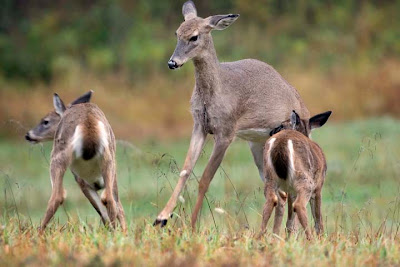 The fawns then went looking for a more receptive doe. I have watched deer for years, but never cease to be amazed by many of the things that they do.