The first week of Pennsylvania Deer season is rapidly drawing to a close, and it has been an eventful week. It seems likely that one of the whitetail bucks which has frequently graced these pages was killed on Monday afternoon, when he strayed across the boundary of posted ground and onto the property of a hunting club. 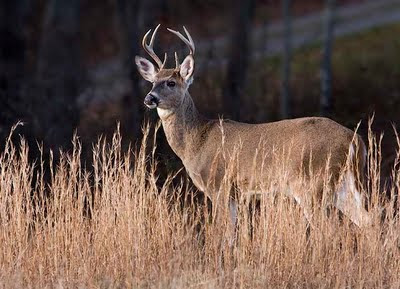 I was watching for roadhunters, when I heard a tremendous muzzle blast nearby. An investigation revealed that the shot was on the neighboring property. I saw hunters driving from the area and found blood by the side of the road where a deer was loaded. I later found where the entrails were removed. The testicles were lying there also proving that it was a buck. This animal was seen both in the morning and afternoon and was within 100 yards of the area of the shot when last seen. He has not been seen since, so it is 99.9% certain that he was the deer that was taken.

While this was likely legal hunting activity, much illegal activity does take place. Since this area has a large deer population and the ground is posted, it is a favorite spot for roadhunting. Road hunting is illegal under the Pennsylvania Game and Wildlife Code. Hunters must alight from the vehicle and get more than 25 yards from the roadway before firing at game. It is also a violation if they use the vehicle to locate the game in the first place.

It was raining on Wednesday afternoon, when a vehicle arrived in the area and stopped to observe a herd of deer in the nearby field. 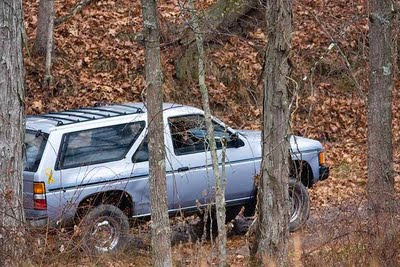 Two persons are involved in this particular incident. A close look reveals that one is pointing a rifle out the window of the vehicle at the deer. 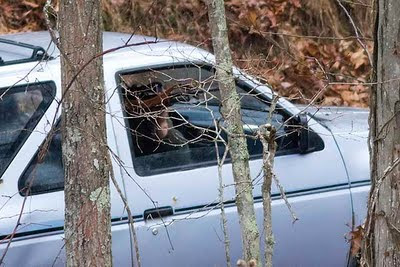 Hunter Pointing Rifle At Deer
This is not a violation if the rifle is not loaded and they do not fire at the deer , but it does create a very bad public image. It is possible they were only looking to see if any of the animals were bucks, but binoculars are the correct tool to use in that case. Many will not risk arrest to shoot a doe, but will take the chance to get a nice buck. Did they intend to shoot? I do not know, but
I was not taking any chances so I commanded them not to shoot and to get the rifle back in the window. They quickly left the area. Young Whitetail Surveys The Countryside, Searching For Danger
During my past law enforcement career I charged well over twenty individuals for committing this violation in this same small area.