It was a warm, overcast evening and deer were grazing peacefully in the meadow. I was sitting in my vehicle, reading a novel, with the camcorder and the DSLR with 70-200mm lens mounted on their respective tripods, ready for action at a moments notice. I thought about mounting the 500mmF4 on the tripod, instead of the 70-200mm, but did decided that it was hot and too late in the evening for top-notch still photos anyway,so I did not change lenses. I was soon to regret this decision.

Suddenly the deer came to attention, looking toward the nearby woodland with their tails lifted in the air and began snorting. There was little likelihood that it was a human that had their attention, so it almost certainly had to be a predator of some time. I stealthily got out of the vehicle and started for the camcorder, when suddenly a black bear came into view.

I have filmed bears successfully in Cades Cove (Great Smoky Mountains National Park) and Shenandoah National Park, but I have no good video of Pennsylvania black bears except for ones that were being processed after trapping and transfer by the Pennsylvania Game Commission.

Here was a golden opportunity. I did successfully film a segment, but then I had to try for some stills to post on the blog. Leaving the camcorder running unattended I crept back to the vehicle for the 500mm and surprisingly was able to get the it into action without alarming the bear, but by that time he was behind the tree eating. Soon it came around the tree and stood up to grab an apple from the overhanging branches. 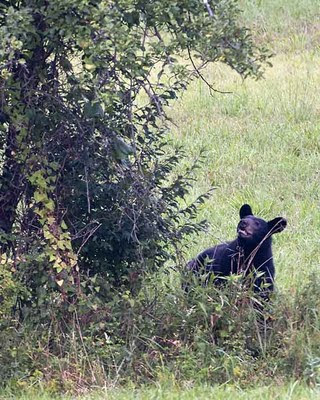 The light was poor and it would have been nice to have been closer, but at least I finally succeded in photographing a Pennsylvania bear with a DSLR. 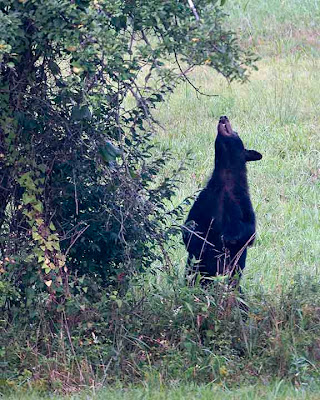 After eating the apple it turned and walked slowly to the nearby woodlands. 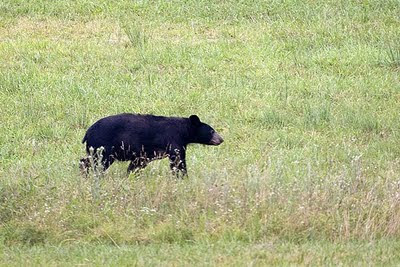 I have spent countless hours watching this meadow and it has rewarded me with a lot of exciting wildlife encounters over the years, but I will always view it in a different perspective after this evening, as I will always think of the time the bear came to visit.