The mating season for elk, more commonly known as the rut, begins in early September, in Pennsylvania. By the middle of the month activity is intense although it may be less on warm days. I find the last two weeks of the month to be the most productive for sighting bulls in pursuit of cows.

This year was extremely good. Although there were not as many outstanding bulls as there were in the years before the elk hunt began, there were a lot of good second tier bulls. The one featured here today is possibly the most promising young bull on Winslow Hill today. This is the bull that was featured in earlier posts, which spent the summer Benezette. This bull has no fear of humans as is amply demonstrated in the photograph below. He left town to pursue cows once the rut began and will likely return once it is over.

If you look closely to the left of the bull you will notice a photographer with a long lens and tripod. The animal was fully aware of his presence and completely unconcerned. 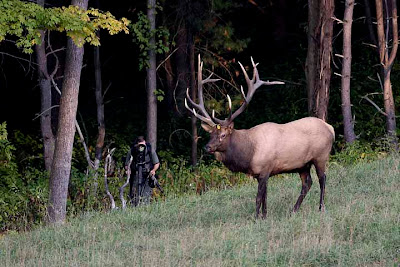 No Fear!
If this animal remains in the No Hunt Zone during the coming elk season, he has an excellent chance of becoming one of Pennsylvania's great bulls. If he strays from it, his career will be short indeed. Many speculate that his father is Bull 36 also known as Fred as his rack bears a great resemblance to the one that Fred had when at a similar age.

If he is taken, it will be interesting to see how someone will be able to justify it as a challenging, fair chase hunt. 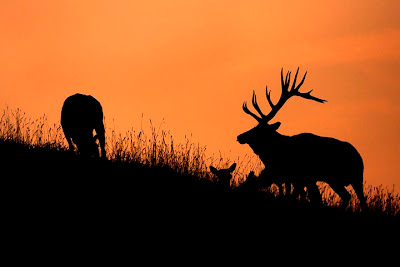 Stay tuned for more posts about the recent trip to Yellowstone and The Pennsylvania Elk Rut.