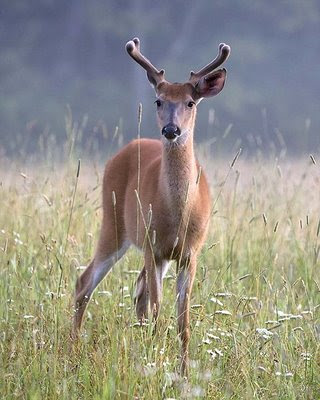 Morning At The Meadow
There is nothing quite like an early summer morning at a backcountry meadow, with the song of birds filling the air. This provides a perfect backdrop against which to observe and photograph the whitetail deer.

The fawns are moving about more now and are seen more frequently, but are still not traveling with the does full time. 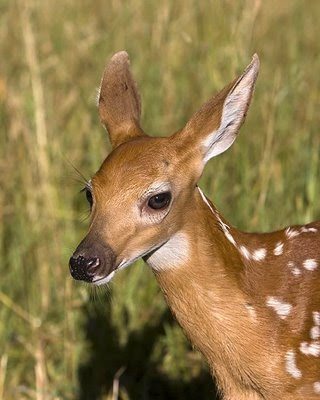 The buck's antlers are growing rapidly and will reach their full potential soon. Later the tips will be more pointed, the antlers will harden, and the velvet will crack and fall off.

The following photos are of the same buck and show how much larger he grew in a period of slightly over a week. 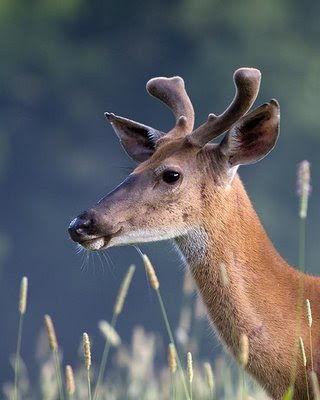 Notice the seventh point beginning to show at the tip of the right antler (It is just a small bump at the top of the wide part of the antler). 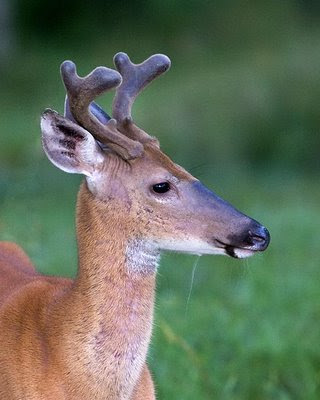 For more Camera Critters photos click Here!
Posted by Willard at 9:38 AM 26 comments 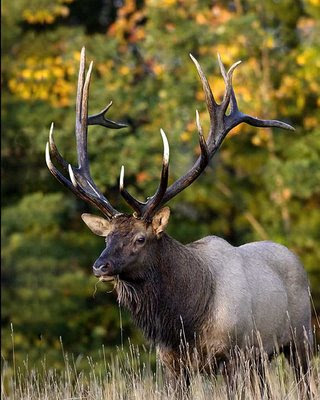 On July 7th, I received a comment from Jim B , which is as follows:

"I enjoy looking at your photos and my wife and I enjoy visiting Benezette and photographing the elk. I have been a hunter for over 45 years (and I am deeply involved in the firearms industry), but what PA calls an Elk Hunting Season is anything but a hunting season. The elk in PA regardless of where you see them are acclimated to humans and have not developed a healthy fear of humans as the deer have.

I think your film did some good and we need to do more to convince the Game Commission that other means of population control is needed versus leading the public to believe that the elk season provides "elk hunting". I at least wish that the TV stations would avoid filming the "hunts" that certainly would cause those that do not hunt to just have more examples to share on why they do not believe in hunting."

I appreciate Jim's comment and wish to elaborate a bit.

I find that most of the people I personally know, that do object to the elk hunt as it is currently implemented, seem to agree with much or all of what Jim has to say. Many also come from a hunting background and most still hunt.

A prime example is a retired biologist and college professor who hunted Elk in Colorado, but opposes the Pennsylvania Hunt. He told me it was far different to hunt elk in a state with a large herd (247,090 after the 2005 season according to "Rocky Mountain Game and Fish"), than in one with a herd numbering considerably less than 1,000 animals. (an estimated 700-750 animals in October of 2007, according to a report on the PA. Game Commission Website). He felt the hunt was likely to damage the genetic makeup of the herd as there was extreme danger of removing too many of the biggest and best animals from such a small herd.

He related this to me as we stood on an Elk County hillside, with several bulls ranging about pursuing a cow in heat. This was after a few years of elk hunting. He pointed out that at a casual glance this seemed like a great situation, but if one looked closely, second tier bulls and not the prime animals of a few years before, were doing much of the breeding activity, as too many of the mature animals had been removed by the hunting season.

Jim B. touches on an interesting point concerning the videotaping of hunts. Those who do so should should look closely at the resulting footage, not just from the standpoint of a hunter, but they should ask, "does this portray a negative image to those not involved in the sport"? It is quite common for the participants to look only at the successful aspect of the hunt and miss seeing things that the more critical observer will take exception to. More importantly they should review the situation with a critical eye and make every effort to insure that any negative aspect does not occur again on future hunts.

One episode comes to mind in which a hunter fires several shots at a bull from what appears to be moderate range. Some shots miss and some hit. The bull runs some distance and collapses. After quite a bit of talking, and congratulatory backslapping, the hunter reloads his rifle and they approach the fallen elk. As they approach the dead bull, the camera cuts to a smaller bull standing in the area where the first animal fell and the hunter thinks that the bull he shot got back up. Luckily the guide knows it is a different animal and the hunter does not shoot. The animal stands there for quite some time while the hunting party approaches before running away.

I have heard comments from numerous persons who have seen this episode. We must bear in mind that it is possible that events were re-arranged somewhat in editing, or re-staged for the camera after the situation was resolved, but if the story is taken as presented, some come away with a less than positive view of the situation.

The most common reactions include the following points.

1. Would the hunter have shot the second elk by accident if an experienced guide had not been present?

2. Why was so much time spent before the party approached the fallen animal?

3. The behavior of the second elk is not exactly that of a wary animal and does not support the view that "Pennsylvania elk are as wild as any"!


I welcome comments from all points of view about our elk herd and elk hunting, as long as the discussion is respectful!
Posted by Willard at 9:57 AM 11 comments