Pennsylvania Elk: The Calves Are Born

Most Pennsylvania elk calves are born from mid-May through mid-June, so I spent Tuesday through Friday of this week on Winslow Hill and surrounding areas photographing and recording calves.

I met Ronald "Buckwheat" Saffer there, and we photographed the elk extensively and reviewed a semi-finished draft of a portion of the elk video. He and Billie Cromwell are assisting as script consultants, and contributing video footage and still photos to the production. 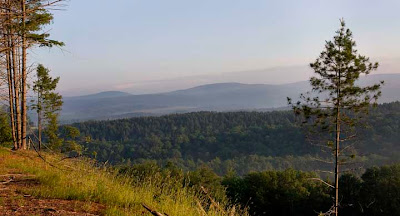 View from Winslow Hill toward St. Mary's-Canon 40D: 17-40mm at 29mm 1/90 f8 ISO 100
I focused on filming, as I do not have a great deal of video of the young animals. I did see several, but most were at long range and the encounters were usually very fleeting, as the animals were very spooky. This is normal to a certain extent as the cows are very protective of the young and will avoid humans more than at other times of year.

I also heard from reliable sources that the Game Commission was capturing calves and fitting them with ear tags, and breakaway collars. This was likely responsible for the extreme skittishness.


I did get a modest amount of video footage at long range with the big telephotos, but finally on Thursday evening, Buckwheat and I had a close encounter with a calf in a wooded area. It initially crouched down at our approach, but soon stood erect. I videotaped this segment and then tried some still shots with the 300mmF4. A small bull was in the woods to the left of the calf. He made a sudden movement and the calf bolted so I didn't get a shot of him facing me. 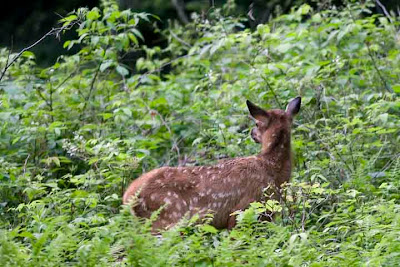 Young Calf Elk-Canon 40D: 300mmF4-1/180 f4 ISO 800
Two bulls were grazing and browsing by the roadside at the entrance to the Dent's Run Viewing Area on Friday morning and I couldn't resist taking this photograph as it looked like the bull was reading the sign. 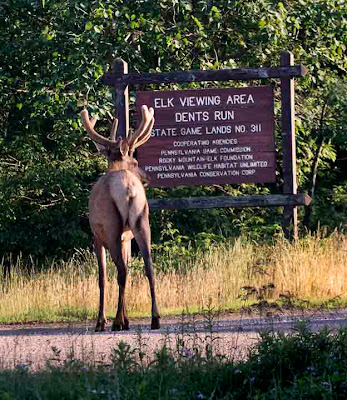 I hope to post more photographs from this trip in addition to more fawn photographs.

I wish to thank everyone for their comments on the last fawn post and I will try to visit your blogs over the next few days!

Slowly but surely, encounters with the newborn fawns are increasing. Shown immediately below is the doe, which was featured in the post of June 5th, when she was obviously very pregnant. She vanished on June 10th and I didn't see her again until the 14th when she came to the meadow with sunken flanks. As of yet I have not seen her fawn or fawns. 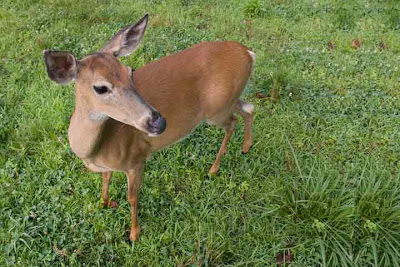 Canon 40-D: 17-40mm at 17mm-1/90 sec. f8 400 ISO
I finally saw another fawn on Sunday morning. No fawns followed the does to the meadow so eventually I left and took a short walk. When I returned a doe was walking from the meadow to the nearby woods. She was passing through an area with areas of tall grass interspersed with mowed strips. A small fawn was with her. I have suspected for the last week or so that this doe had a fawn nearby as her flanks were shrunken and she spent a lot of time in the brush near the meadow, emerging to feed for a few moments and then slipping back into the woods. Luckily she went on into the woods but the fawn walked into the tall grass and lay down, giving me a decent photo opportunity. I had no sooner than arrived at the meadow when the doe and fawn featured in the post of June 9th (the first one I saw this year) came running into the meadow, stopped quite near me and began nursing. I wish you could have heard the soft, rapid, mewing noise that the fawn made as it fed. (This was definitely the same doe, but if she had twins I can't say if this was the same fawn-only time will tell! 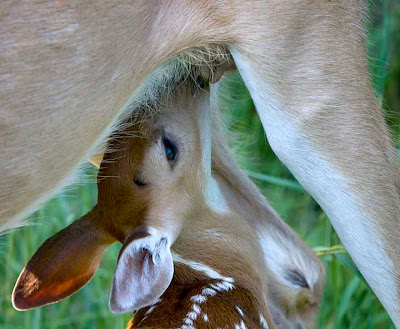 Due to a busy schedule, this will be the last post until Friday or Saturday when I hope to be able to return with further updates!
Posted by Willard at 3:30 PM 15 comments