It was Friday morning, July 24th and I wanted to be headed home as soon as possible, but as so often happens I ran into some of the best photo opportunities of the trip. As you saw in a previous post, I found a large herd of cows and calves quite close to the road. The calves were mewing and the cows were calling to them. I am not certain if this calf was mewing or yawning. I use the term "mewing", because it sounds much the same as the sound a cat makes. 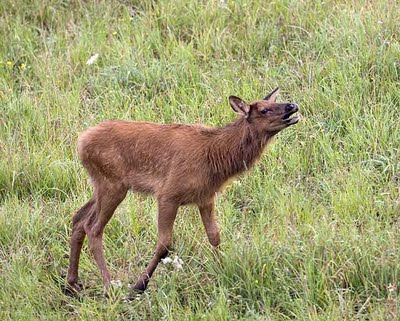 
I had actually loaded the camera equipment in the vehicle and was leaving, when I drove past another portion of the meadow and saw another segment of the herd in bright sunlight so I got out again and captured this nursing scene. 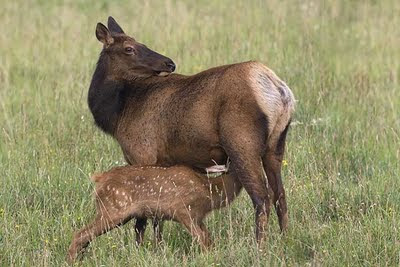 
Both photos were taken with the 500mmF4. I would have preferred a slightly shorter focal length in the last shot, but I had gone into action quickly and carried no other lenses with me.

I hope to visit as many of your blogs as possible, but I am having major problems with my primary Internet browsing computer, which should make for an interesting post in itself in the near future. At least the computers that I do most of my photo work and video production are working O.K.

Along with filming and photographing calves, another primary objective of last weeks trip to Pennsylvania's Elk Range, was to record bulls in velvet.

Tuesday morning was foggy and partially overcast. I encountered a bachelor group of two bulls soon after dawn. Both mature whitetail bucks and bull elk spend most of the year traveling with other males. A notable exception is that yearling bulls and bucks will still be with their original family group in most cases. One may see large bulls and bucks in the same meadow, etc. with the family groups, but in most cases if one observes closely, they will find that they are in fact traveling separately and there is little interaction between the groups. But as we will find out in a future post, there are no hard and fast rules in nature and there are exceptions to every case.

This is an up and coming young Pennsylvania bull, which shows the potential to become one of the state's great bulls if he survives to maturity. 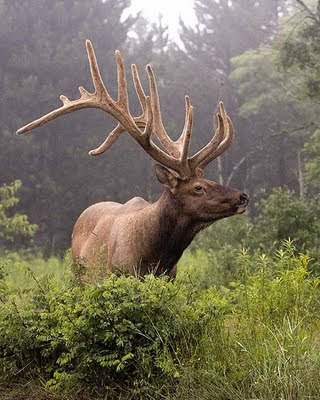 7x8 Bull
These bulls are "acclimated" to humans. Many use the word "habituated", but that seems to have a negative connotation, so I prefer the previous term. A primary problem in taking portraits of these animals is capturing them in an alert position as they are mostly feeding or walking from one food source to another. These bulls are usually found in downtown Benezette, but in this case I was lucky enough to find them in natural habitat. 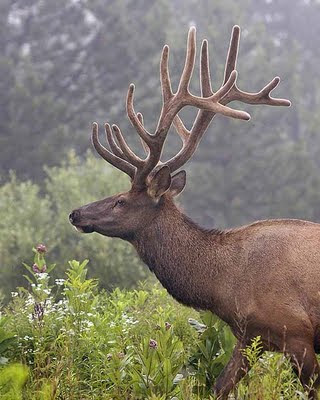 The Other Half Of The Bachelor Group:
7x7 Traveling Between Food Sources 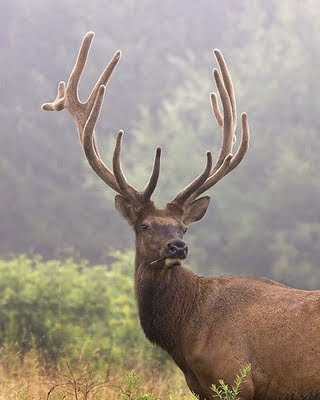 7x7 Still A Young Bull
The photograph below gives one an opportunity to study the point configuration on the larger animal in detail. This is a major tool in identifying an individual animal. Note the long and sweeping end of the left main beam and the configuration of the points on the rear portion of the right beam. While the number of points has varied, this bull has had the same basic shape to his antlers since 2007 when I first became aware of him. (He was a 6x6 then) 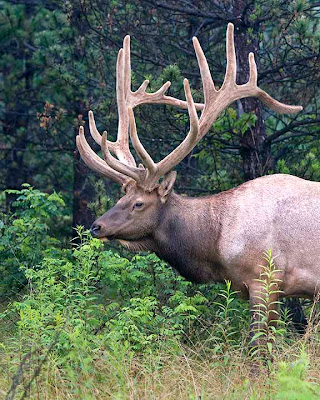 
It is possible if not likely that an animal's antler shape will change to a certain extent if not a great deal over the course of his life, but usually close observation enables one to pick out certain characteristics that do endure from year to year. Combining that along with the animals behavior and other physical characteristics, often enables one to make a positive identification and follow its' progress throughout their lifetime.
Posted by Willard at 12:08 PM 10 comments