A common complaint by opponents of Pennsylvania’s elk program is that elk are a non-native species and thus should not have been reintroduced into the state. This is usually followed by a complaint that they utilize resources that would be better expended on managing public lands for more whitetail deer. Many feel that the elk directly compete with the deer for food and their presence results in less deer.

These folks overlook a few facts in arriving at these conclusions.

Historically there was little regulation of hunting in Pennsylvania, and most importantly there was no agency charged with the management and protection of wildlife! Whatever laws that did exist, had little possibility of being enforced.. This eventually resulted in the decimation of many wildlife species. In time it became obvious that something must be done or much of our wildlife heritage would be lost forever.

It is generally accepted that elk were completely extirpated from the state, although it is possible but not likely that a very few animals did survive in the more remote regions.

Whitetail deer were not extirpated but their numbers were extremely low.

The Pennsylvania Game Commission was founded in 1895 to address this situation. Of course the agency dealt with numerous species, but we will restrict the discussion to deer and elk.

There seemed to be little hope for a speedy recovery of deer numbers by protecting only the remaining native deer, so the agency stocked deer for several years. The first animals were from Michigan while others were obtained from a variety of eastern states, many of them farm raised deer.

Elk were re-introduced by stocking animals from Yellowstone National Park, so we actually have western elk in Pennsylvania, but are these in fact non-native animals or some would say an invasive species? I think not!

In my humble opinion, to remain logically consistent they must either concede that both elk and whitetail deer are native to the state, but were eliminated or nearly so by improper management.

Most if not all of the elk are western elk and most of the deer are descended from animals that were from states other than Pennsylvania, therefore if deer are “native” animals and have a right to be here, then so does the elk! 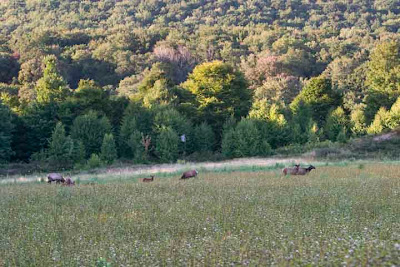 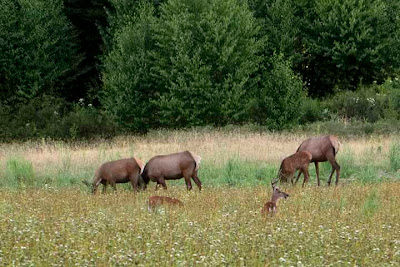 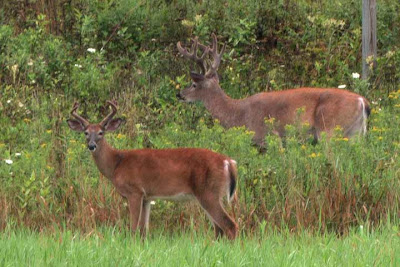 Do they actually compete for food resources?

The accepted view is that deer are primarily browsing animals, while elk mostly feed by pasturing. Personally I have seen both animals engaged in both types of feeding, but it doesn’t seem likely that the elk significantly impact deer numbers as complaints about low deer numbers in the northcentral region of the state are not confined to the elk range. Unless a crop is destroyed by severe drought, I have not seen elk eliminate all the forage in a meadow, but I have seen food plots with lush forage that are not being utilized by significant numbers of deer. A shortage of deer must be blamed on other factors than the presence of elk! In fact the elk habitat management program has the side effect of producing better habitat for whitetails also!

I think we should be pleased that this magnificent animal is once again roaming the mountains and meadows of Pennsylvania!

Coltsfoot--One Of The First Flowers Of Spring

Coltsfoot is one of the earliest spring flowers to bloom in Fulton County. It bears a remarkable resemblance to dandelions, but it blooms much earlier than they do, I saw the first one around the middle of last week and finally took time out on Saturday afternoon to photograph them.

This flower is most often seen along roadsides and other disturbed areas where moisture is present. All of the below photographs were taken by the roadside. 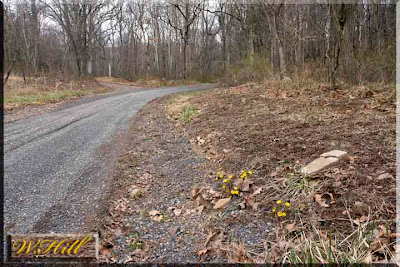 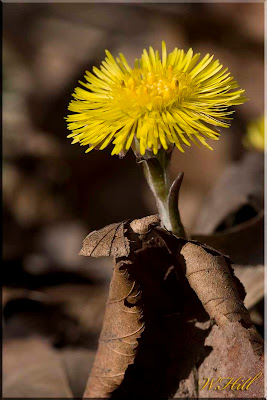 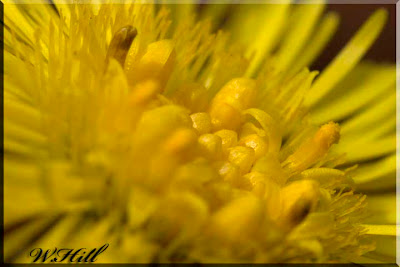 The macro shots were taken by resting the camera on a "bean bag" for support. In this case some type of grain such as wheat was used, but most people take a small bag and fill it with beans, hence the name "bean bag. This makes a passable substitute for a tripod for low level shots, when one must lie on the ground to get the correct angle on the subject.

I was thinking about purchasing a tripod especially for this type of shooting as my Gitzo with Wimberley Head is not the right tool for this type of shot, but then I remembered an old Slik U212 that I no longer use and modified it for macro photography. I have had no chance to use it yet. If it works well, I will post a picture of it and give some more details.