A medium-size stream flows along the border of our farm.  It is officially known as a "Creek", but to old time Fulton County backwoodsmen it is known as a "Crick"  Since I love the old time vernacular I always refer to it by this name.  There is a fording which one uses to access  the other side which I call "goin' acrosst the crick". I have spent a lot of money on repair bills through the years due to water damage to hubs, brakes, and universal joints incurred by "crossin' the crick" as when it is low enough I usually cross it every day to look for wildlife, but that is a story for another day.

When I was young the creek was usually frozen for most of the winter and we spent a lot of time walking and sledding on the ice.  It was an exciting time when a combination of heavy rainfall and melting snow caused the ice to break up, but in recent years this has not happened nearly as often and I have little photos or HD video of this. This changed somewhat this  past Wednesday when I got  photos and footage of  ice flowing down the creek shortly after it had broken up, but it was not as dramatic as some of the ice-outs that I witnessed as a youth.

We received about 24" of snow from winter storm Jonas.  The weather moderated after a few days and the snow went down substantially raising the creek to levels that required a vehicle with  high ground clearance such as my old Ford Bronco.  There was heavy rain last Tuesday night and I really didn't expect to be able to cross on Wednesday morning,, but it if found that it was still a few inches below the maximum level that I would try.  It was plain , however, that  the level would soon be too high for crossing as the feeder streams running into it were high and muddy. As it turned out I was able to return home the same way, but that was the last crossing until this afternoon.

I  drove to the fording that afternoon in hopes of documenting   the ice going out. When I arrived the ice was already gone from the pond immediately above the fording and the water was high and muddy. As I stood there,  the rushing water grew louder and I could hear the grinding and crashing of ice and looked up the stream and saw it was gorged with ice rushing toward me.  I mostly took video of this, but here is a still of the same general area shown in the first photo except part of it is a bit to the right of the area shown above.I usually cross just above the small trees that the ice is smashing into in the center of the photo.  There are certain reference marks that I know to look for to determine if it is safe to cross and there is little to no risk involved when the stream's flow is stable or declining, but the problem with crossing while it is rising is that if the vehicle stalls it must either be gotten out right away or it is almost certain to be severely damaged. In this case, had I stalled out near the trees when I crossed in the morning,and not been able to retrieve the vehicle before the ice went out, it would have been hammered severely by the ice and likely destroyed. 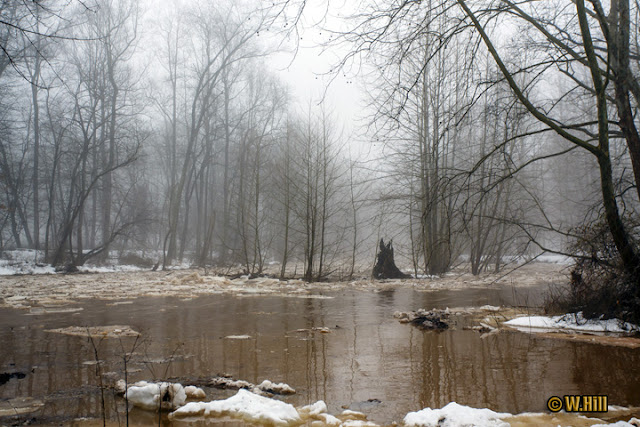 After taking photos and video in this area, I moved on down the stream to a better vantage point and  took more photos and video, but again I concentrated mostly on video. Immediately below is a short video of this.


Ice Out from Willard C. Hill on Vimeo. 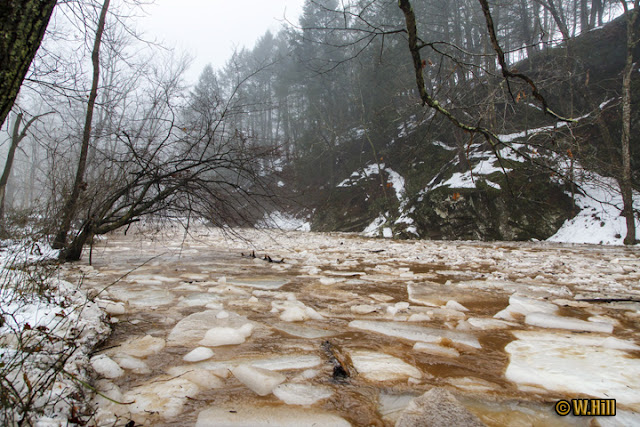 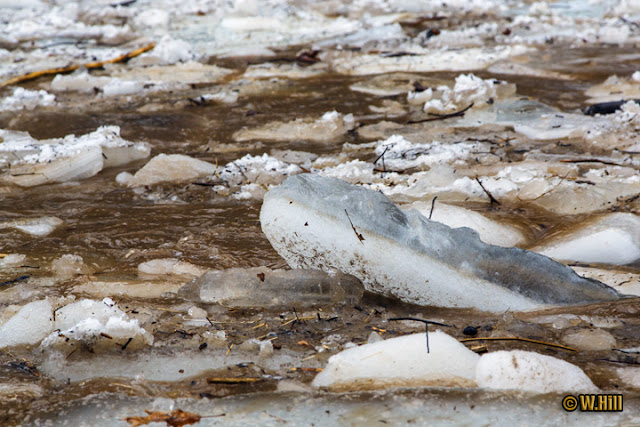 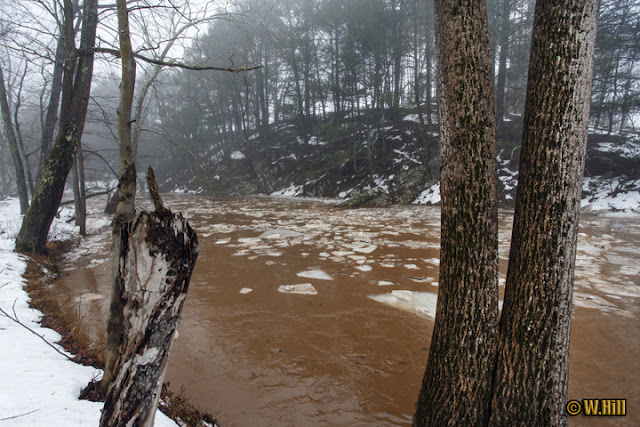 The old timers had a saying  that the creek only froze over solid enough to walk on once a year and that the ice-out was only a once a year occurrence. Now that the ice is gone, and it is only early February,  it will be interesting to see what the rest of the winter brings and if this saying will prove to be accurate.