Today we take a break from the controversial subjects and take a look at what proved to be the dominant bull at the Gilbert Viewing Area during my recent trip to Pennsylvania's Elk Country.
The following photos were taken with a Canon 40-D with Canon 500mmF4 L lens and 1.4x extender. 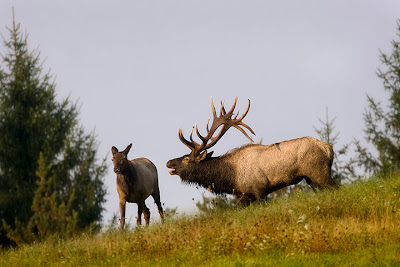 Bull Bugles As Cow Turns Away 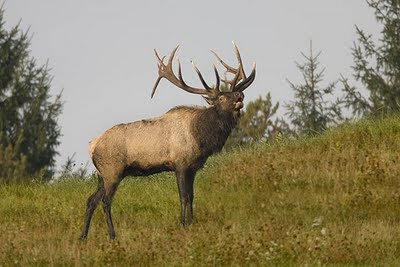 Dominant Bull (9x8) Bugles
On another positive note, it seems that serious interest in photographing the elk herd is increasing rapidly. Only a few short years ago, it was a rarity to see the long, top end lenses deployed on Winslow Hill, but they were there in plenty this year. In fact I probably saw more in two weeks this year, than I have in the previous ten years added together. This indicates that contrary to statements from naysayers that the Pennsylvania Wilds Program is a failure, that it is in fact succeeding in attracting visitors from a wider area, and also drawing more serious photographers.

For more animal photos from around the world, click Here!

DVD In Stock At Benezett Store

The 2-DVD set: "The Truth About Pennsylvania's Elk Herd" is currently in stock again at Benezett Store. Released in September, 2008 the 2hr.-42 minute presentation deals with the history of the elk herd on Winslow Hill from 1995 until 2008. It features stunning footage of some of the largest bulls the state has produced, along with taking a close look at the life cycle of the elk. It deals with the "Elk Culture" that existed on Winslow Hill before the elk hunt began in 2001 and continues in a somewhat modified state to this day. The closing section deals with issues currently facing the herd.
Posted by Willard at 8:36 PM 3 comments 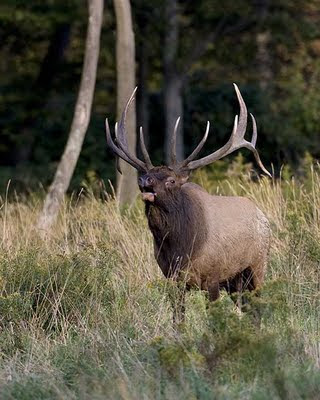 
Rumors have circulated since last fall that the Elk Country Visitors center being erected at the former Betta Tree Farm on Winslow Hill was not necessarily a done deal. The 245 acre tract was acquired by The RMEF( Rocky Mountain Elk Foundation) in September of 2004. Plans were announced to construct a world class visitors center on the site with a co-operative effort between the DCNR (Department Of Conservation And Natural Resources)and the RMEF. The PGC (Pennsylvania Game Commission) was also listed as a co-operating agency, but its role in the project was downplayed, which is somewhat strange since it is the agency charged with regulating and managing the elk herd.

In 2002, Rawland "Rawley" Cogan left his position as PGC elk biologist for one with the RMEF, where he was appointed to the position of Senior Development Officer, responsible for identifying and cultivating support for RMEF projects in Pennsylvania, New York, and other New England States (PGC News Release 017-02). With the acquisition of The Betta Tree Farm, he became the driving force behind the establishment of the proposed Elk Country Viewing Center.

In 2007 if not earlier, signs were erected around the property designating it as a Wildlife Habitat Conservation Project. Entry was prohibited. Many members took exception to this as they felt that since the funds to purchase the property came at least to a certain extent from their membership dues and donations, that they should be allowed access to the area. 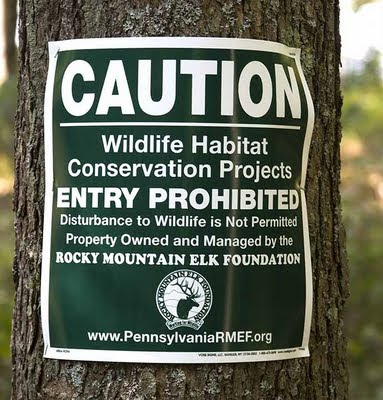 Restricted Sign 2007
Rightly or wrongly many perceived that Rawley Cogan was personally responsible for restricting access to the property. In at least once instance, irate RMEF members approached Cogan about this. He sympathized with their concerns, but asked them to bear with him until the visitor's center was complete and there would be a strong likelihood that they would be permitted to serve as volunteer interpreters at the viewing blinds, which were to be located at strategic points about the property. They could then combine elk viewing with performing official duties.

There was and is a strong perception that the restrictions were made without the approval of "Missoula". (The location of RMEF National Headquarters) It is my understanding that numerous complaints were made to the leadership, both by phone and letter regarding this situation.

I arrived in Elk County on September 20th, to find the grapevine buzzing with the rumor that the RMEF had turned its share of the property over to DCNR. This proved to be the case as the RMEF posted an article on their website on Sept. 15, 2009, which corroborated that portion of the rumor. Mr. Cogan allegedly resigned from the RMEF shortly after the organization announced its withdrawal from the project. 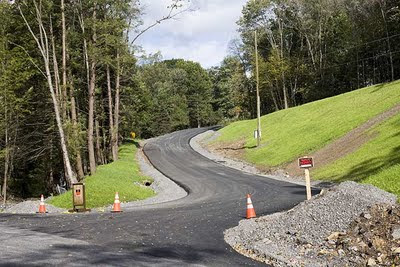 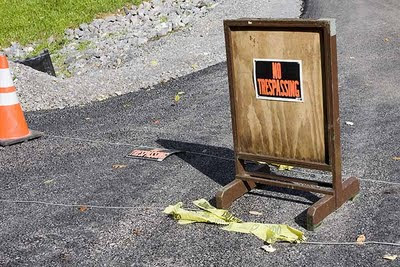 Liability Protection?
No trespassing signs were recently posted by the new driveway that is under construction. Some felt this was the "straw that broke the camel's back" so as to speak, and brought on the withdrawal of the RMEF. Others pointed out that this could be solely for liability reasons, so as to prevent persons from being injured in the construction area.

Whatever the case, there were a lot of unhappy RMEF members on Winslow Hill during the past few weeks with talk of chapters disbanding or persons dropping their membership in the RMEF, etc.

For a more detailed account of the transfer, read this edition of "Resource", which is a newsletter published by DCNR.
Posted by Willard at 9:26 AM 3 comments

As the pre-rut kicks in whitetail deer movement patterns change dramatically. Many if not most bucks will disperse or leave their home range during their first autumn as a rack buck. If not they usually disperse the following spring. This is a built in mechanism to prevent inbreeding. If they do not leave willingly, the does will harass them violently to encourage dispersal. This is the first year that I have seen two year old rack bucks remain in their home range until September. In both cases their mothers were lost to either game law violations or in season harvest on a neighboring property and so were not there to drive them away.

It is difficult if not impossible to tell in most cases what actually happens to the animal. Do they actually disperse or are they taken in game law violations, or legitimate archery hunting on nearby property. In many cases during the past, the bucks have not been legal game for adult hunters. In many of the cases I have seen, it boils down to three options: dispersal, game law violations, or there are a lot of extremely proficient junior bow hunters out there. 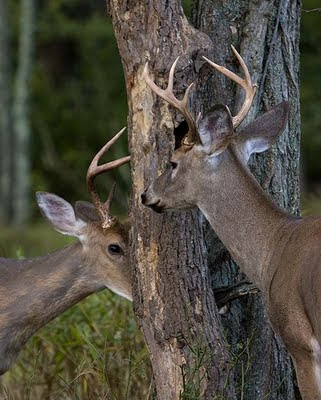 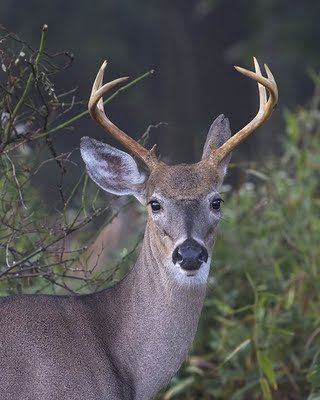 Largest Buck On A Foggy Morning
The largest buck, which has also been shown in many posts was definitely alive and well on Wednesday of last week (Coy of Country Captures saw him), but I had not seen him since I returned from photographing the elk rut until this morning.

I was pleasantly surprised to see him walk into the meadow, but then I noticed a long, deep, angry looking gash along the backbone on his left side. 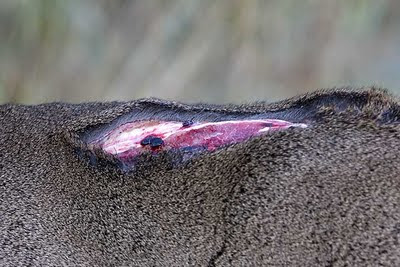 Wound
Archery season did open on Saturday, but this looks more like a rifle bullet wound to me. It would also be more likely for an archer to be in a tree stand shooting down at the animal and this is a grazing wound that is angled in such a way that it appears to have been inflicted from ground level. 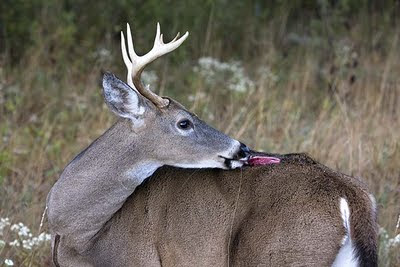 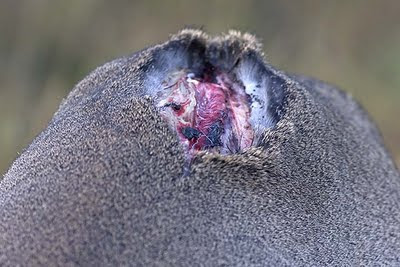 Wound From Front To Back
The local Pennsylvania Game Commission officers have recently arrested several people for shooting deer at night by use of artificial light. For those of you who do not know about this activity, the criminals drive about the backcountry shining a spotlight until they locate deer and then attempt to kill one or more of the animals. The weapon of choice is a rifle, most often a .22 magnum, although the heavy calibers are also used quite frequently. It seems most likely that this animal was the victim of another such attempt.

Fortunately the bullet did not go true and the animal survived, but a close look at his eyes through the 500mmF4 reveals a slightly glazed look, which indicates the animal is in a great deal of pain.

The animal should recover from this wound in time if given the chance, but is most likely that the first buck will never return. I would almost bet the farm that the criminals will return to make another attempt on the life of the injured buck.

I realize that most will find the wound photos very disturbing, but I feel compelled to show them as it demonstrates only too well the consequences of this type of behavior. Unfortunately in too many cases the perpetrators would feel no remorse upon seeing the photographs, but would shrug and say something like, "well at least we didn't miss him completely".
Posted by Willard at 9:50 AM 12 comments