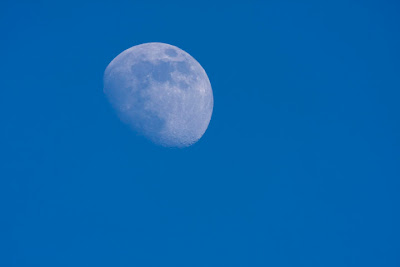 This is a sort of a different take on the sky watch logo with this photograph being taken shortly before sunset, yet the moon was plainly visible. 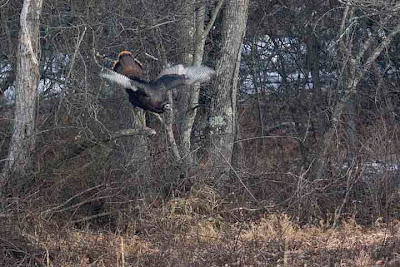 Eastern Wild Turkey: Canon 40D 500mmF4
In our area, wildlife sightings usually increase toward the end of January as the animals and game birds lose some of their fear of humans since most of the hunting seasons are over.
Food also is harder to come by at this time of year and wildlife spends a greater portion of the day searching for it and they look for it in areas where they are more easily visible.

In this case a small flock of turkeys came into my observation area. One spent ten minutes or so standing on a branch and eating something that was in the tree top. I could not tell what it was eating, but it must have been remnants of seed pods or berries.

I took a large amount of video with the Canon XL-H1 with 35-350mm lens. At one point I left it run unattended and took a series of shots with the 500mm and 40D which was mounted on a tripod and standing beside the camcorder. As luck would have it, I happened to capture the moment that the turkey jumped for the ground.

It then joined other birds in feeding on weed seeds.

To the best of my knowledge the Pennsylvania Game Commission has produced detailed video documentaries on three species. Harold “Hal” Korber did most of the shooting, video production, and editing. It is possible that assistants aided him at times in certain aspects of the work.

The first was, “On the Trail of Pennsylvania's Black Bear”. This 100-minute video documented a year in the life of the black bear along with quite a bit of information about bears and bear management. It was narrated by Dr. Gary Alt, who was later to gain fame, or notoriety, depending on ones’ point of view, as the architect of a whitetail deer management plan designed to drastically reduce Pennsylvania’s deer herd.

This was followed by, “Pennsylvania Whitetails: Living with Change,” which was 75 minutes in length and was two years in the making. Land Management Officer, David R. Koppenhaver of Bedford County, narrated it, although if I recall correctly he was a District Conservation Officer at the time. I had the privilege of working in his land management group, and on my promotion to Maintenance Supervisor, he became my immediate supervisor.

Pennsylvania Elk “Reclaiming The Alleghenies” is an 85-minute production, which was released on VHS video in 1999. It was shot in the approximate time period of 1995-1998. It was narrated by then PGC Elk Biologist, Rawland “Rawley” Cogan.

All of these videos are available yet today from The PGC Outdoor Shop, but they are in VHS only. They were introduced at about $30.00 each, but are now selling for $5.00 each.

As I mentioned in previous postings, Billie Cromwell shot significant portions of the elk video with the Canon L2 camcorder. His preferred lens was the Canon 35-350 L with the EOS adapter. 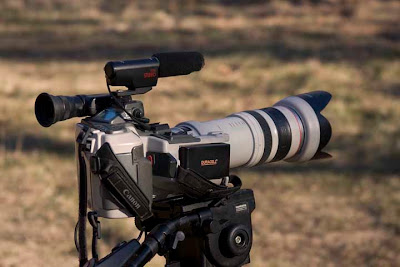 My Canon L2 with 35-350mm L : Billie Cromwell used a rig like this to shoot the elk video.
Hal Korber is an excellent cameraman, but he had to use what the PGC provided him. Initially this was a monstrous S/VHS industrial camcorder, but during the course of the shooting he was provided with either Mini-Dv or DV-Cam equipment. The S/VHS footage had a colorcast and noisy areas in the image. It is easily possible to tell this camera from the others.

Mini-DV was the hot new prosumer format and DV-Cam was similar but more geared to the professional market., These formats should have been superior to the Hi-8 format of the L2 and in fact most likely was on a sheet of written specifications. In actual use, the superb Canon optics outweighed any advantage gained by the Mini-Dv format and it is difficult to tell footage from these cameras apart. I well remember Hal telling us that we definitely did not need new camcorders. In spite of the performance of the new equipment, he was still impressed by the image the analog L2s delivered.

The bottom line was that Hal had a limited amount of time to shoot, with tremendous pressures to bring this complex project to completion, while also dealing with other demands on his time. Hal did shoot the interview portions and also quite a bit of the wildlife segments, but it was a tremendous advantage to have Billie available with his L2 to assist in the wildlife shooting aspect.. The 35-350 was approximately the equivalent of a 89mm-1890mm zoom lens, in 35mm still camera terms. This enabled Billie to take stunning video in many situations where Hal could not. 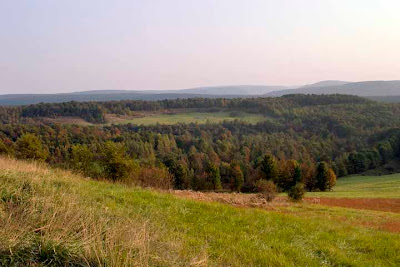 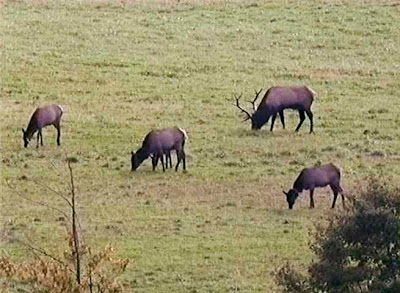 I didn't keep records of specific shots with the L2, but to the best of my recollection the above shot was taken with an old Spiratone 400mm pre-set lens which was between $50-$75.00 new in 1974. This lens was not very sharp and standard definition video does not make excellent stills, but this does give one a decent idea of the long range ability of this outfit and how it enabled Billie to really "reach out" and get outstanding footage.