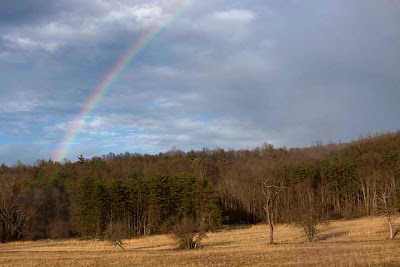 Canon 40-D: Canon 28-135mm EF
With the weather conditions being more like late March than early February, I was not surprised to see a rainbow after a brief shower on Wednesday evening.
Posted by Willard at 7:21 PM 39 comments 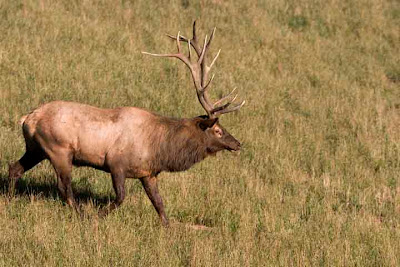 The first September elk season was held in 2006. It was preceded by an intensive public relations offensive, to sell the concept to the public. It was portrayed as a win-win situation for hunters and landowners alike. What is unclear is exactly who requested the season in the first place!

It doesn’t seem that most farmers did, or if they did they didn’t take the hunt seriously. An elk guide told me “off the record” that most of those farmers didn’t need or want any help with the "elk problem". They took care of it quite handily at night with tractors, rifles, and spotlights.

He guided hunters on this hunt and on at least one occasion removed his clients from the area, as there were a lot of hunters, with magnum rifle slugs flying everywhere. Two elk were killed during that season, but according to the guide, The PGC termed it “an outstanding success”. In the two years that the September season has been held, 20 hunters killed a total of four elk.

Some critics of the September hunt considered it to be a trial balloon floated by the PGC to determine the public’s reaction to a September hunt, and had the hunt, been successful it would have been extended to other areas of the elk range.

Such a hunt would disregard the thousands who flock to the north woods to view the elk during the rut.

The November hunt continues with a proposal to issue 45 tags being considered. As of yet there has been no decision as to the sex breakdown or the number of animals in each elk hunt zone.


The final September hunt will be held in 2008 as the licenses were issued in last year's drawing, and this years hunt was already approved.