I left for Pennsylvania's Elk Range at noon on Monday and returned on Friday afternoon. The mission had two major purposes. One was to finalize some of the research I am doing for the Elk Video.

The secondary mission was to get footage of cows and calves, nursing. I did have a segment already inserted in the film, but was not particularly happy with it as the cow was wearing a collar. It rained on most days and if it wasn't raining the weather was mostly overcast with a few sunny periods. I did photograph and record some bulls and cows in early morning and late evenings, but I saw not one calf until Thursday morning and these didn't nurse.

The weather finally cleared late Thursday afternoon and miracle of miracles, I found a large herd of cows, calves, and young bulls with a mature bull lying some distance from them. I worked into a suitable position for the camcorder and mounted the 70-200mm f2.8 with 1.4x extender, which gave an effective focal length of 2,016mm. There were about five calves in the meadow. At first they were lying down, but as the sun descended in the western sky, one by one they searched out there mothers and began feeding. My persistence had paid off.

I took a few still shots along with the video, and while I was not nearly as close as I would have liked to be for the DSLR, the results were still acceptable. I used the 100-400mm rested over the camcorder body and of course utilized image stabilization. 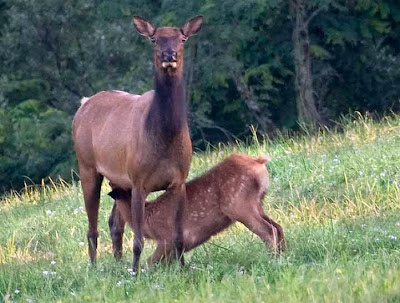 
At one point two small bulls engaged in a lengthy confrontation. At times they stood on their rear legs and clubbed each other. I especially liked the wild look in the eye of the larger bull in this shot. 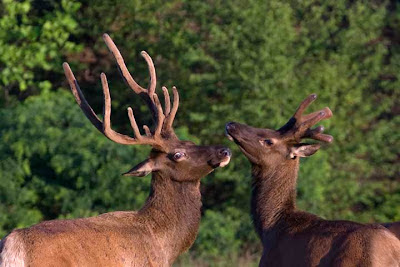 At sundown the elk slowly drifted from the backcountry into a meadow closer to civilization. I brought up the rear, filming them as I went. They stopped to feed in a Game Commission food plot, which borders private property (the cabin is on private property quite close to the line). A smaller sub-group of elk cane from another area and joined the herd I followed there, and for a time the meadow was alive with elk.

I hope to post more photos from this trip soon.

For photos from other participants visit Mist Dawn.
Posted by Willard at 12:02 PM 35 comments