While the pedicels are visible on the mature bucks throughout the winter and early spring, there is little significant growth until now. This two year old shows promise and should develop into an eight-point or more with a beautiful spread. (He was a three-point last year) 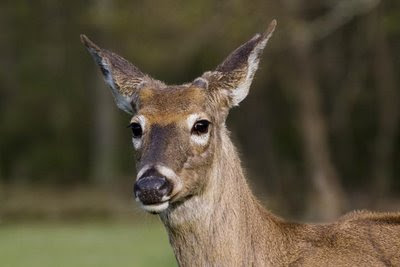 Why Is He Pointing That Thing At Me?

Most bucks disperse from their home range or are killed in their first autumn with antlers. Luckily this animal was not a legal buck except for junior hunters and he did not disperse so he is still with the local herd. It is unlikely that he will remain through the summer, but time will tell. 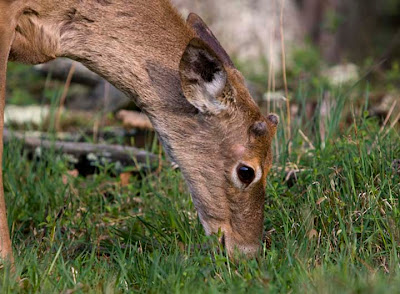 A deer divides their time between eating and resting at this time of year as the rut and hunting seasons are over, and the fawns have not yet been born. 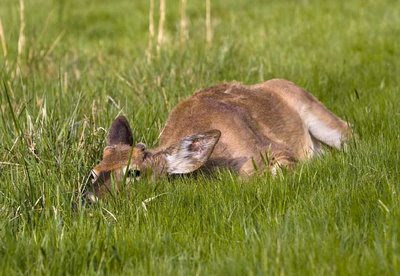 For more Camera Crittters photographs, click Here!
Posted by Willard at 9:16 AM 16 comments

I had just positioned the cameras at my favorite wildlife viewing area when I heard a vehicle rapidly approaching and saw that it was my brother "Salty". He informed me that a vehicle was stuck on the creek bank on our farm. He had already talked to the subjects, but wanted my input also, so we traveled to the scene. There were two young men with a vehicle solidly anchored on the creek bank. 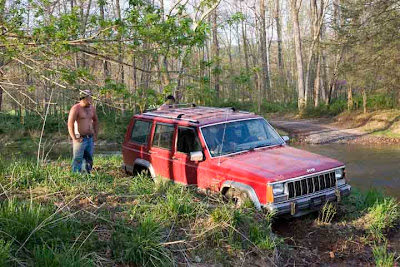 They Just Can't Believe It Happened 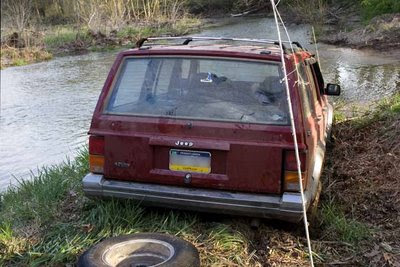 The big questions were how and why it got there. The driver had a distinct odor of alcohol on his breath and alcoholic beverages were plainly visible on the rear floor of the vehicle. 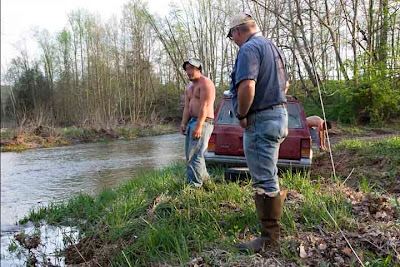 Driver on left-Salty on Right

The driver said they had been a'fishin' all day and decided to visit this area. They started to cross the stream by the roadway visible in the following photograph. The red line denotes their line of travel. 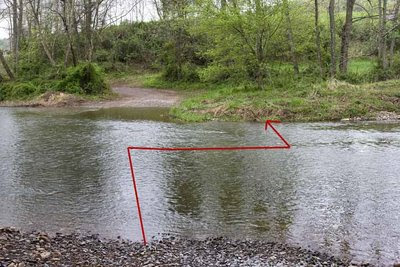 At the point that the red line veers sharply to the right he became frightened that there was a big rock in his path of travel so he decided to try the high stream bank, which appeared much safer to him.

I cross this stream every day and have yet to see the big rock. There has been a lot of problems in this area with persons driving through fields, throwing out empty alcoholic beverage containers, etc.

While they were on our property, it was a minimal amount so we decided to not press trespass charges against them. Their punishment was to retrieve their vehicle as best as possible without our assistance. We were at the farm buildings discussing the situation when we heard a loud roaring noise, so we returned to the area and found that they had succeeded in escaping from their predicament.

Their story is one of the poorest rationalizations I have heard. There is little doubt that the operator was driving under the influence of alcohol and decided to see if he could jump the vehicle over the stream bank. To top it off, it was his dad's vehicle.
Posted by Willard at 9:04 AM 10 comments

While I have mostly concentrated on the turkeys lately, there is much else taking place in the outdoors. Turkeys and deer co-exist well as the photo below illustrates. 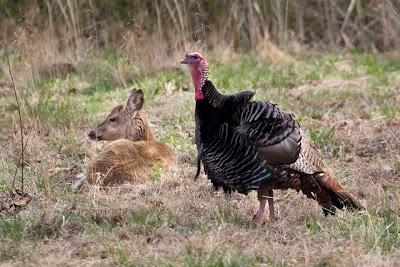 Sharing The Same Space
The whitetail bucks are now showing some progress in the development of antlers. The button bucks (last years' male fawns) still show little to no signs of antler growth, but the bucks that will be two years or more old in late May and early June have visible, velvet-covered knobs. 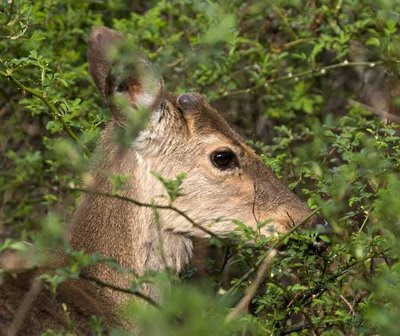 The last few days have been unseasonably hot and even the birds are panting as this sparrow illustrates. Of course from the photograph one cannot tell exactly what the bird is doing, but it was a panting type motion, with the chest heaving in and out, but with no song, etc. to accompany the motion. 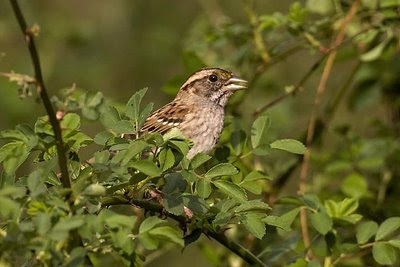 Whitethroated Sparrow
Watch for future posts about whitetail antler development.
Posted by Willard at 11:47 AM 10 comments