To understand this series of photographs better, please read the post of Tuesday March 4th, first, as it lays the background for today's series. 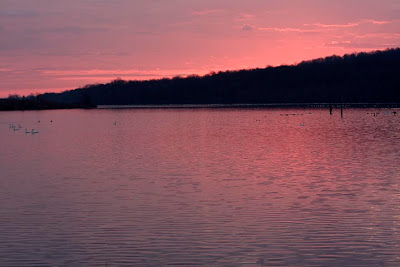 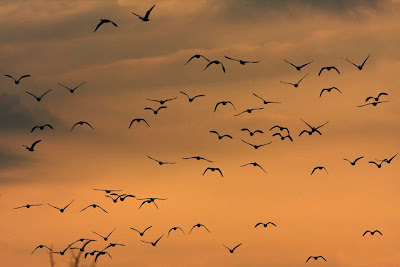 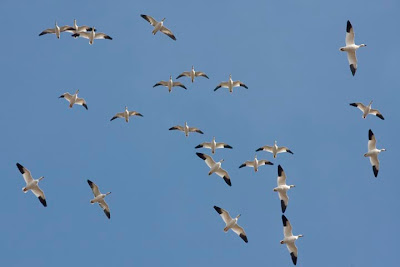 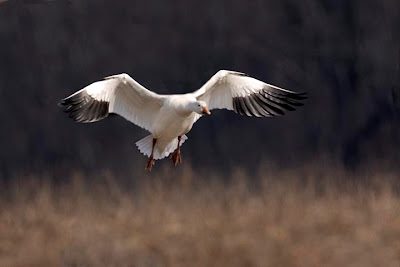 In spite of a mostly overcast sky, there was a colorful sunrise. At sunrise many of the waterfowl left the lake to feed in the surrounding field. For a time we had few good photo opportunities, but finally the sun broke through the overcast for good and we were treated to that bright, yet milky sunlight that often precedes the arrival of a storm front. This type of light is a result of the sunlight being filtered by a high thin clouds although sometime areas of the sky were a beautiful blue.

In late morning we found the geese converging on the corn field shown in the previous post. They came by the thousands, circled over the area, and then swooped in for the landing in the corn, where they fed on what grain that still remained.

4:00 in the morning, heading east on the Pennsylvania Turnpike with the hammer down. The goal was to reach Middle Creek Wildlife Management Area near Klinefeltersville, in Lancaster County by dawn. It is hard to get motivated that early in the morning, but the promise of good waterfowl photography was a strong motivating factor.

Sunny, skies were in the forecast, but only a few scattered stars were visible through clear spots in the otherwise cloudy sky and there were wet patches in spots on the highway. Even though the sun would shine later in the day, the morning promised to come in cloudy and raw with light wind.

The main attraction at this time of year are the Tundra Swans and Snow Geese, which stop off for a short time on their return north from wintering in areas where the climate is less severe. In time they reach the arctic tundra where they spend the summer, nesting, and raising their young.

The Pennsylvania Game Commission administers the management area. Its’ primary focus is waterfowl and it is a popular hunting area in season, but there is a modest no hunting zone. This area is popular with bird watchers, hikers, and other outdoor enthusiasts. It is home to a few eagles but we were not to see any today.

We did find a large flock of snow geese along with some tundra swans, Canadian geese, and miscellaneous ducks and songbirds.

The highlight of the day was when we found a large flock of snow geese feeding in corn stubble.

They gave spectacular photo opportunities as they gathered in large groups and staged for landing or as they were in the process of touching down. 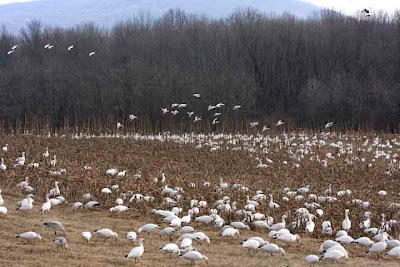 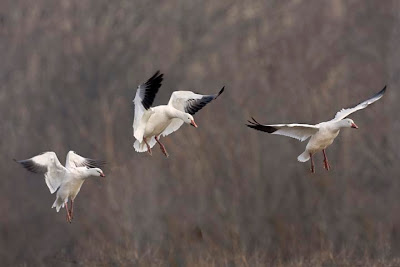