As mentioned in the last few posts, this is the time of year when the young elk and whitetail deer are born, so I traveled to Pennsylvania's elk range this past week to photograph the young elk, known as calves. Some of the cows were still pregnant, but many had given birth. Several calves were sighted, but they were often too far away for still photography. I arrived in time for the evening's photography on Monday. There were beautiful weather conditions that evening and the following morning, but by Tuesday evening the clouds were thickening and rain was in the forecast. There was intermittent rain during the rest of the week and lighting conditions were less than ideal for still photography, but that being said, I still had some excellent encounters.


In a few cases, calves were found standing by the roadside. There was actually a herd of cows with four calves in this encounter where I used the 70-200mm at 200mm and ISO 640 to capture a portrait of the young animal. 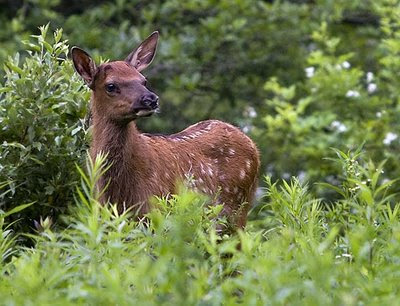 Calf By The Roadside


The best encounter was when I saw well-known local videographer, Tom Murphy standing on the river bridge behind Benezette store pointing his camcorder at something in the grass beside the bridge. It turned out to be a beautiful calf. Its' mother was nearby and periodically ran other elk away from the area where the calf was resting. This too was difficult lighting conditions and I used ISO 400 to get a shutter speed of 1/80 at f4.5. 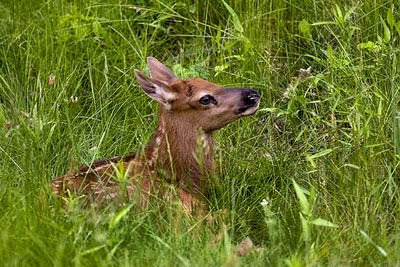 
It is always a welcome treat to encounter bulls and I had several encounters. Perhaps the best was early Wednesday morning, when I found two bulls grazing in a meadow by Winslow Hill Road. 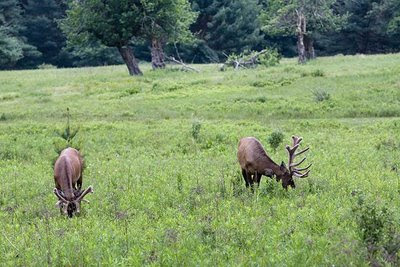 
Neither of these animals were mature bulls, but the largest will have a very respectable rack once growth is completed. 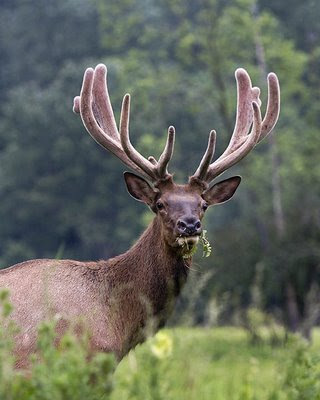 
The elk on Winslow Hill are wild to the extent that they are free ranging and go wherever they please, but they have an extremely high tolerance of humans. At this time of year the cows may be very shy at times as they are extremely concerned about any threat to the young, but they become very trusting later in the summer.

It must be emphasized that one should not approach a young calf, not only to not frighten it, but for your safety as while. While ordinarily very docile, the cows may become extremely aggressive when protecting their young and may attack the intruder.

For more Camera Critters photos, click Here!
Posted by Willard at 10:13 AM 27 comments

They're Here-A Close Encounter With A Whitetail Fawn

My favorite whitetail doe was still pregnant on Saturday morning, but that evening she came to the meadow with sunken flanks, so I knew the important event had happened. I did have an encounter with the fawn later that evening, which I will share at a later date.

After she left the meadow this morning I walked an old roadway nearby and spied her walking up the road with a fawn. I took several photos, but the best was when it walked to the side of the road and posed at the base of the tree. As usual light levels were very low in the wooded area and I had to use ISO 800 with the 70-200mm 2.8. 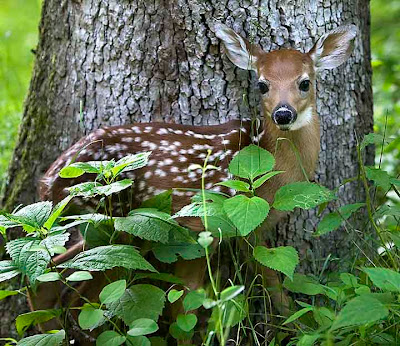 2 Day Old Whitetail Fawn
Due to a busy schedule I will be unable to post or visit your blogs again until the end of the week.
Posted by Willard at 9:28 AM 11 comments