It is that time of year again, when the mating season for Pennsylvania elk is underway and thousands travel to Pennsylvania's elk range to take in the exciting sights and sounds of the rut. 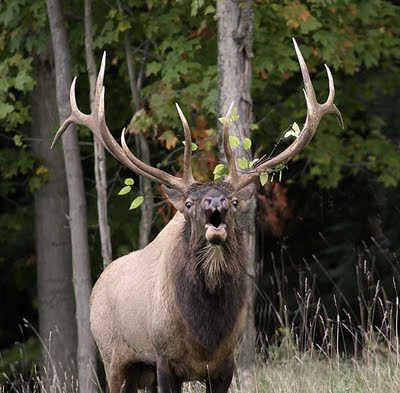 Young Bull Elk Bugling: The Center Of All Of The Attention 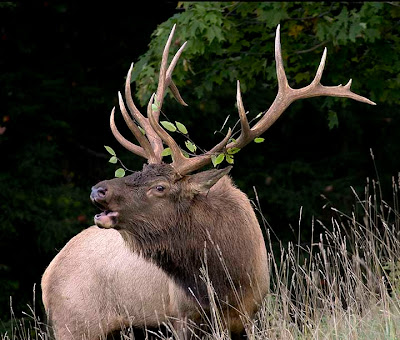 The 2-DVD set "The Truth About Pennsylvania's Elk Herd", which I released last year is currently out of stock at Benezett Store, but should be available again by Sunday evening as I am traveling there tomorrow to join the other elk watchers and photographers, and will be delivering a fresh supply to the store. If you have not already bought a copy, please consider stopping by the store and checking the DVD out. There is a good chance they will be playing it, either in the restaurant or in the back room in the store, where they have a large screen TV, so you can check it out before purchasing. The DVD set, shows the life of the elk through the four seasons of the year. It also takes a look at the "Elk Culture" on Winslow Hill, with a special emphasis on the years from 1995 until the elk hunt began in 2001. It also deals extensively with issues surrounding the hunt.

I will be unable to answer e-mail inquiries or fill orders for the DVDs from the period of September 19, through October 2, 2009 and there will be no further blog postings until that time.
Posted by Willard at 9:26 PM 10 comments

Enhancing Your Outdoor Experience With Photography And Video

Enhancing Your Outdoor Experience With Photography And Video from Willard C. Hill on Vimeo.

My brother, Coy Hill of Country Captures plans to teach a photography class at Youth Field Days at The Fulton County Pistol and Rifle "Club, this Saturday.
I produced this video, which is just over six minutes in length,to start the photography class. The video is a tightly edited presentation of Pennsylvania wildlife including, a bald eagle, golden eagle, turkeys,bear, squirrels, and of course whitetail deer, and elk. It encourages youth to develop an interest in photography. There are a few scenes of Coy and I in action with the big lenses and a short discussion of how a point and shoot camera is an excellent starting point. After the video, Coy will give some hands-on instructions with different types of cameras and teach some basic photography techniques.

Youth Field Days is designed to introduce youth to the hands-on aspect of the outdoor sports and has courses designed to familiarize the youth with the equipment used, and to promote safety consciousness. There are segments on archery, firearms handling, ATVs, boat, turkey calling, and trapping. Deputy Wildlife Conservation Officer Andy Carbaugh has co-ordinated this event for the past several years.
Posted by Willard at 1:35 PM 8 comments

A week ago I featured a segment on the whitetail bucks, and the annual shedding of the velvet. Today we explore the subject in a bit more depth.

After the velvet cracks, it peels off in strips. The photo directly below is actually a strip of velvet that a spike buck just lost. If one looks at the left side they can see how the sheath is shaped like the underlying antler. I pressed the strip against the rough bark of a walnut tree to support it and provide a background to photograph the velvet against. 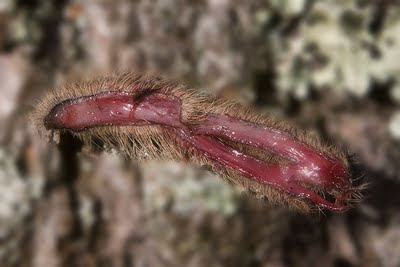 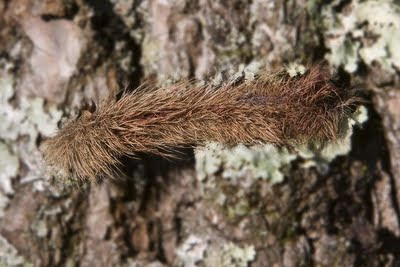 I hoped to get photos and video of a buck rubbing trees and saplings to remove the velvet, but that was not to be. I did see one animal that still had a few long strands of velvet hanging from one antler. This animal still had velvet at dusk on September 12th, but only a few strips remained the next morning. 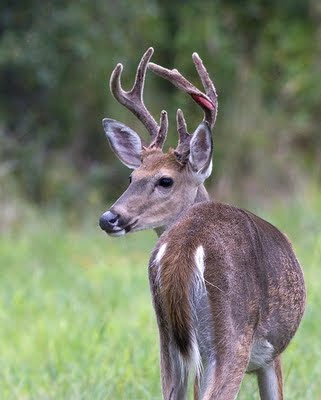 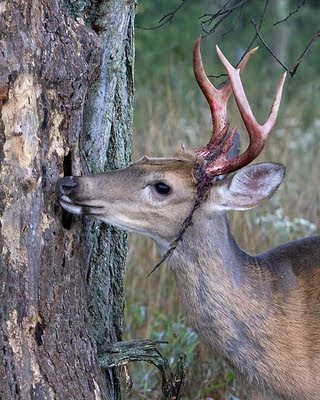 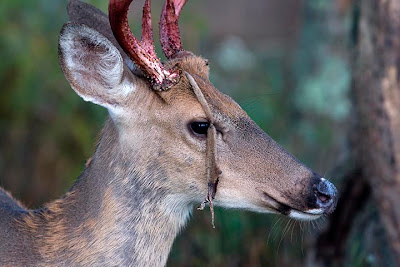 Process Almost Complete
With the shedding completed, the bucks feel the stirring of the pre-rut, and move about more. If one frequents the same spot throughout the summer, it is common to see the same bucks over and over again, but as the pre-rut kicks in strange bucks appear. 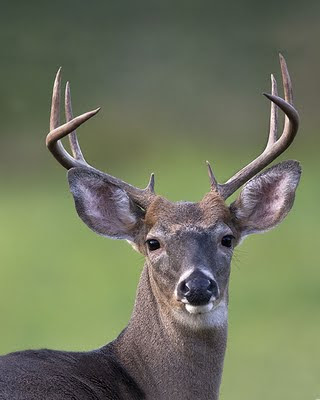 Mature Whitetail Buck: Likely Three Years Old-First Sighting
While it is always rewarding to be afield, at this time of year the outdoors is particularly exciting as wildlife activity increases dramatically with the onset of the whitetail and elk rutting seasons.
Posted by Willard at 7:58 PM 7 comments 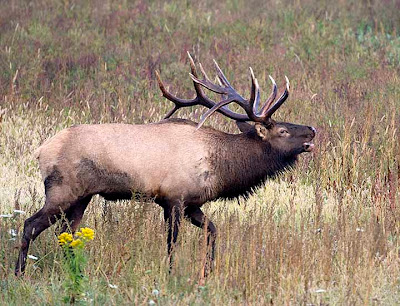 Mature Bull: Gilbert Viewing Area 2008-Later Taken In Hunt. But Well Away From Tourist Areas
According to News Release: 096-09: nearly 800 individuals tuned in on Friday September 11th, to watch The Game Commission's first ever Webcast of a public drawing for bobcat and elk licenses.

The drawings were to start at 10:00, but I was late returning from a photography session and didn't get online until about 10:30. As a result I didn't learn what official was conducting the drawings, but he was an effective speaker and kept the proceedings moving as best as could be expected. The most time consuming process was displaying the names of those who were awarded the 1,780 bobcat permits.

Executive Director, Carl Roe stated (in the news release) that, "the drawings for the 59 elk licenses seemed to go smoothly". Each winner's name and hometown was briefly displayed along with the information as to whether it was a bull or cow tag and the hunt zone to which the hunter was assigned.

59 tags were issued at the drawing, while one bull tag was auctioned off earlier for $28,000. This money is to be used for habitat development and maintenance in the elk range. This year the tag was awarded to The National Wild Turkey Federation. The agency intends to auction another tag next year, but according to the official it has not been decided which organization will receive it.

According to the press release, state law forbids the publication of the successful applicants names, so interested persons can check on the status of their application after September 16th, by clicking the appropriate links on the agency's website. Previously applicants had to either attend the drawings, call the PGC, or wait until they received a notification letter. (information on the exact steps is included in the news release)

The official conducting the drawing gave several statistics. 1. The elk herd has increased in the Winslow Hill and Pottersdale areas, 2. 45 licenses were issued for the November 2008 season, and 40 hunters were successful, 3. There was a 94% success rate on antlered elk in the 2008 season.

The above data does not include the ten licenses, which were issued for the September early hunt in Zone 1 and resulted in the harvest of two elk. The September hunt was discontinued after last year.

All in all the Webcast seems like a good idea. The viewing screen is small with a resulting lack of fine detail, but it does allow interested persons to observe the proceedings without traveling long distances and missing other important obligations.

If I understand The 2009-10 Hunting Digest correctly, there are two bull licenses allocated for Hunt Zone 2 and 2 for Hunt Zone 8, which are the zones that most directly impact the viewing areas. For the last several years zones 1,2,3, and 10 were combined and zones 7 and 8 were combined, which made it technically possible for up to 12 bulls to be taken in relative proximity to the major tourists areas. These zones are apparently no longer combined this year, which means 4 bulls may be taken instead of the 12 possible last year, or it will be 5 if the winner of the auction tag decides to hunt in one of these areas.

This reduction shifts some of the focus from the animals that are more accustomed to humans and frequent the tourist areas. While many bulls do travel long distances to Winslow Hill during the rut, and return after it is over, quite a few do remain in the area. As a result the above policy change does improve the chances for mature bull survival, but it is not as good as a somewhat larger no hunt zone, or a population control only hunt zone
Posted by Willard at 9:49 AM 3 comments