The Eastern Woodchuck is an animal, which shares many physical characteristics with the Marmot, which inhabits the western states. This animal likely derived its' name from originally being a woodland species. It adapted well to the presence of man and developed a preference for crops. They are notorious for damaging hayfields and gardens. Their place of abode is holes, which they dig into the earth. Livestock sometimes breaks legs by stepping in these holes and they can damage farming equipment. The animals also dig the holes along foundations of buildings. It is common to find them in close proximity to humans where an aggressive extermination program is not implemented.

Hunting these animals is termed "varmint hunting" and some pursue them throughout the warm weather months, often killing large numbers of them.

If they are in an area where they do not cause the above problems, they are beneficial animals with the holes providing escape routes for other species of wildlife such as rabbits, to elude predators. 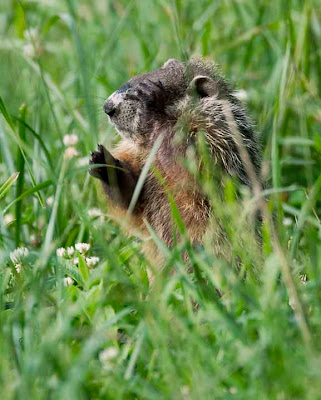 This animal is pictured in a clover field which was planted solely as a wildlife feeding area, so its' presence was not a problem and the animals are not culled in this area. This is one of my favorite woodchuck shots because of the animal rubbing its' eye. The animals ordinarily travel and feed in a horizontal position with all four feet on the ground, but they repeatedly stand erect to survey the countryside for danger.

A unique opportunity occurred today when friends were loading fence posts from the lower story of a backcountry barn and uncovered a nest of young chucks. There was no opportunity for photos there due to it being too dark, so one of the chucks was carried into the open for a photographic session.

Ordinarily one is told not to handle the young of wildlife, but in this case the animal was immediately released back into the wild and I have no reason to believe that the brief human contact will cause the mother to abandon the young animal. It is not as though we were searching for a nest to photograph, but rather the nest was inadvertently disturbed in removing the posts and we seized the opportunity to photograph one of the young animals. 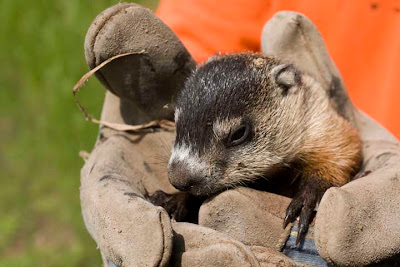 Juvenile Eastern Woodchuck: Canon 40D: 17-40mmF4L
It is likely that this animal was born within the last week or so and is quite young indeed!

Major natural predators that keep woodchuck populations under control in many cases are coyotes, and foxes.

Sky Watch Friday: Of May Skies, Flowers and Battles!

Spring Skies, Meadows, and Dogwood Blossoms: A Touch Of History

All of the following photographs were taken near my home in Pennsylvania, but they remind me of great events in Virginia in the 1860s! 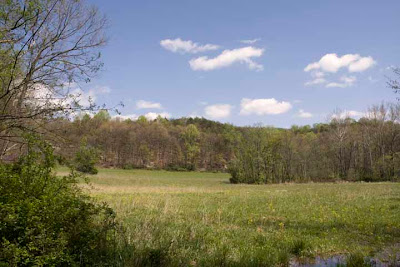 A backwoods meadow much like those in The Wilderness 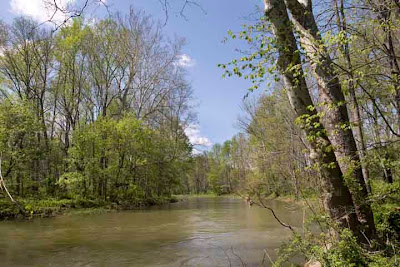 Smaller than The Rapidan, but it reminds me of it! 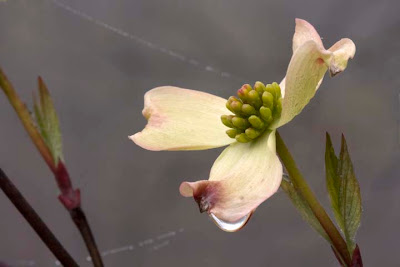 The Dogwood: Reminiscent to many of Easter 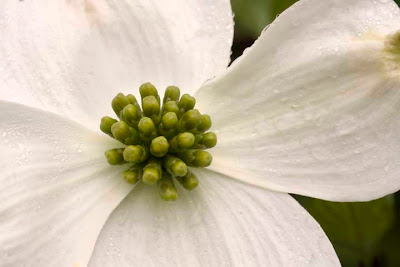 It reminds me of great historical events from the 1860s
Late April and early May brings sunny skies and spring showers. The woodlands and meadows explode with flowers and blossoms as the combination of moisture and warmth sparks a rapid period of growth.

During our Civil War or War Between The States, this period also marked the time that the predominately dirt roads of that period became stable enough for armies to take to the field.

In 1863 and 1864 two great battles were fought just west of Fredericksburg, Virginia.

In both cases the Union Army regrouped from the previous years fighting in the Fredericksburg area and the spring offensive was launched from there.

I mention this today as each year at this time I think back to those happenings. As an avid reader of Civil War History, I came to associate the blooming of the dogwoods and the leafing of the trees with these battles, as many of the accounts of the time give detailed descriptions of the Virginia countryside and they always mention the dogwoods, the leaves, and the calling of the whippoorwill. Although our area is evidently hillier than that part of Virginia there is still a strong resemblance. Surprisingly, I have not visited the area, but am relying on written accounts and current photographs. In the 1860s the wilderness was an area of scrub oak and pine thickets interspersed with small fields. When one was reading the books it was easy to picture the type of terrain, because of the similarity to home, not to mention that the whippoorwill call was frequently heard here back in the 1960s when I started studying the war. It is sad that I haven’t heard one for many years and have no audio recordings of them.

As an aside, The Civil War has always been of particular interest to me, as one realizes that had the been born in that period of time that they would likely have been involved in some of those events and perhaps have died or been seriously injured in them.

The first battle was known as “Chancellorsville”, which ironically was not the name of a town, but rather a crossroads with a large house and most likely some outbuildings, located in a brush overgrown area of Virginia known locally as “The Wilderness”

The Union Army of The Potomac launched its’ offensive on April 27,1863 and came to battle with Robert E. Lee’s Army of Northern Virginia, on May 2nd, in fighting which focused around the crossroads area, with other important action taking place nearby also. The battle ended when The Union Army retreated back across The Rapidan on the night of May 5-6th.

There were about 24,000 persons wounded and killed, with an estimated 1,600 killed in action on each side. The Union Army outnumbered the Southern Army by more than 2-1, but Union Commander General Joseph Hooker was completely outgeneraled by Lee.

One year later, in early May of 1864 The Army of The Potomac commanded by General George G. Meade launched another offensive southward in the same general area.

This time the battle was named “The Wilderness” after the area in general and not a specific spot. Again, the odds were heavily stacked in the Union Army’s favor, but this time there was an important difference. Now the newly appointed commander-in-chief of all of the union forces, Lieutenant General U.S. Grant made his headquarters with the Army of The Potomac and made the important decisions, while Meade dealt with the day to day administrative details of the army.

Grant met every bit as much of a disaster in the Wilderness as Hooker did at Chancellorsville, but he was known for being a determined officer. For the first time a union general did not concede defeat and go back north to rest and refit for the next try. This time there was to be no turning back until the end of the war in 1865, and Grant put the Army of The Potomac on the road south where it was involved in another horrendous battle at Spotsylvania Court House, which began on May 8th.

Total casualties were 18,400 for the Union and 11,400 for the Confederates, with more unbelievable carnage in the days to come, as now there were no pauses to regroup.

Sorry for the historical rant! I'll get back to wildlife issues in the days ahead.
Posted by Willard at 3:42 PM 26 comments

I have been lax at blogging for the last few days as I have been devoting much of my time to video editing, which is extremely time consuming. Billie Cromwell has rendered much assistance in researching the elk video that I am working on. During the course of our consultations, he has shared many interesting experiences. He also provided me with some video footage and gave permission to share it on the blog.

It was in the latter part of September in 1994 and Billie Cromwell was in Elk County, recording the elk rut. From his first trips to the elk range until 1993, Billie used Minolta SRT cameras with an assortment of lenses, the most powerful being a Vivitar 400mm f5.6. There was a lot of rain and cloudy weather in 1993 and Billie had little luck getting the pictures he wanted with the still camera, so he returned home and purchased a small Sony 8mm Handycam, camcorder.

I started shooting video in 1990 with a monstrous Sharp VHS, camcorder. The Sony had equal or better picture quality and was very easy to carry. Billie returned to Elk County with it and got some footage that fall, but the investment really paid off in 1994, when he had several excellent encounters with large bulls.

This experience encouraged him to upgrade to the Canon L2 in 1995 and led to his participation in the filming of the Pennsylvania Game Commission's Elk Video,"Pennsylvania Elk: Reclaiming The Alleghenies". This footage also impressed me so much that I thought of little else, and I visited the elk range for the first time on President's Day of 1995 and returned for a one day scouting trip in August. I returned for about a week at the end of September.

It is possible that I would not be interested in elk today had Billie not taken this footage.

In today's post we see a short section of an encounter with a mature bull in a remote mountain meadow. Elk are usually more active in early morning and late evening and this is especially true of animals in the remote areas.

It was a long, difficult hike to the meadow and for a time it seemed that it was wasted effort except for enjoying the splendid mountain scenery, but as it was growing late, a large herd of cows and the bull emerged from the woodlands and approached Billie's position. He was in an opening in a hedgerow between two food plots with a cow behind him. The monster walked in to close range and stared at Billie. This type of experience is not to be taken lightly and Billie gave a great sigh of relief when the elk turned away and bugled instead of trying the come through the opening.

Special Note: Unless your connection is exceptionally fast it works best to let the video play through once, which on my computer is jerky with broken audio. Replay it to watch it seriously and it should play smoothly. (I don't think there is any chance it will work with dial-up.)

Hopefully in the near future I will be able to post another short segment or two on these video clips from the early years.
Posted by Willard at 9:42 PM 9 comments