While sorting through some pictures from this summer in search of suitable pictures for a DVD jacket I came upon this sunrise photo which was taken on August 26, 2007. The camera was the Canon 10-D with 70-200mm F2.8 L IS at 70mm. 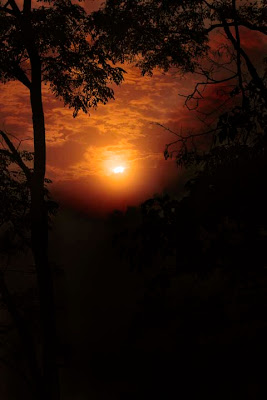 I don't remember exactly how I did it, but I added the fiery color in photoshop. It was sort of drab looking before I did that. Actually it would likely make a decent black and white also.

I hope to soon continue the narrative about the elk, but there has been too much going on lately to do serious writing.

Here is a shot of one of my favorite subjects. This was taken quite recently with the Canon 40D and 500mmF4 lens. This deer totally accepts me and was not alarmed at my presence.
She and her cohorts, live over a mile from the nearest highway and are not likely to cause a collision such as happened to Kerri's son over the weekend. Although deer are my favorite animal they do cause problems at times. I am glad that her son escaped the encounter without injury! 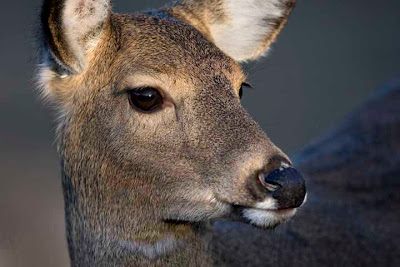 When I see them this close I often watch their expressions and wonder what they are thinking about.

This Camera Changed My LIfe! 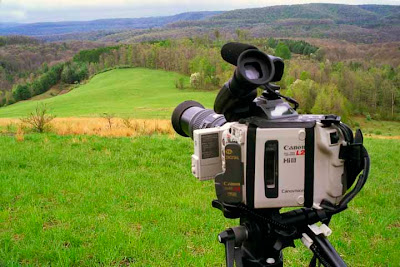 When I acquired the L2 in 1997 I was an avid squirrel, woodchuck, and turkey hunter, but my first and foremost interest was hunting the whitetail deer, whether it be with gun or camera.

A favorite activity was hunting turkeys in the fall, which coincided with the mating season of the whitetail deer or “the rut” as it is commonly known. I acquired my first SLR, a Minolta SRT 101 in 1974 and from that point on usually had a camera along. When I changed to video in late 1990, the SLRs were replaced by a VHS camcorder. I didn’t carry a tripod so that I could also have the firearm along.

This approach worked well for several years, but over a period of time I found that I enjoyed the whitetail photography and video recording more than the turkey hunting, and often wanted to kill a turkey quickly so I could put the firearm away and concentrate on the photography. Although I didn’t have inkling at the time, this compromise situation was about to change.

As I mentioned earlier, I bought a used L2 camcorder in May of 1997. That fall I bought a Canon 75-300 EF IS zoom lens on the recommendation of the same Kim Morris who introduced me to the long lenses on the Canon L cameras. This lens worked quite well and became a favorite until I replaced it with the Canon 35-350 L.


I was literally like “a kid in a candy store” with this outfit. For the first time I was able to really reach out and get video footage. Where previously one had to hide in blinds to get subjects close enough, now larger animals such as deer and elk could be photographed at extremely long range so I was able to range over the countryside in search of wildlife and still get good detailed video footage.

One drawback was that the L2 required the use of a tripod in almost all cases. In time I came to realize that this applied to all camcorders as I became very aware and intolerant of shaky footage. However, with the L2 and the powerful lenses it was even difficult in some cases to get good footage with a tripod because of vibration.

When fall arrived I realized that I had to choose between my old methods of operation or I could leave the firearm at home and pursue the wildlife with the camera. When it came to the crucial test the camera won out, at least until deer season.

I did hunt deer that year, but a new way of looking at things was surfacing almost unbeknownst to me. I videotaped a nice nine-point several times in the fall of 1996. To my surprise I saw and recorded him that summer on a farm less than a mile from where I saw him in the fall. He was definitely the same buck, but he was now a large ten-point. When rutting season arrived he moved back into the area and I recorded him on numerous occasions. One day I realized that there was no way I would shoot him with the rifle if I saw him in deer season. Even though I had not encountered him at close range and he had not bonded with me, I now viewed him through different eyes and felt a bond with him. As luck would have it I did not encounter him and so was not put to the test, but I am certain that I would have let him live.

That was one factor, but another of equal importance was that this camera caused me to spend more time afield and to see animals doing things I had never witnessed before. I began to identify with them, and changed from observing and photographing them as possible targets of a hunt, to photographing the animals and interacting with them being the entire reason for being in the field. This may not have the excitement of putting an animal down with a bullet, but to me it had a much deeper satisfaction and I felt much better about things at the end of the day. As one gets older, they require less and less excitement anyway.

The following year I only took the rifle one day on a half-hearted walk into the mountain. I hunted one morning and evening with the muzzleloader and that was it. My gun hunting was over! 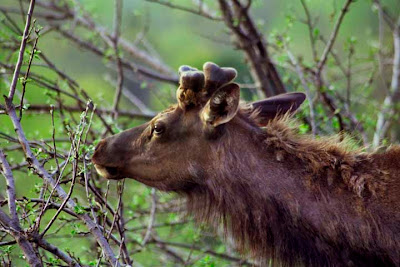 Young Bull Browsing In Spring: Althugh not taken with the L2, that camera was responsible for renewing my interest in still photography and I got the Minolta's back in service in 1999 and changed to Canon DSLRs in 1999.