I spent most of last week in Pennsylvania Elk Country with my primary objective being to film and photograph the shedding of the velvet from the bulls' antlers.  Many of the bulls had already shed by the time I arrived late Monday afternoon, but I found a bachelor group on Tuesday morning in which some of the bulls still had velvet.

This was a dark, overcast morning with a light shower of rain or two so the Canon 5D MK III and the 300mm f2.8 lens were the perfect choice for this situation.  This bull was in the edge of the woods along a meadow and most of the other bulls were feeding and horning bushes that were scattered throughout the meadow. While I took a few still images, I spent most of the time filming them on video with the Panasonic GH4 and Canon 100-400mm lens.

This is a 4K camera and I film in UHD mode.  With this one is able to capture 8 megapixel stills from the video.  Panasonic has a method for doing this, but I have not tried it.  I simply load the video into  my video editing program, Vegas Pro 13,  and scroll through the timeline until I find a suitable frame and then capture it.  Below are two stills captured in this manner that shows how the velvet cracks and bloody spots appear before the actual shedding occurs. 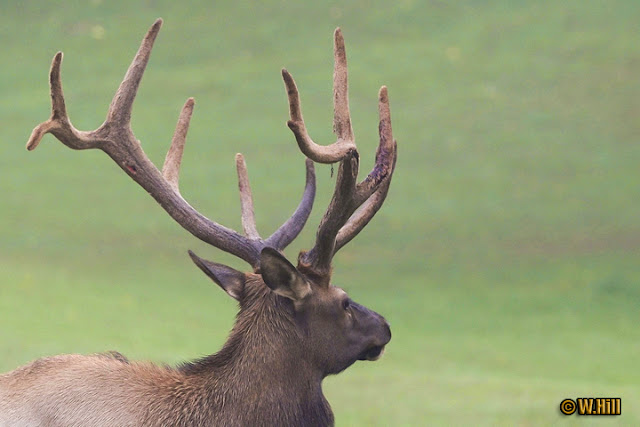 On Thursday morning I photographed two bulls that were feeding on apples.  The first photo shows how the velvet shedding process progresses from the stage depicted in the the photos above.


The second photo shows a bull that is completely shed and also documents how bulls dislodge apples from the trees by striking the branches with their antlers.

With the shedding of the velvet, the bulls begin sparring with other bulls and engaging in other pre-rut activity.  On this trip I did not get to photograph this activity , but I did get to see a mature bulls herding cows  late one evening as darkness fell in a remote wilderness meadow.

Originally published at Pennsylvania Wildlife Photographer by Willard Hill.
Posted by Willard at 9:09 AM 4 comments