An Important Milestone in Videomaking: The Canon L2

The Canon L Series Camcorders
In this segment of our series we take a close look at the Canon L2 camcorder. It may be dry reading for many, but it does explain why this model became so important to me, not to mention that it and Billie Cromwell were largely responsible for making the PGC Elk Video something more than just another wildlife agency video release.
Canon is known to most of us as a manufacturer of great still cameras, but it has also been a leader in the Prosumer camcorder field. With the introduction of the L series camcorders in the 1990s they put a powerful tool into the hands of the wildlife cameraman.
I have not been able to find the exact dates of production for these models, but the following is true.
The introduction of the L1 marked the first time an interchangeable lens camcorder was available at a price that was affordable for the serious videographer. After a time the L1 was replaced with the L2, which was cosmetically identical, but had an expanded array of digital effects and featured embedded time code.
Billie Cromwell purchased his in March 1995 and shot the elk rut that year with it, using the combination of the normal lens and a 2x extender that was especially made for this camera lens combination. The street price for this camera was in the $2,500.oo range so I didn’t consider it when I bought the Panasonic, which was about $1,000.00 cheaper.The Panasonic compared favorably to the L2 with its’ normal lens although it wasn’t quite as powerful, but I was soon to learn that the Canon was well worth the price difference.
The Canon featured a normal lens with a range of 8mm-120mm. That doesn’t sound like much, but in comparison to a 35mm camera that was 43mm-648mm, which is quite impressive. With the 2x multiplier it was 86mm-1296mm equivalent and that is not to be sneezed at. The only drawback was that it was slightly soft with the extender but it worked well under good light conditions. 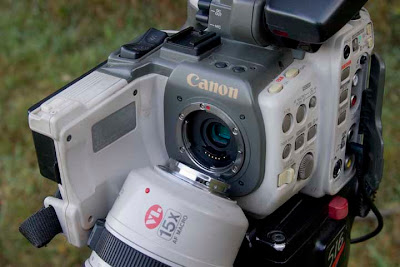 Canon L2 Showing lens mount and rear portion of normal lens
Things really got interesting when one attached a 35mm telephoto lens to it. This was done by means of an EOS adapter, which went between the camera body and the lens. The camera had a ½ “ sensor and one multiplied the stated focal length of a lens by a factor of 5.4 which made a 35-350 lens a 189mm-1,890mm equivalent.

Billie and I discussed this option quite a bit but the cost was intimidating. The EOS adapter was about $300.00 and a Canon L 35-250 was near $2,000. (This was still cheap compared to a professional rig, which could easily run $60,000 for a camera and lens. The Canon L1 and L2 did not match the performance of these cameras, but it did give one the same ability to shoot at long distance and the picture was good enough for broadcast and documentary purposes if one shot it right and transferred it to a professional format tape for distribution.)

We belonged to a video club at Sunrise Electronics in Chambersburg, Pa. One evening in the spring of 1996, a fellow club member, Kim Morris, showed up with a used L1, an EOS adapter and a 200-400mm Tamron Lens. He gave a demonstration of the equipment and showed footage that he had taken. I was stunned! This setup gave one the ability to record wildlife footage at extreme range!Billie did not attend the meeting so I called him and said something to the effect of,” Billie you just have to buy that adapter and a telephoto lens”. In time he did just that! I well recall the first footage he showed me. It was of deer feeding in the woods between 150-200 yards away and one could see the flies on them! L2 with 300mmF4 IS and EOS adapter
Billie used this outfit to tape wildlife for the rest of the year and the footage I saw was enlightening. It was unbelievable what one could do with this camera.
After this, I was very dissatisfied with the Panasonic and tried to purchase an L2 early the following spring, but to my dismay found they were discontinued. I wrote to Canon to see if they planned to introduce an upgraded version, but they refused to comment other than thanking me for my interest in Canon Products.
This led me to purchase a used L2, and the experience turned into a nightmare as it quickly developed a problem with the viewfinder and then with the tape transport. In time these difficulties were ironed out and it turned in respectable service until I replaced it with a mini-dv Canon XL-1s in 2002.

In the meantime Billie and I were about to have a lot of exciting encounters with wildlife which we would not have otherwise had!
To be continued:

The Making of Pennsylvania Elk: Reclaiming The Alleghenies

Part 1
For a time we shall digress from the issues surrounding Dr. Perk and the hunt and lay a more thorough ground work by discussing another important project of the mid to late 1990s.

The Pennsylvania Game Commission was in the process of developing a video on the elk herd when I made my first trip to the elk range in late February of 1995. It is unclear at what stage the project was in at this point.

My goal was to produce wildlife documentaries at some level, even if only for my enjoyment, but I did hope to achieve some level of public distribution. With that in mind I purchased a Panasonic AG-455Mup S/VHS camcorder, two Panasonic AG-970P editing VCRs and an edit controller. This was the industry standard for entry-level professional equipment. 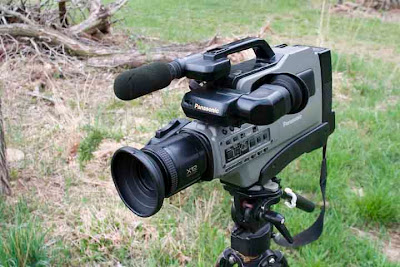 Panasonic AG-455MUP
Computers were just starting to break into the video editing field,but they were not yet a truly viable option, at least at the prosumer level. (Prosumer is a term used in the video industry which denotes an item that is more advanced and costly than that which the casual user possesses, but it is not so expensive that only large businesses can afford it). Wedding and event recordings are usually produced with this type of equipment, and it also used in independent documentary production.

If I remember correctly the PGC did acquire computerized editing equipment while the elk video was being completed, but it was not pressed into service in time for this project. Although based on the same technology their editing system was somewhat more advanced than what I was using.

One assembled the tape, using what natural sound that was desired as the scenes were assembled. They had the option of recording additional sound on a single track at a later date. When one started this process they had to read the narration and have any additional effects one wanted to add ready to play at the appropriate moment. It is an understatement to say that this was a difficult undertaking. The computer would shortly make this task much easier or at least much easier to plan and control.

Generation loss was the big enemy of quality with analog video. At a minimum one had to transfer the scenes they wished to utilize to a master tape, and then transfer the master to a VHS cassette for distribution, which meant that the final product was third generation and each generation resulted in quality loss . If one wanted to add the narration and music in stereo, another generation was used which resulted in additional loss. The end result was usually as good or somewhat better than the original recording from a consumer VHS camcorder.

When I returned from my September trip in 1995, I edited my first elk tape. It was quite primitive, but most were not used to seeing anything like it produced in a home studio.

My immediate law enforcement supervisor at the time was District Wildlife Conservation Officer, Mark Crowder. He was amazed at the video and took it along to a meeting at The Southcentral Regional Office in Huntingdon where the Regional Law Enforcement Supervisor, Ron Clouser, and the Superintendent of The Ross Leffler School of Conservation, Bill Hutson saw it and were impressed also. Mr. Clouser contacted me by telephone and indicated that while the PGC was in the process of making a lengthy video that it could be several years until it was completed. He and Mr. Hutson felt that a short video such as mine would be an excellent item to show to sportsmen’s clubs, civic organizations, in the meantime.

I submitted a copy with a signed release authorizing them to use the video for those purposes, but heard nothing more. Within the next year, the video production department of The PGC released a short video of twenty minutes or less to fulfill this need. I had to admit that it was superior to mine in every aspect.

No matter the quality of the work: however, there seems to be an ingrained attitude among some in the agency that, information and education people were hired to do this type of work and it was not appropriate for untrained maintenance workers and deputy conservation officers to develop and produce such programs for agency use.

There were a few notable exceptions, one being that all agency employees who were also photographers were invited to submit photographs for consideration for inclusion in the Game Commission calendar.

Another exception was that of my immediate Maintenance Supervisor, Billie Cromwell. Billie is nine years older than I, but we both began photographing wildlife about the same time frame, (early to mid-1970s) and continue to photograph together at times to this day. 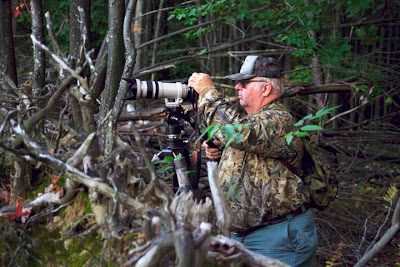 Billie Cromwell with film SLR and 35-350 lens: 1999
He purchased what was a superb prosumer camcorder for the time, the Canon L2.This was an interchangeable lens Hi-8 camcorder,which we will discuss in detail in the near future. 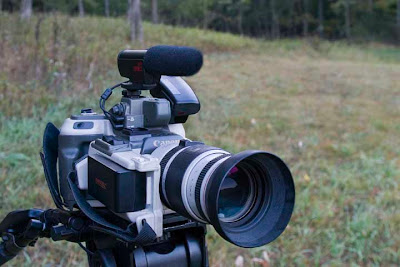 Billie worked out an agreement with the agency videographer, Harold (Hal) Korber and shot a large amount of the footage which was used, especially of the part about the rut, but this was to end in a great deal of controversy not the least of which was that someone high in the ranks of upper management did not want his name ( Billie's) mentioned anywhere on the video. When it was released it was included in the credits at the very end, and he did get to attend a banquet or so where he received a degree of public recognition for his contribution.