Being an obsessive-compulsive whitetail deer photographer, and with the whitetail rutting season in full swing, my main photographic subject is of course the whitetail deer. Last week Billie Cromwell and I were in Shenandoah National Park from dawn Monday morning until mid-day on Wednesday. It was a successful trip.

After sunrise on Tuesday morning we found a beautiful ten-point buck in the strip of grass between Skyline Drive and The Byrd Visitor Center. 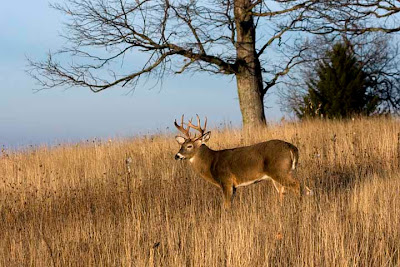 "Salty" and his wife were there for a morning photographic shoot and arrived at a point in time when the buck crossed into the meadow after a doe and then followed her back to his original spot. Salty arrived on the scene at this point and I captured the buck crossing the road between us. 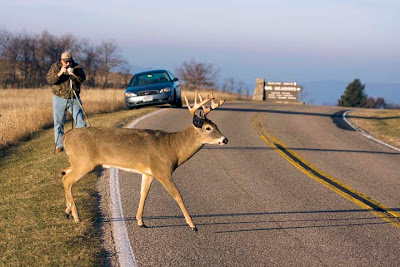 The buck remained in the area for some time before following the doe into the nearby woodlands. 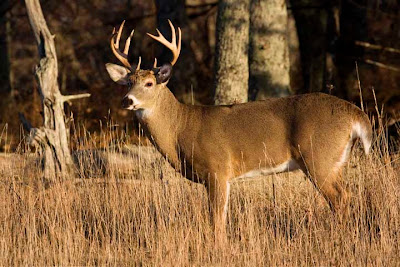 Here in Pennsylvania, whitetail buck photography will come to a screeching halt on the Monday after Thanksgiving week, which is the first day of a two-week rifle deer season. In our area both antlered and antlerless deer may be hunted with the appropriate tags, but in some parts of the state the season will be for bucks only until the first Saturday in December, at which time antlerless deer will be legal too.

There is no hunting in Shenandoah National Park so these bucks are safe unless they stray from the park, but private property is very close in many areas and it seems likely that many bucks are taken each year when they leave park land. In addition, poaching is a problem within the park, but a dedicated Ranger force keeps close watch.

The whitetail rut continues here in Pennsylvania. I expected activity to be very intense this week as a good shot of cold weather usually sends the rut into overdrive, but such has not been the case. I did manage to capture this small four-point on Sunday morning when he challenged a small spike quite near to my photographic outpost. I would have liked to have the entire rack in the photograph, but that was all I could get in with the 500mm F4 so it is obvious that the deer was very close. Notice the intimidating look in his eye and how his hair is fluffed. 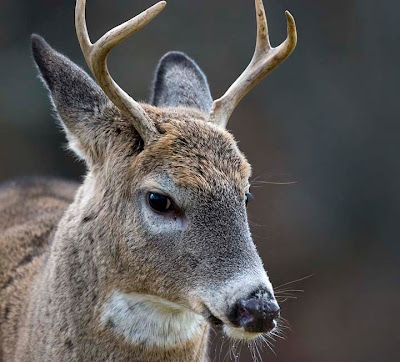 We had our first light snowfall of the season on Wednesday night, a minuscule amount actually, but that combined with a heavy frost made a stunning backdrop for this mature Eastern Wild Turkey Gobbler to pose against at sunrise on Tuesday morning. 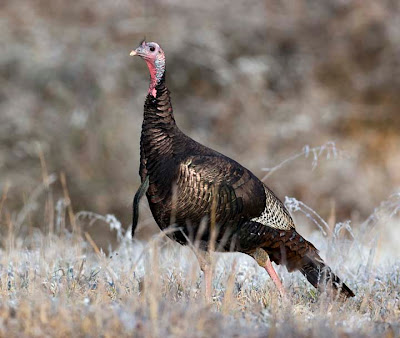 It has been in the low 20s in the mornings, but the wind chill factor makes it feel much worse. It seems that one is more likely to see wildlife once the sun hits the meadows in this type of weather.
Posted by Willard at 7:27 PM 11 comments