A Close Encounter With A Calf Elk

I encountered this calf on September 29, 2005 on Winslow Hill, near Benezette, Pennsylvania.

Like whitetail deer fawns, calves are spotted at birth but the spots are gone in most cases by mid-August to early September. This calf was completely changed to the winter coat.

This was another case of an animal that had no fear of humans. I was at a strategic spot, waiting for bull elk to appear, when this animal walked up to me. I had the camera attached to a 500mmF4 Canon lens which gave a good head and shoulders portrait at that distance. 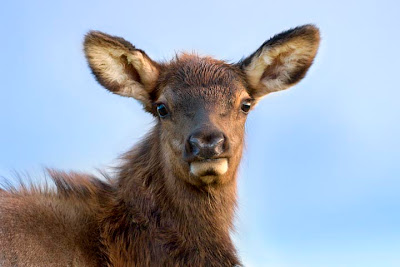 Be sure to visit Misty Dawn to view more Camera Critters photographs or participate!
Posted by Willard at 10:10 PM 28 comments 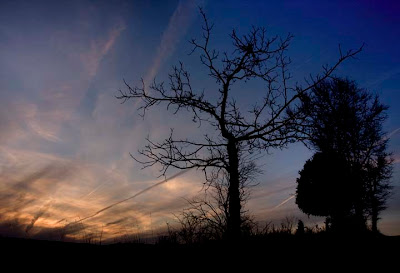 I finally decided it was time to upgrade from the 28-135mm Canon EF that I purchased shortly after I got my first digital SLR. While that lens is an excellent value for the price, it does not compare in construction quality to the Canon L telephotos that I am used to using and the image quality while good is nothing to be excited about.

Reviews indicated that is not the sharpest lens in Canon's arsenal, but that it does acceptably well especially if one uses unsharp mask in Photoshop. So far, I have found this to be true. All in all I am pleased with the lens and look forward to using it extensively.
Posted by Willard at 8:37 PM 27 comments 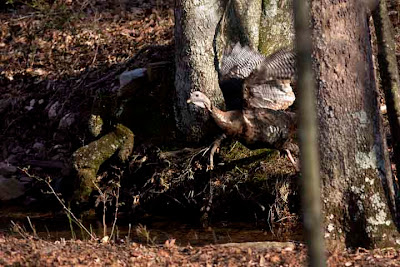 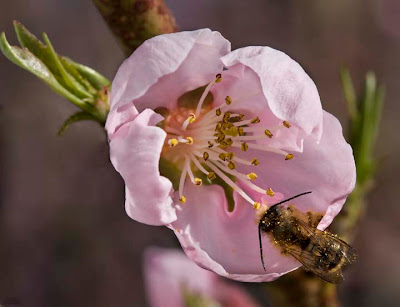 In this instance the subject was static and I was able to use a tripod to steady the camera and a reflector to assist in lighting the subject. It was windy, so I had to shoot between the gusts of wind.
Posted by Willard at 9:49 PM 12 comments

Early April usually brings a lot of gobbling activity in our area, but things have been slow this year. I usually encounter turkeys each day, but I have not gotten any good still shots of them gobbling or strutting. I am mostly seeing young gobblers also known as "Jakes". Two large gobblers showed up frequently until lately, but they are elsewhere now. I did record one gobbling with the Canon XL-H1 as it passed through a nearby meadow and have recorded some spectacular footage of turkeys fighting which I hope to post as video clips in the near future.

Since I have had such poor luck lately, I decided to dip into the archives and post two shots from a close encounter with mature gobblers from April 8, 2007. Turkeys are more likely to gobble in early morning or in late afternoon and evening.

In this instance a flock of two or more mature gobblers, Jakes, and hens came in front of my blind at 8:37 in the morning. Since the birds were in the woods I was only able to get an exposure of 1/90 sec. F4 at ISO 200.

I had stated in an earlier post or comment that I have never been able to actually capture a gobbler in full gobble, but I later recalled this shot. I still am not happy with it. For a picture such as this to be successful, it has to make one literally "see the sound" which is difficult to do and I am not sure that this is entirely successful from this standpoint. 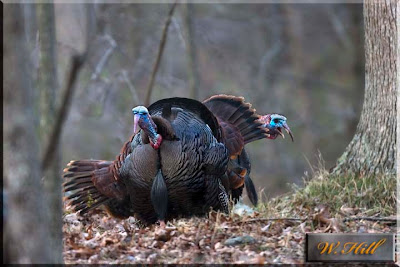 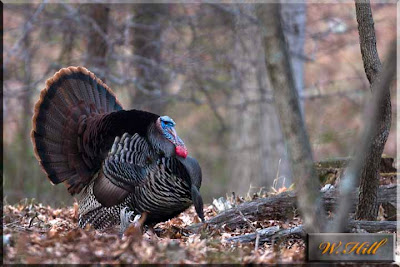 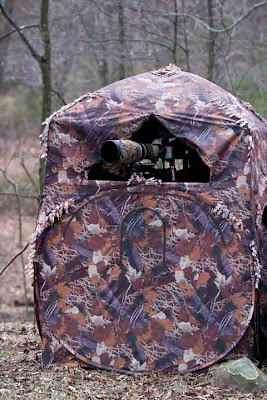 I was hidden in the blind shown above and used the 500mm F4 which may be seen attached to the Canon XL-H1 camcorder in this instance-although the photos in the post were taken with the 10-D.
Posted by Willard at 8:15 PM 9 comments