The Elk Expo will be held this coming weekend at The Elk Country Visitor Center on  August 16th and 17th.  Numerous vendors are featured selling a wide variety of outdoor related  products.There is a full schedule of events including  wildlife oriented educational programs, elk and turkey calling contests, the elk license drawing. musical groups and other events.

Be sure to visit The Elk Expo website for full details.  An important point to remember is that parking at the Visitor Center is  limited and will be given first to vehicles with handicap parking require-ments. All other vehicles will be directed to parking at the Benezette Community Center from which  two shuttles will run  to and from the Visitor Center all day.  There is a $3/car fee for parking and bus service to defray the cost of transportation. This service received little use last year as attendance did not meet expectations and most if not all parking was handled by the Visitor Center parking facilities. Attendance may be up this year so visitors should consider the possibility they will need to utilize the service.


Benezett Store To Have Booth At Expo

Benezett Store will once again maintain a booth at The Expo featuring many items including caps, sweat shirts, books, and videos.

Among the items to be on sale is a photo book, "Elk Scenic Drive" by Marci Geise and a book released last year, "Pennsylvania Elk" which was edited by Marci Geise and features photos by Ms. Geise along with several by well known Pennsylvania elk photographers including, David Anderson, Jim Borden, Richard Coy, Tom Dorsey, Coy Hill, Willard Hill, Ronald Saffer and Paul Staniszewski).
Click the following links for more information of these books:
Elk Scenic Drive
Pennsylvania Elk


Elk Films to be available at Benezett Store Booth at Expo and at Benezett Store
I have released two documentary films about Pennsylvania's elk herd. "Running Wild In Pennsylvania Elk Country is a 2012 film that gives  a detailed look at the life cycle of the elk as well as providing  a close look at what other species of wildlife commonly seen in the elk range such as whitetail deer and eastern wild turkey are doing as well. 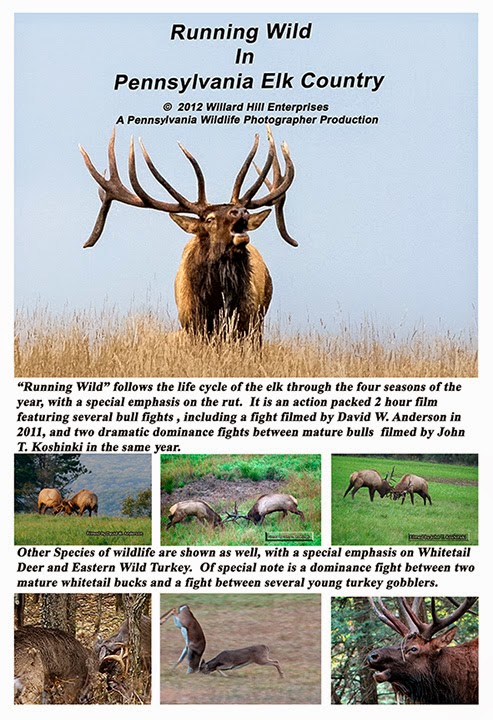 Also of special note is a violent fight between mature whitetail bucks that I filmed in 2002.  There is a segment on Bull 36. a.k.a "Fred Jr."and  Dogrope" which features segments of a dramatic fight between this bull and a large 6x6 in 200.  This was before the bull was captured and collared.  This is the same bull fight which is featured at present in the Elk Country Visitor Center presentation, but it is edited differently so it is not a duplicate of the show at the center.

This film is dedicated to elk restoration pioneer, Ralph Harrison. It shows a year in the life cycle of the elk with a focus on the rut, and  also discusses many of the controversies surrounding elk management today. It features a cover photo of Bull 36 in 2002, taken by Ronald Saffer, which was two years before he was fitted with a collar.

Click the following links for more information on these films.
"The Truth About Pennsylvania's Elk Herd"
"Running Wild In Pennsylvania Elk Country"

For those who would like to see a sample before buying, they will not likely have a player at the booth at the Expo, but they should be playing the films at the store and restaurant.  If not ask them if they will play you a sample.

I will not be at the Expo this year, but still encourage you to visit and support Benezett Store and the other vendors.

Whitetail photography and deer watching in the Big Meadows Area of Shenandoah National park was destroyed in 2012 by the implementation of a whitetail deer study which resulted in the mature bucks at Big Meadows being fitted with radio collars or ear tags and seems to have resulted in a significant reduction in the whitetail population. I had not been to SNP since November of that year after I left in disgust on the first morning of what was scheduled to be a multi-day trip.

After  almost two years of avoiding the park, I decided to check in on the whitetail situation at SNP once again.  As a result, on a late July morning I left home in the wee hours of the morning so I would arrive in the central district of the park at dawn. As I traveled down I-81 my thoughts wandered back through the years and I recalled the countless times I made this trip with visions of herds of deer and large rack bucks grazing in the beautiful summer morning running through my head and how that  more often than not the trip met or exceeded my expectations.  I knew things would be different this year, but it was nice to pretend that the events of the last few years had not taken place.  If one had any doubts as to whether the situation was not as bad as expected, it did not take long to dispel them.  I saw not one deer by the roadside as I traveled  Skyline Drive from Thornton Gap to Big Meadows as dawn was breaking.   I arrived at Big Meadows to be greeted by a beautiful but unusual sunrise.

Only a handful of deer were scattered about in the meadow, none of which were bucks, so I made the loop to below Milam Gap.  An eight-point was grazing along the road before the Milam Gap parking lot, and it was fitted with a collar that had worn most of the hair from the neck.

After taking a few photographs, I returned to the meadow where a small herd of deer was now visible in the distance. Three were respectable bucks, but all were wearing collars.  I decided to work these animals and walked into the meadow and took position in a spot it seemed likely they would pass through.  In a few minutes the herd arrived minus one of the bucks, which evidently split off to go elsewhere.  Two bucks were in the lead and for a few moments it seemed like the old days as one could see the tips of the velvet covered antlers bobbing above the bushes and grasses. One almost expected a buck such as this to appear and he did, but there was one big problem.


The photograph below shows what he really looks like.

Photographers will argue the ethics of such matters, but it is easy to remove collars and ear tags in Photoshop or similar programs if the collars are relatively small and the neck hair is undamaged, but this is not the case with the Shenandoah deer where the collars are huge in proportion to the animal and the hair is usually damaged.  In this situation there was not enough hair available to clone over the collar so a neck was used from another buck in  photographed in 2011, which was standing in a somewhat similar position.  It would be unethical to enhance the damage to a deer's neck, but  I see nothing wrong with  removing something that should not be there in the first place. However, at this point in life, I have little interest in doing so as it is difficult and one still is left with the unpleasant memory of how the situation actually was.


The second buck was worse yet, as most of the hair was missing from the neck.


A mature doe was feeding with the bucks and she too was wearing a collar.

Each of the deer that was collared also had a small tag in the right ear, which is visible in the last two pictures.

It seems at this point that the battle is lost with little hope for the future.  The National Park Service has been granted a finding of FONSI (Finding Of No Significant Impact), which as I understand it, gives them the go ahead to implement their plans.  http://www.nps.gov/shen/parknews/shenandoah-national-park-completes-cwd-detection-and-assessment-plan.htm .  I found a good definition of "FONSI" on a Department of Energy Page: "Findings of No Significant Impact are public documents issued by a Federal agency briefly presenting the reasons why an action for which the agency has prepared an environmental assessment will not have a significant effect on the human environment and, therefore, will not require preparation of an environmental impact statement. http://energy.gov/nepa/findings-no-significant-impact-fonsi  They are perhaps right that the collars, ear tags, neck injury, and herd reductions means nothing to the average visitor to SNP,  but to the whitetail deer and those that are interested in them, the impact is significant and severe.

Originally published at Pennsylvania Wildlife Photographer by Willard Hill.
Posted by Willard at 11:50 AM 4 comments