A Spring Morning On Winslow Hill-Elk In Velvet 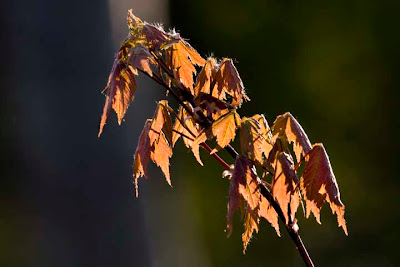 Maple Leaves: Canon 40-D- 500mmF4 1/60 sec.- f 11 ISO 200
Early May and Pennsylvania’s Northwoods is bursting with life, as the tender new leaves appear. At this time the two major events in the life cycle of the elk are the growth of the new antlers and the shedding of the winter coat. Last years rack is ordinarily shed in a period ranging from early March to late April, with the larger bulls losing the antlers first. It is common to see them with substantial new growth while many of the younger bulls have not yet shed.

I consider this to be the best photograph of a bull from my recent early May excursion to Winslow Hill as I found him in a woodland setting and he was illuminated by beautiful, early morning sunshine. This animal has the potential to grow an exceptional rack!

The thin, reddish hair of the summer coat replaces the winter coat. This process happens over a long period of time and the elk is disheveled or ragged looking until shedding is complete. 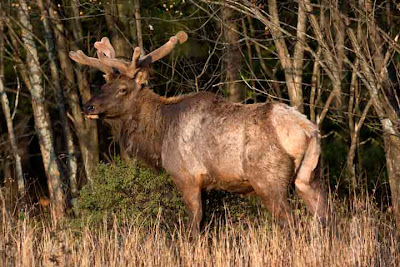 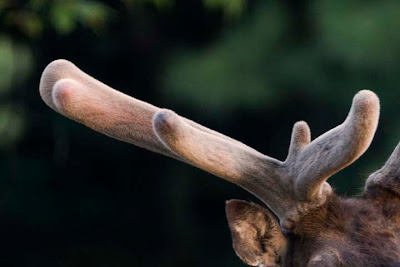 Velvet Covered Antler: Canon 40D-500mmF4 1/180 sec.-f 4 ISO 400
The antlers are covered with a network of tissue and blood vessels that is soft and fuzzy to the touch and reminds one of velvet cloth; hence the descriptive name “velvet”. This supplies nourishment to the growing antlers. This is the difference between horns and antlers. Horns receive nourishment from the core, while antlers receive it from the covering. An antlered animal in this stage of development is known as “being in velvet”. Elk shed the velvet in early to mid-August, after antler growth is complete.

Each year since 1995 I have traveled to Pennsylvania’s elk range, to record and photograph the action at this most exciting time of year. I retired at the end of June last year. As a result I was able to spend two weeks at the end of September pursuing the elk.

At the end of my first week there, I received an invitation to attend a slide show at Ronald J. "Buckweat” Saffer and Odie’s Swartz’s campsite.

Shortly after darkness fell on Saturday evening, groups of people drifted in with their camp chairs and formed a semi-circle around one side of Odie’s camper where a projection screen was erected. This was much like the old fashioned slide show, except that the pictures were not slides in a Kodak Carousel projector but rather digital files on a computer connected to a digital projector.

At the end of the screening, I felt a great sense of loss. To those who think things are better in Pennsylvania Elk Country today than at any time in the past, I respond that you didn’t see this presentation. If a young man set out today with a DSLR and a suitable battery of professional lenses, he would face a daunting task in assembling a body of work of this depth and quality. In addition, based on my recent experience, the opportunity to photograph some of the activity shown is not here today.

I will not argue with anyone who contends that there are still some large bulls and that some of them are in remote, wild country. There are likely as many elk and quite possibly as many or more bulls on Winslow Hill as in the past, but there is not the number of “quality” bulls that there were a few short years ago.

Some shots that stand out in my mind are those of elk herds crossing the river with several large bulls in velvet together in one shot. I seriously doubt that this can be duplicated today.

Is it really better that these opportunities are greatly diminished or gone to be replaced by an elk hunting industry that only a relative few will ever experience? 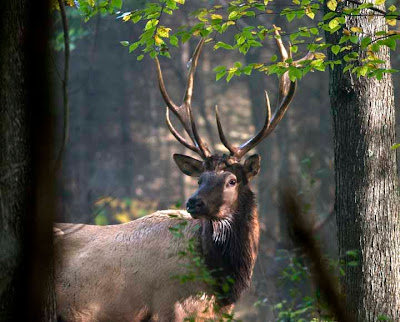 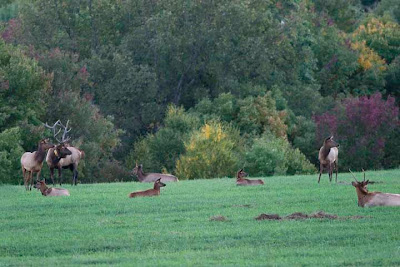 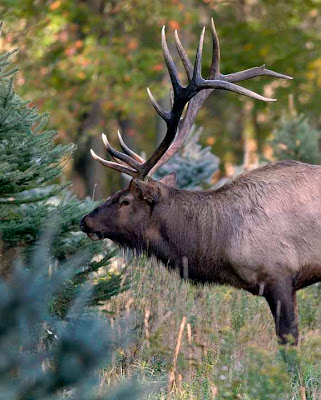 Mature Bull: Canon 10-D 300mmF4: 1/90 sec. F4 ISO 200 . Not as large as they come in Pennsylvania, but this animal has great potential to become an outstanding bull if he survives!

If anyone is inclined to argue, I heard first hand the speculation among officers and the general public as to what quality of racks that were going to be taken in the first hunt because there had not been a hunt in 70 years, speculation as to what trophy fees a landowner would be able to charge to permit an outstanding animal to be taken on his land. I saw first hand the “kid waiting to get in the candy store” mentality.

Few expected that quality level of animal to be present in large numbers after a few years of hunting, yet at the same time we were promised that the herd would be managed to maintain a large number of mature, branch-antlered bulls. It all boils down to what we consider “large branch antlered bulls”.


I recently viewed some video footage from the 2007 hunt and the shooter comments how large Pennsylvania bulls are compared to western bulls, this while showing small to medium size bulls walking about in a food plot and several extremely small bulls in a wooded area. It seems we were willing to sacrifice the extraordinary, and settle for second or third class!
Posted by Willard at 11:16 AM 8 comments 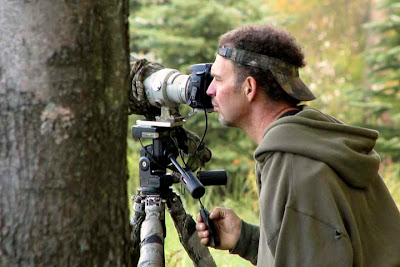 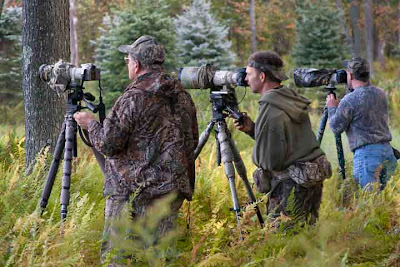 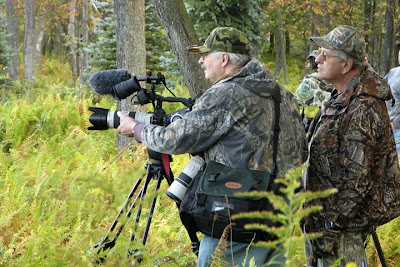 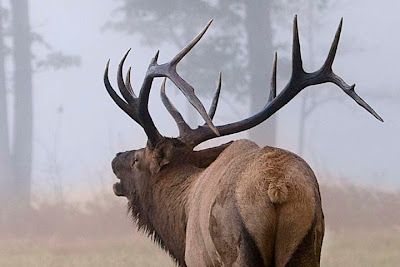