During August, most visitors to elk country may be focused on the bulls and the shedding of the velvet and the first stirrings of the pre-rut, but other important changes are occurring in the herd as well.  Like whitetail fawns, the calves are spotted at birth, which creates a camouflage pattern that helps them escape predators, but the spots start to fade in late July and this process continues until the coat is a solid color. The process begins at the top of the back and gradually works down.  By mid-August most of the calves are only partially changed such as the one in the photo above, but a small number have only a few spots still faintly visible. By the time the rut peaks in mid to late September most of the calves will have completely lost the spots or will have only a few faint ones.

This is the second trip to elk country that I have used the Panasonic GH2 as my primary video camera.  I was very unhappy when Canon did not include  the 3x crop mode in the 5D MK II or the new Rebel T4i.  I have no personal experience with The T4i, but I am told that the it does not have a better picture quality than the T3i.  I do have a fair amount of experience with the MK III in video mode and it is significantly better than the T3i in either still or video mode.  I am very happy with it when one can get close enough to the subject, but I missed the reach of the old Canon XL-H1 and the big L lenses, so after extensive research, I decided to try the Panasonic GH2 hybrid camera.

The GH2  uses a micro-4/3 lens mount and the sensor has a 2x crop factor.  The camera also has an extended telephoto mode, which takes the 2mp of resolution required for video from a small central portion of the sensor. This is how one can "really reach out and touch them" in video mode.  A decided down factor to this equation is that to use the Canon mount glass, one must use an adapter, and one that will electronically control the aperture costs almost as much, or more than the camera body--depending on which particular adapter one buys.  The bottom line; however,  is that the 500mm F4 , which is just that on a MK III becomes a 1,000mm F4 equivalent focal length on the GH2.  This is true in either still or video mode.  It becomes a 2,000mm focal length equivalent  in video mode when the extended telephoto mode is engaged.  The image is degraded somewhat , but it is still very usable.  I understand that unlike the T3i, one can also use this mode while shooting stills, but it will no longer utilize the full resolution of the sensor and as this is primarily a video camera in my case, I have not tried this yet.

Although one may not be able to tell from images posted on the internet, the bottom line is the GH2 cannot compete with any of the later Canon DSLRs as a still camera, but it is very usable and when one is concentrating on video it is an acceptable option to switch to still mode and take photographs.  Stills captured from video after the fact will be only 2MP resolution and will not be nearly as good as stills actually shot in still mode.

A decided plus for the GH2 is that this is the first DSLR with which I have been able to follow-focus on moving animals or birds, in video mode, with any degree of success .So far manual focus  must be used in filming with a DSLR to have any hope of success and the LCDs are simply too low in resolution to reliably maintain sharp focus on moving subjects, even with the Zacuto Finder attached(the Rebel T3i did work better in this aspect than anything I had used previously).   The GH2 works better, because it has a blistering sharp electronic view finder in addition to a decent LCD.  I prefer to shoot video with the camera slightly above waist level and the LCD swiveled out and at a 45 degree angle, so I am standing above the camera, looking, down, and bent slightly forward.  This often gives a better perspective on the subject than standing erect, and using the eye-level finer, and it  is a good position to follow action from as one's head is not bumping the camera to disturb smooth camera motion, but the downside is of course the focus thing.  I find I am using the eye-level finder on this camera more and more, simply because I no longer have so much problem focusing.

The bottom line is that one needs to keep an open mind about some of the options out there with the new high end Canon video cameras costing $16,000.00 without lens. 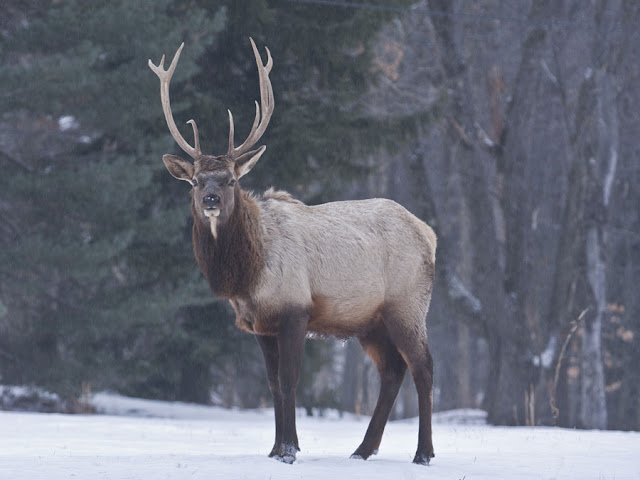 A photograph by Paul Staniszewki was selected by CNB Bank, as the featured photograph for February, in their 2013 calendar. The bank conducted a photo competition, with the top contenders being selected for the calendar. 20,000 calendars will be printed.

Staniszewski, a retired educator, is currently pursuing a career in outdoor photography. He specializes in flower and Pennsylvania elk photography. He exhibits at the Winkler Gallery of Fine Art in DuBois, and his work is available for sale in several locations including the gift shop at the Elk Country Visitor Center.

I have spent most of the summer filming wildlife in the mornings and evenings, and editing the new Pennsylvania elk film in the mid-part of the day and after dark.  In addition I have spent about one week each month since June, documenting the elk herd, so last  week I traveled to elk country to document the shedding of the velvet and the fading of the spots on the calves.  The bulls begin to shed the velvet in early August, but the timing of the process does seem to vary somewhat from year to year.  In general it is safe to say that the peak of shedding activity occurs about the middle of the month.  As it turned out I was a bit late to record the beginning of the process on the mature bulls.

I saw one mature bull known among the elk watching circle as "Attitude" on Tuesday evening, but he was feeding near a cabin and in such a situation that I did not feel comfortable photographing him so I passed on the situation.

The following morning I found him along Winslow Hill Road and did get a few photographs of him, along with several video clips of him rubbing his antlers on trees and bushes.

That evening I encountered two bulls that are frequently seen working the north end of Winslow Hill along Winslow Hill Road.  I had checked repeatedly for them, throughout the evening, but they did not arrive in the meadow until almost dark.  The largest bull remained at a distance and was partially obscured by vegetation so I concentrated on the smaller 6x6.  In this case the low light capability of the 5D MK III really paid off as I used an ISO of 10,000 and I am very pleased with the results.

I turn off all in camera noise reduction and then use either the Noise Ninja plug-in or the noise reduction tools included in Adobe CS6 Camera Raw Processor.  In my experience Noise Ninja does quite well until I start dealing with the higher ISOs.  I need more experience to determine the exact point, but at present I usually use noise Ninja as my tool of first resort for speeds up to 1,000,   Beyond that I try Noise Ninja first and then turn to the Photoshop tools  if I am not pleased with the results.  It seems that beyond a certain point with Noise Ninja that I either have too much noise remaining or end up with a plastic looking result.

Originally published at Pennsylvania Wildlife Photographer by Willard Hill.
Posted by Willard at 10:37 AM 6 comments