Many have mentioned that it is difficult to tell dandelion and coltsfoot apart. Today I had the opportunity to document both plants. I made no effort to try for exceptional composition or lighting. The sole purpose was to demonstrate the differences in the plants.


Coltsfoot is one of the earliest blooming flowers in our area. When it first comes up there are no leaves visible, just the stalk with a flower on the end. Look closely at the stalk and notice that it is not smooth. Later the clusters of large leaves appear around the base of the plant. These usually appear late in the blooming cycle of the plant or after the flower has vanished. 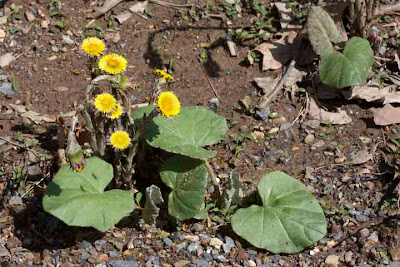 Dandelion has smooth stalks and elongated serrated leaves. The flower resembles the coltsfoot at a casual glance, but close inspection reveals a substantial difference. Dandelion begins blooming about the time that the coltsfoot blooms are in decline. 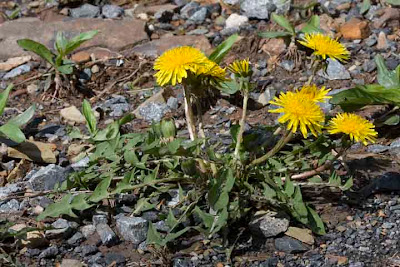 An Ordinary Day Has An Exciting Conclusion!

Ordinarily it is only a five minute drive to my favorite photography spot, but there is a stream crossing or "fording" and after heavy rains it is often too high for the Chevy Blazer. To reach the spot without fording the stream involves a 20 minute drive over a mountainous back road. If one makes this drive to photograph both the morning and evenings activity, gasoline consumption skyrockets. While the Blazer can give 20-21 mpg. on interstate driving, it drops to 10mpg. or slightly more on this type of road.
I drove this morning and set up both the video and still cameras. I saw several turkeys, but there was no exciting action. Since it was a pleasant evening, staying home was not an option.With the price of gasoline at record levels it was time for drastic action!

It is only one mile from my home to our farm, so I drove there and then commandeered our old International 584 farm tractor. The big problem was transporting the equipment safely. I had to choose between still or video equipment and I decided to take the DSLR with 500mm lens. 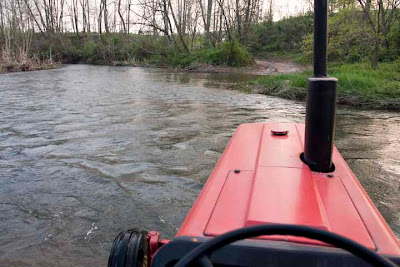 I arrived at my blind without incident, and soon a large gobbler came from the woods and fed in a newly planted food plot. This continued for over an hour and then he became excited about something, ran into a grass strip near the food plot, puffed his feathers out, and strutted. 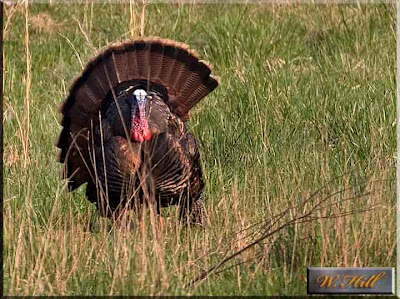 Canon 40-D 500mmF4 1/750 sec. f4.5 ISO 200
He began running along the edge of the woods and I was surprised to see another mature gobbler running toward him as there had been no gobbling whatsoever. They came together, circled briefly and then a short terrific fight ensued. 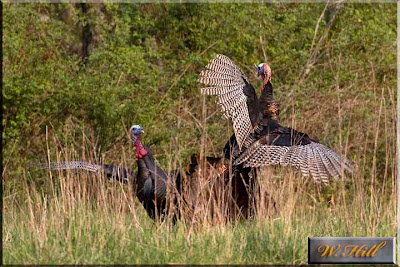 The victor returned to the meadow while the vanquished bird stood nearby in the woodland. 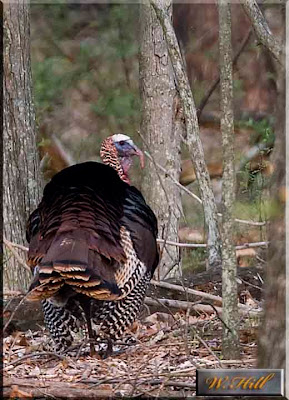 Like so many days afield, much of the time was uneventful, but that all changed in a few minutes and a beautiful spring day ended in a rewarding encounter.

Hopefully the stream will drop enough in a day or so, that I can return to using the Blazer full time!
Posted by Willard at 9:26 PM 15 comments