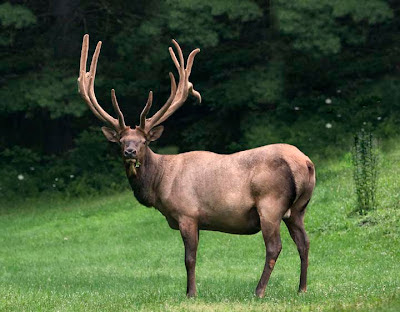 The village of Benezette, Elk County, is located along the banks of Bennett's Branch of Sinnemahoning Creek or River. It is in the core of Pennsylvania's traditional elk range and as such it is not uncommon to see elk in town. For whatever reason, they are mostly bulls, although I have seen cows on occasion.

The elk are usually seen in early morning, or late evening. On the morning of July 22nd, I took a quick trip around top as day was breaking. Fred, also known as Bull No. 36 was already leaving, but I found another bull feeding in a nearby lawn. This bull is quite a bit younger than Fred, but he is getting larger each year, while Fred is now declining from old age.

This bull is already an impressive animal, but he has the potential to get quite a bit larger if he remains in the no hunt zone during season, or does not otherwise meet with harm.

I used ISO 1600 to get a usable shutter speed, as it was still very dark. 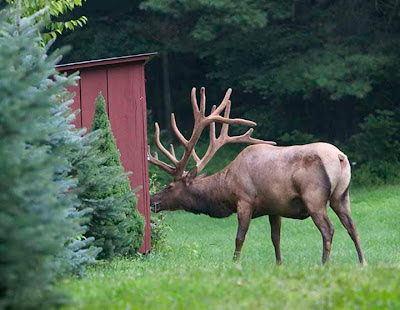 I was a little later than usual heading out to look for deer on Sunday morning. Shortly after dawn I was driving down a narrow, winding back road when I say a hawk come fluttering to the ground through the forest canopy, and grab an unfortunate rabbit.

I stopped immediately. Ordinarily these bird fly from the near presence of a vehicle, but this one was determined to not leave his prey. I took some shots through the windshield of the vehicle, but they were not sharp.

Could I possibly get out of the vehicle and have clear shooting? Nothing ventured, nothing gained as the saying goes, so I made sure the camera was set properly and slowly edged the door open and then slid into the v between the door and the Blazer body and began shooting.

I would have liked to have been closer, but there was no way to do so. I cropped the photographs severely to get a reasonably close looking image.

Unbelievably I was also able to get the video tripod from the rear of the vehicle, attach the XL-H1 and get it in action. For a time I let it run while I fired stills with the DSLR. 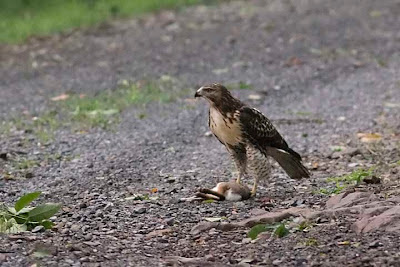 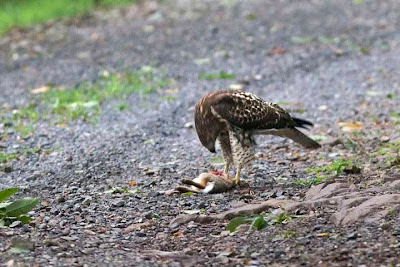 
The hawk fed on the rabbit until it had consumed enough of it that it was able to fly with the remainder and then went airborne, carrying it away.

One of the most memorable outdoor experiences I have witnessed was over.

These photographs support my answer to a question in a previous post as to why I thought there is a low rabbit population in our area.
Posted by Willard at 9:32 PM 14 comments