Camera Critters: Close And Personal With A Whitetail Fawn

On June 15th, I posted a close-up of a fawn before I left for a trip to Elk County. At that time I promised to give more details about this, but then of course photos from the Elk County trip were fresh on my mind and I have not told the story of the fawn. It seems that I am getting very good at promising more photos and information, about a subject and then moving on without addressing it in more detail.

I noticed that my favorite whitetail doe was still extremely pregnant when she visited the food plot on Saturday Morning June 13th. As I drove in the lane that evening I saw her go around the corner of an old house foundation in a "sneaking run". As she usually stands alert watching me arrive, or approaches the vehicle, I was almost certain that the long expected event had occurred.

I got on watch by the food plot and soon she arrived. Yes, her flanks were now sunken, indicating that she had given birth. 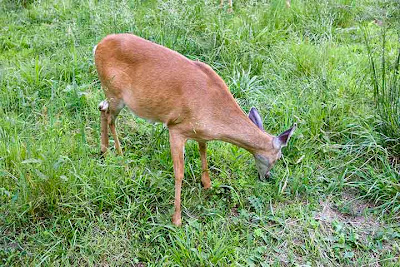 Sunken flanks: Abdomen still looks enlarged, but that is from stretching

I realized that the fawn was probably near the old house foundation so I took the camcorder on the tripod and the 30-D with 70-200mm 2.8 lens and went in search of it. I ordinarily would not recommend this course of action, but this is a very unique situation. These deer are completely acclimated to me and were not frightened by any of what is described here. In fact this particular doe will often fall in with me when I am walking in the area and follow to the side or slightly behind me. In this instance she soon followed me, a short distance behind, stopping to browse.


I stood still for a time when I reached the foundation and then was distracted by two bucks passing by and photographed them. When I looked back the doe was gone, but soon I noticed her walking a roadway some distance away. I followed at quite a distance. Soon she went into the woods and then doubled back toward the foundation. I slowly retraced my steps and started in the lane on foot. The doe walked into the lane and then looked back into the woodland. I positioned the video camera and began filming. Then the moment I had been waiting for arrived-the fawn stepped from the bushes, and the doe began grooming and nursing it. 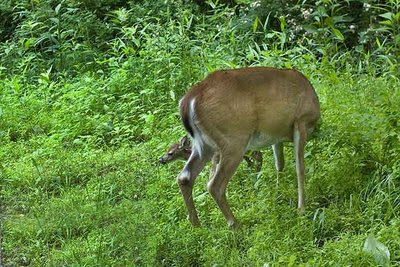 I See The Fawn At Last
I decided to drop the tripod as low to the ground as possible to get a different perspective and suddenly the fawn spied me and began staggering toward me. A tripod was too unwieldy for this, so I dismounted the camcorder from it and engaged the image stabilization. Suddenly the fawn was under the tripod and then it was nuzzling my knee. At one point in time I rested the rear of the camcorder on the ground and fired up at the fawn with the lens on extreme wide angle. At times I placed the camcorder of the ground and took stills with the 17-40mm, but the light was so low that it was difficult to get sharp photos. 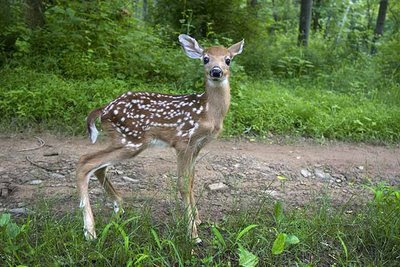 This Is Close: probably 2-3'
At one point the young animal even sniffed the camcorders' microphone. 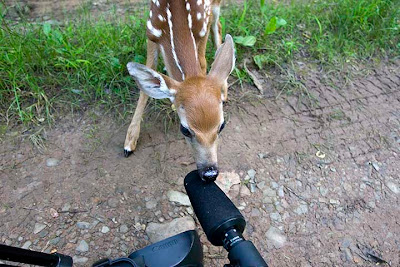 The Young Are Inquisitive
In time the fawn rejoined the doe and they went into the nearby woodland where they interacted for quite some time, before it bedded down in a thicket. 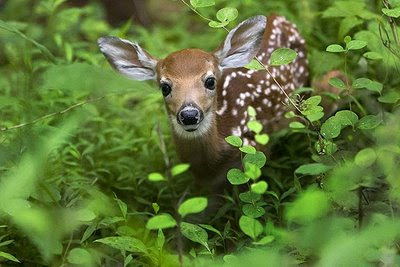 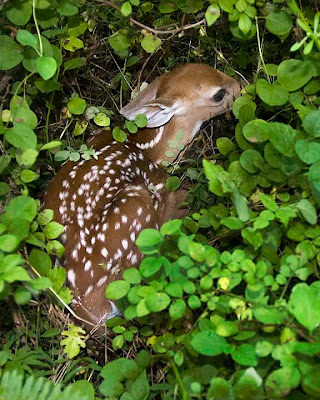 It is likely that this doe has two fawns, but only time will tell. The fawns should start traveling with the doe during July and then one gets a better handle as to what actually occurred during the past birthing season.

For more Camera Critters, Click Here!
Posted by Willard at 9:35 AM 23 comments

"Fred-"Bull 36: Some Thoughts On Wildlife Photography

It seems that one is always looking for that super, award winning shot and may be disappointed with a day afield if such an opportunity does not present itself. I know I am always looking for such photographs and video footage, yet if we concentrate on that to too great of a degree we may miss a certain type of shot that is valuable in its' own way. 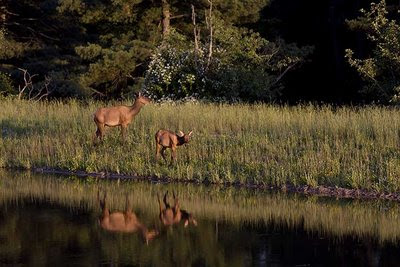 Elk In "Natural" Setting: actually part of a reclaimed area
I seldom used to photograph or film the elk in town, except when I wanted footage documenting that situation. I have come to photograph these animals more and more as I find that it documents a different aspect of Pennsylvania's Elk Range, and the town of Benezette in particular. While I ordinarily think of foot trips in the backcountry when visualizing elk photography, this is not what most tourists do. The photographs featured today are actually more representative of what they may encounter-along with roadside encounters on Winslow Hill Road and Route 555.

Low Light Levels and a lot of distracting objects usually define this type of photography. All of the photographs featured today(except for the elk in bright sunlight by the pond) were taken at ISO 1600 with the 70-200mm f2.8 IS,. The highest shutter speed used was 1/60 and the lowest was 1/15. As much as I firmly believe in tripods, I do not usually set one up in town, as I do not wish to create a spectacle, or impede traffic. These were shot out of the vehicle window, resting the rig on the windowsill.

Fred is of course the famous Benezette town bull that I have featured in many posts before. He is a favorite of many Pennsylvania elk watchers and many travel to the area to check on "Freddie". 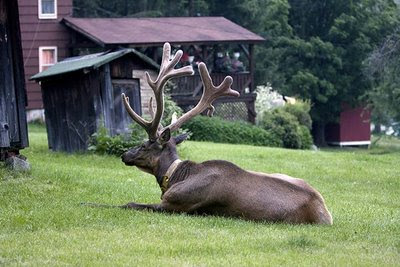 
Sometimes it works well to shoot the animal as one finds it, but trying different angles may result in being able to isolate it against a pleasing backdrop. (I am not too fond of the position of the elk in the shot below, but I do like the rustic building as a background) 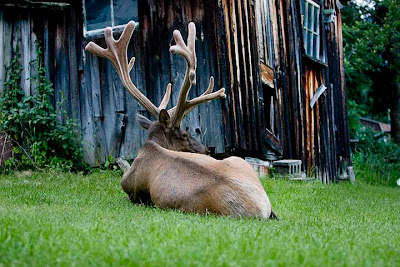 
Sometimes the animals are positioned so that one may take a photograph that looks as though it were taken in the wilderness. There were buildings on both sides and objects in front of the animal below, but I was able to get a natural looking portrait by zooming in to 185mm. 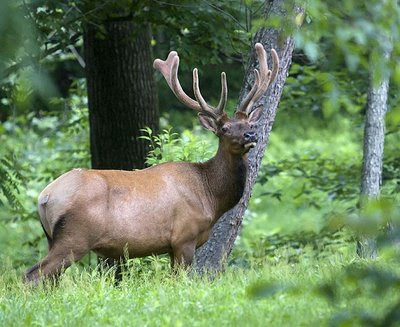 
Photographers should remember to respect private property and not walk in lawns, or block traffic.
Posted by Willard at 8:53 AM 12 comments