I have seen Eastern Wild Turkey gobblers almost daily for the past few weeks. While the birds mostly cruise the meadows and woodlands in search of food, they do sometimes engage in some very interesting behavior. In this case two mature gobblers engaged in a fight last Saturday morning, which lasted about 19 minutes. I have seldom seen an encounter as intense as this one. Coy of Country Captures was photographing with me and documented the incident in much greater depth with still images than I did, as I was shooting video. Please visit his blog for a series of posts, which documents this amazing encounter.

I have seen the birds fly at each other and fight by "flogging", on several occasions, but this encounter was much more like a wrestling match, with the birds using their beaks to gain strategic holds, and entwining the necks together to exert leverage on each other.

I did take a few still photographs while the turkeys were locked together and this is a tightly cropped portion of one of the better ones, which shows how they can grasp another birds head. 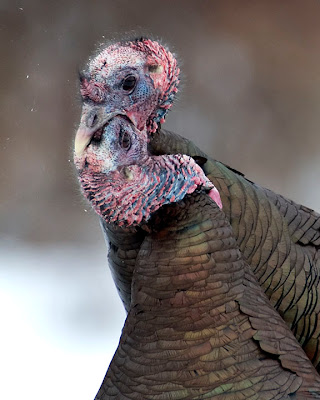 
The specks of snow in the photograph are from the bird's feet scuffling about in the snow cover during the struggle.

" Winter with it's now and cold. Survival is difficult for wildlife and human's alike."-opening dialog from "Winter A Struggle For Survival".

With it being one of the most brutal winters in recent memory and shooting video with DSLRS being one of the current "in" things to do, I decided to put together a short film from clips shot entirely with the Canon 7-D.

Winter: A Struggle For Survival from Willard C. Hill on Vimeo.

The film features winter birds, elk, and whitetail deer set against a backdrop of winter storms interspersed with sparkling clear days.
Posted by Willard at 5:14 AM 10 comments

With an increasing number of DSLRs having the ability to shoot HD video, many are turning to these cameras as a replacement for the dedicated camcorder or more commonly as a supplement to them.
Cameras such as the Canon 7-D do permit one to shoot extremely good wildlife video, but they are not nearly so user friendly as dedicated camcorders. It is beyond the scope of one post to describe all of the short-comings so today we will concentrate on the focusing issue.

While the cameras can auto-focus in video mode, it is quite slow and ponderous. One must partially depress either the shutter release button or the auto-focus button on the back to activate focusing and it does not follow focus while the record button is engaged. This means that manual focus is more effective in most if not all cases. but even manual focus is often difficult unless one enlarges the image by depressing the magnify button located on the top right side of the rear of the camera. One push magnifies-5x, two pushes-10X, and three pushes, or pressing the record button returns it to normal view, which makes it impossible to use the magnify function to aid in focusing on a moving subject. In addition, focusing on either still or moving subjects becomes much more difficult in extremely bright sunlight. 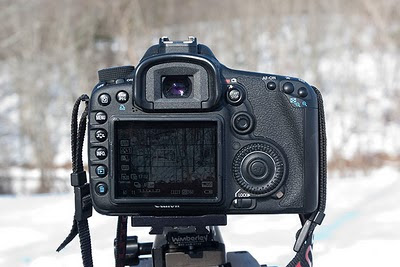 Focusing Is Difficult In Bright Sunlight
An answer to this problem is an add-on finder. At this time choice is quite limited, as only a handful of companies make these accessories. In time I would expect more companies to enter the field as shooting DSLR HD video becomes more and more popular. I chose the Zacuto Z-Finder because as far as I know it is the only one offering magnification (3x) of the viewing screen at this time. The finder currently fits the Canon 5D, 7D, Nikon D90, and the Panasonic GH1 and GF1. 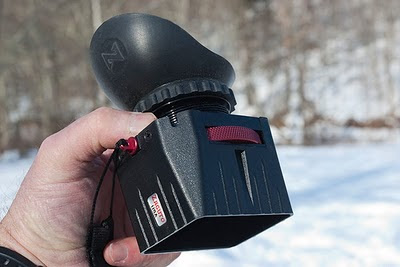 To use the Z-Finder one must first install a mounting frame on the LCD panel. This has an adhesive backing. One positions it correctly according to the detailed instructions, which are provided, and then lets it cure for 24 hours before use. The finder is then pressed over the mounting frame and is retained by the friction fit. Zacuto offers Z-Bands, which I have not purchased yet, to assist in holding the finder in place. It is made to be easily detachable as one may be continually removing and replacing it as they change between still and video mode. 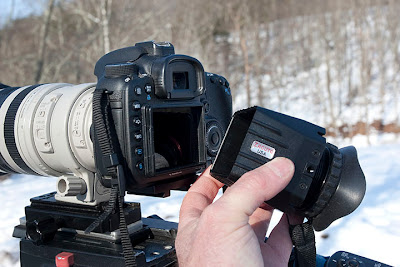 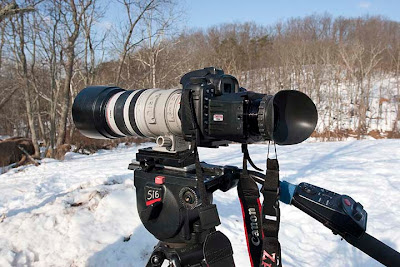 The finder is also fitted with a strap which one may loop around their neck or the camera itself, to support the finder when it is not in use. This also functions as a safeguard against dropping the finder.

So How Does It Work?

Well first off, although one should use a tripod when possible when shooting video, it does enable the camera to be shot handheld as it establishes a contact point between the camera and the forehead, such as one has when shooting stills with the traditional viewfinder. Focusing is greatly improved and follow-focus is possible, although still quite difficult. Even though the finder has 3x magnification, it still works best in conjunction with using the magnify button. The finder also eliminates the problem of seeing the LCD plainly in bright sunlight.

On the con side, it is more difficult to pan the camera smoothly while looking through the finder, and it can be tiresome standing with one's eye glued to the finder when filming for extended periods. But we had to do that with camcorders too, until articulating LCD finders where introduced a few years ago.

In summary, while not perfect, this is a very beneficial if not essential accessory for wildlife filming with these cameras, and has the added benefit of working well when shooting stills in live view mode.