I have had a lifelong fascination with whitetail deer and at times it seems that the only subjects I photograph are deer and elk. As a result today's Camera Critters photos are of whitetail deer.

Deer feed by grazing on grasses, or browsing on plant growth such as trees, shrubs and vines.
It is often to get a pleasing photographic composition of a deer while it is eating. Lets face it, a deer with its head buried in tall grass is not the greatest photographic subject. 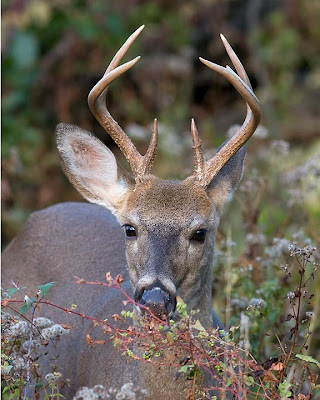 Buck Browses On Unknown Species Of Vine
The wounded buck, featured in the post of October 5th, "Vanishing Bucks-Natural Dispersal Or Criminal Act", is recovering from his injury. Deer are social animals and the second photo for today shows he and his older sister "grooming". I frequently witness deer doing this and it seems to be a combination of nibbling and licking at the others coat. I have speculated that the nibbling is sometimes removing ticks from the other animal. 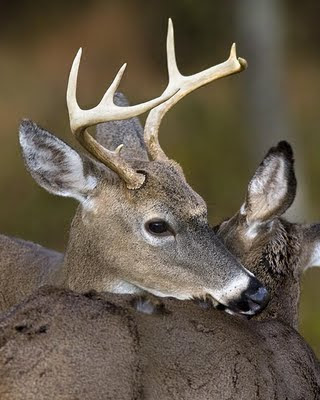 For more Camera Critters photos from around the world, Click Here!

It was Friday evening September 25th, 2009 and Elk Mountain Homestead was a busy place, with a lot of horseback riders skirting the edges of the fields and in one case riding into the center of the central portion of the meadows. Photographers and elk watchers on foot were also scattered about the area, while a number of elk ranged the meadows. 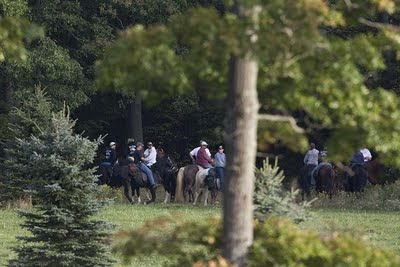 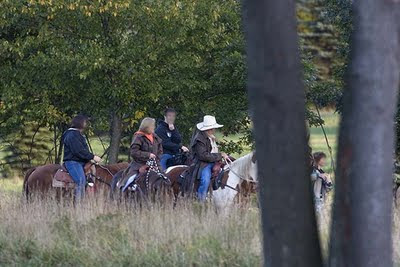 
A small group of people were strategically positioned near the center of the meadow complex, watching as this activity unfolded around them. As this was taking place another group of elk watchers and photographers parked near the driveway to Elk Mountain Homestead and walked directly to this area where the action was taking place. 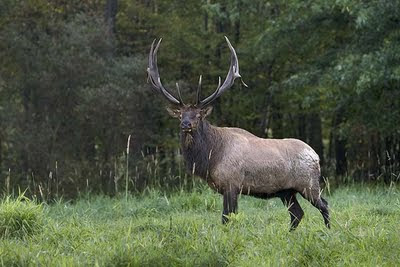 Encounter Occurred At Edge Of Woodlands Behind And To Left Of Bull
At least two of these persons are long time RMEF members, with those accompanying them being family members. In a short time they came near the group of people positioned near the center of the meadow complex. It turned out that this group was led by Cody Cogan, son of Rawley Cogan. Cogan accosted the leader of the group and asked him if he was the one who had the Homestead rented for the weekend. The leader said that he was not and asked if there was a problem. Cogan informed him that there was as the area was a wildlife sanctuary and he was not permitted to be there unless he was the person who was renting the homestead at present.

At this point the leader of the group told Cogan that he was a member and an official of The RMEF. As far as he was concerned his membership dues and donations had helped buy the property and he had every right to be there. He told Cogan that they had been over the controversy repeatedly with The RMEF leadership in Missoula, and that he and his party were not going to leave, at which point Cogan reportedly told him to enjoy his evening. He also inquired of Cogan as to why he singled him out for attention when there were numerous riders and several other persons on foot in the meadows also. Cogan reportedly said that this would be addressed in the near future by the St. Marys Chapter of The RMEF. According to the RMEF member, Cogan indicated that he had "dignitaries" with him. He also allegedly made the usual statement to the effect that the public should bear with them, and in a year the area would be open for the world to see.

This raised important questions such as what was Cody Cogan's authority in the situation? Why was he authorized to have quests there, while it was wrong for other RMEF members and family to be in the area? How is the RMEF going to address the problem with riders in the fields, if the RMEF has withdrawn from the project.

He may have been reflexively responding to a tense situation, with answers tailored to a situation in which his father was in complete control of the property, but at this point that reign was ending, unless Rawley Cogan was appointed by The Pennsylvania Parks and Forests Foundation, to continue spearheading the project.

At this point it appears likely that Mr. Cogan will continue to be involved with the project, according to an editorial by Jeff Mulhollem in the October 9, 2009 edition of Pennsylvania Outdoor News.
Posted by Willard at 12:14 PM 7 comments