It was late September, the peak of the rut, and Billie Cromwell and I were in Elk County recording the action. We were both shooting our Canon L2s.

On this particular morning we were traveling separately but were in the same general area. Suddenly I heard a tremendous amount of bugling just out of sight and I walked to a vantage point so as to see the cause of the disturbance. There were a few cow elk with several bulls in hot pursuit. I have seen such a frenzied spectacle only a few times in my years of recording elk.

The bulls represented a good cross section of Pennsylvania bull elk with at least two mature bulls in their prime, up and coming young bulls, and at least two bulls that were old and had less massive antlers than in previous years.

I videotaped the action from the top of a hill while Billie and others photographed them from another angle at the foot of the hill.

If you look closely there is a beautiful young bull in the third elk segment of the video clip. This is Fred who would be collared and numbered bull 36 quite a few years later. This was his first year with a branch antlered rack.

As far as I know, Hal Korber was the first man to incorporate footage of a full moon with elk bugling into a video production. Although I treat the subject a bit differently here, his work was the inspiration for the moon shot which begins the clip.

All of the segments in this clip were shot with the 400mm Spiratone Lens on the Canon L2.

I used the copyright insignia and closing credits to show the type of work I do, but I didn’t title the short clip. This is the type of work I hope to incorporate into my elk video, although this segment will not be included as edited here but portions of it will likely be used.

The clip is slightly over two minutes in length and is most likely impossible to view with a dial-up connection.
Posted by Willard at 11:03 PM 10 comments 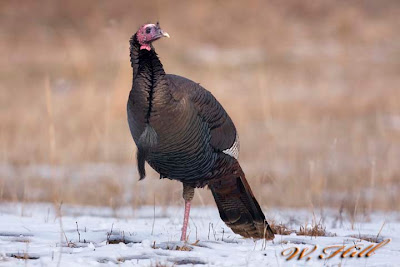 The Eastern Wild Turkey is one of the most skittish wildlife species. They ordinarily react immediately to any perceived threat, and vanish at the slightest motion or unusual object in their territory.

It is truly a pleasure to record and photograph these magnificent birds. While the head may be less than attractive in certain poses, it can be quite impressive during the mating season as it changes colors in rapid succession.

Their feathers have an iridescent hue when the sunlight strikes them at the correct angle. All in all they are a magnificent bird and worthy of the utmost respect. Benjamin Franklin, recommended that this bird be adopted as the national symbol, but the Eagle was selected instead.

Someone who truly understands these birds does not use the slang phrase, "(he,she, it, etc.) was a real turkey" to describe something or someone in derogatory terms.

This particular bird does have two legs, but has the one drawn against his body for some reason-possibly to warm it as it was a cold morning.
Posted by Willard at 11:01 AM 10 comments