An Evening To Remember-The Peak Of Pennsylvania's Elk Rut

As the sun slowly dropped below the horizon, a herd of elk grazed in a remote meadow on Winslow Hill, in the heart of Pennsylvania's elk range. Piercing bugles rent the air as a mature herd bull kept guard over his harem. His only challengers were small bulls. A large bull that could have been a contender kept his distance and spent most of the evening lying peacefully at the edge of the meadow. 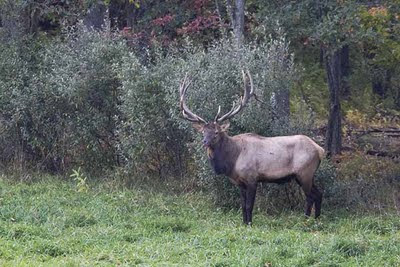 Mature Bull That Didn't Challenge The Herd Bull
The dominant bull repeatedly horned the earth at times, and strands of grass were draped on his antlers. What a wild sight as he ranged about the meadow chasing the cows and repelling the young challengers. 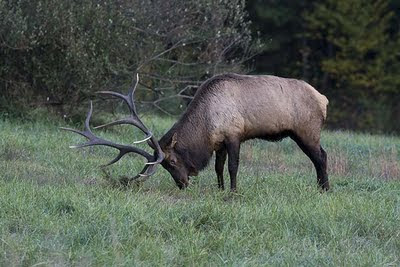 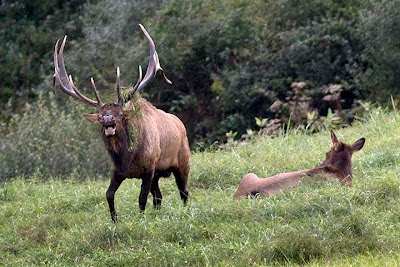 Dominant Herd Bull With Grass In Antlers: Enlarge For Better View
After the sun dropped below the horizon, the landscape was bathed in a golden after-glow, which provided a superb setting for a close-up photograph. 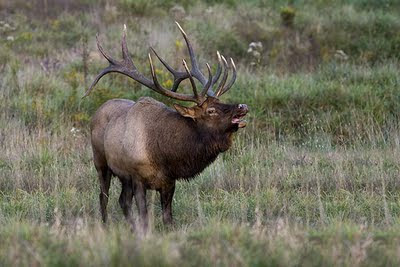 "Posing In The Afterglow"
As darkness fell the herd slowly traveled to a meadow near the parking lot where I had left my vehicle.

I brought up the rear, slowly following the herd at a safe distance and eventually they climbed to the edge of a steep meadow. The moon shone high in the heavens, and the air was filled with the tremendous thundering bugles of the large bulls and the high pitched squealing bugles of the raghorns. The herd bull brought the evening to a perfect close, by posing against the darkening sky. 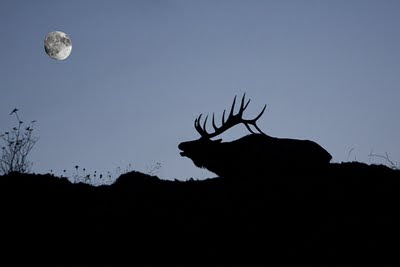 (This is a composite image, with the moon being photographed in a second shot and combined with the photo of the bull so that it could be placed in an artistically pleasing manner, but is indicative of what one may see in reality).

Note: Due to high sales volume "The Truth About Pennsylvania's Elk Herd" DVDs are currently out of stock at Benezett Store, but should be available again by mid-week.