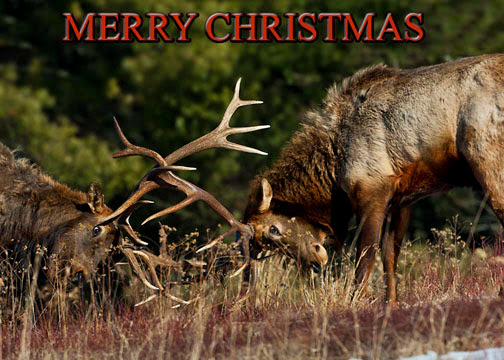 Merry Christmas to all.
Posted by Willard at 6:25 AM 6 comments

Each year one hears about hunters shooting what they assumed was a doe, only to find on close examination it was a buck that had already shed its' antlers. Most whitetail bucks in our area shed their antlers in early February. I have seen bucks that just lost their antlers in late December and early January. but it was not until this year that I was present when a spike buck lost both of his antlers in mid-December.

The buck is a small spike that did not disperse from his family group this fall and I have seen him almost daily since he was a fawn.  I saw him late in the afternoon of December 16th, as I was setting the cameras up and he still had both antlers.  Imagine my surprise when I looked up and saw that one antler was missing.  I tried to photograph him, but before I could get a shot he ran behind some other deer and when he was visible again, both antlers were gone. I did get some shots of the area where the antler attaches to the skull which is known as the pedicle. I wish I had a closer shot, but it was not possible.  As it is the photo below is severely cropped.

Sometimes bucks shed their antlers simultaneously or as in this case a few moments apart, but in other instances it can be days. The antlers in the photo below were found in mid-April of last year. They were evidently cast only a few seconds apart.

In the case of the spike, it is possible I could have filmed an antler actually falling off had I kept the video camera running and followed him from the time he appeared, but that was not to be.  It is possible to film antlers being shed,  but it has to either be a lucky accident and they just happen to fall off at the correct time or it has to be captured by an unmanned camera as humans do not have the time or the patience to keep a camera running that long.