After conversations with noted Pennsylvania Elk Photographers Ronald Saffer, and Terry Younkin, I have been able to determine that the Pennsylvania Bull Elk featured in the post of November 13, 2008 was taken during the recent Pennsylvania Elk Season.

This was another of the animals that was very trusting of humans. I first photographed it with a still camera in a meadow near the Gilbert Viewing Area on the evening of September 26th. The bull was resting in a reverting meadow and Odie Swartz, Terry Younkin, and I were able to move about freely in front of the animal as we tried to find a suitable opening through the brush and tall grasses through which to photograph the animal. We did not infringe on the animal's space, but rather remained a respectful distance from him. Finally he stood up and bugled in response to a challenge from another bull. 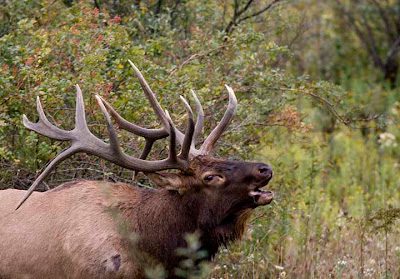 
Three days later Ron "Buckwheat" Saffer, Odie Swartz, Salty, and I had another close encounter with the same bull. This was about a mile from The Gilbert Viewing Area, and was in an area that was not so scenic. Salty and I were on a hilltop shooting down at the animal, while Buckwheat and Odie were at the foot of the hill shooting slightly up at him. 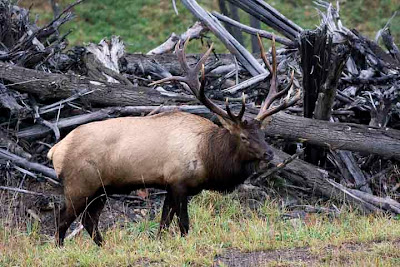 Not The Best Angle


At first it didn't occur to me that we were not utilizing the situation to best effect, but Salty pointed out that shooting from the bottom of the hill should give a much more pleasing view of the bull as we were shooting him against a background of short grass and piles of tree trunks that were created when the ground was cleared. 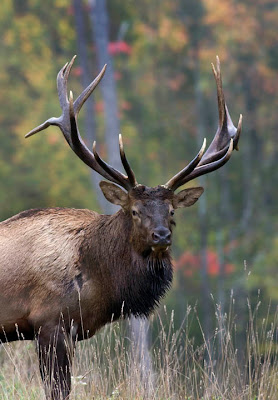 
After changing position we were able to utilize a much better background of tall grass and early fall foliage, plus the bull appears more impressive when one is looking slightly up at him. Shortly after we changed position, the bull followed a cow into the nearby woods and the action was over. 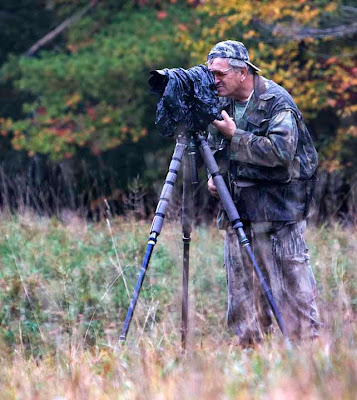 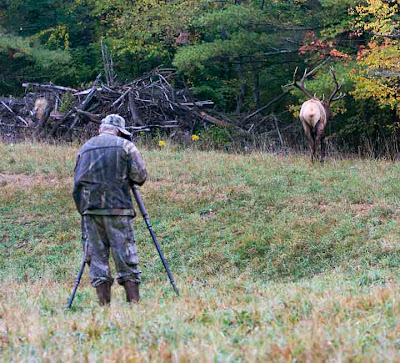 The Bull Leaves As Odie Photographs Him
As of yet, I have few details about the circumstances under which this animal was taken, but it seems it was killed well away from the viewing areas, (Spring Run area).

The controversies surrounding the management of these animals are examined in depth in "The Truth About Pennsylvania's Elk Herd", a 2hr-42minute documentary. The Film also deals extensively with the elk culture on Winslow Hill, and the life cycle of the elk. Click Here for more information on the film.
Posted by Willard at 9:53 PM 13 comments